We've been sitting here casually packing things up getting ready for closing on both properties and the real excitement has been how smoothly this whole process is going.  The move to Lytle is happening soon, but after last night, we found out it will be even sooner than we had planned.

So the buyers of our house did a walk-through of the home so we can be ready to close this Thursday.  The buyer's realtor casually mentioned that we had plenty of time to move and I casually responded that we wouldn't need the full thirty days.

"Wait.  What?" was her concerned response.

Look, we are old pros at this.  We've moved many times and most our crap is already either in storage or packed up just waiting for a truck, but the most difficult thing to arrange has been getting our hot tub moved.

It turns out that most hot tub movers are only equipped to handle your standard 8'X8' hot tub.  Ours is 8' X 11'.  Between companies that just don't return calls or e-mails to companies that admitted that was a bigger job than they could handle, we were stressing about how to get the tub moved.  And now, instead of having a month, we were in a pinch! 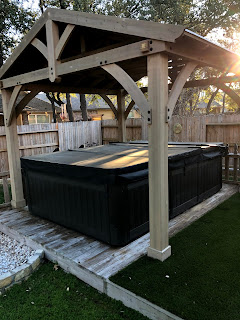 I finally called Family Leisure, the company we bought this and our older tubs from.  I explained that their folks hadn't returned any calls and the fact that we just had a sudden change in date for our move so these folks jumped into gear. It looks like they are going to schedule the move for us, so that was a huge relief.

Meantime, I reached out to the company we had lined up to move us in a few weeks and am looking to see if they can come out a lot sooner.  If not, we'll be UHaul'ing the whole house ourselves.

Like I say, this isn't our first rodeo.  The good news is, we'll just be moved in that much sooner, and that little change of plans is actually pretty exciting.

It's Saturday morning.  This time next week, I'll be picking up a U-Haul in order to get all the stuff we put in a storage unit to declutter the house before photos, moved into the garage of the new house.  I have thought more than once that we should maybe instead call Goodwill or some charity to just go take it all.  We are not hoarders in the way that you might see on TV, but damn, we have a lot of stuff. There is definitely a huge yard sale in our future.

A few weeks ago we had taken a drive down to Lytle in order to look at the house we are buying, and afterward, we went into a diner called Naomi's.  Naomi was a lady we met years ago at a place we used to go to for breakfast tacos.  We'd see her at the local HEB and her and Eva would chit-chat.  I always told Eva I liked Naomi's hair because she let it go grey.  At any rate, before we moved from Natalia, Naomi told us that she was opening her own diner in Lytle, and four years later, we were visiting for the first time.  She recognized us and we talked for a bit, just to catch up.

By the way, the food was great, and I'm pretty certain we'll be doing breakfast on Saturday's at Naomi's.

I mention Naomi's because one of the downsides of moving back to a small town is the fact that, as much as we like to eat at new restaurants and such, you can only eat at the same few places before they get tired.  A few weeks ago, my daughter-in-law, Nicole sent Eva this video made by a guy from Lytle who does YouTube videos and such.  I really liked his use of drone footage as well as his style.  Since then, I've been checking out all his videos and I listened to podcast he and his wife did called Real Life, Real Love.  Lots of funny stuff, but also, a view into a real family growing up in a small town.

I was told by another Lytle resident that we could be getting a Denny's in the future.  Wouldn't that be nice?  My preference is Jim's, of course, but Denny's will do in a pinch.
Posted by Dave at 7:58 AM 5 comments: Links to this post

The Excitement is Bubbling Over the Hot Tub Edges...

We are just a week away from closing on the house we are selling in Helotes.  It seems like in the same way this has all happened so very, very fast, the last week is dragging by.  But things seem locked in place and there is nothing for us to do but show up and sign papers.

The closing for the property we are buying has not been scheduled as of yet, though it is planned for the following day.  That makes it next Friday, the 28th of February.  From there, we have a huge flurry of activity with multiple things needing to fall into place.  We have some things we plan to move ourselves and that will all take place the first weekend.  Later, a few weeks later anyway, we will have movers come and grab the heavy furniture.  The final thing to go will be our big hot tub.

My first project in the new house is to build a large deck.  We have been toying with the idea of having an additional foundation poured next to the existing covered patio.  I've built my fair share of wooden decks in my day, but honestly, it is a lot of work.  The flip side is, having a cement patio poured (for the size I need) is pretty costly.

Eva reached out to our old handyman from years ago, Joel, and he remembered us from when he did work for us in Natalia.   He is going to give us an estimate on the cement patio.  We'll see.

Whichever way we go, the hot tub will eventually make its way and we'll really be ready to climb in and look up at the stars without all the city lights to blind us. 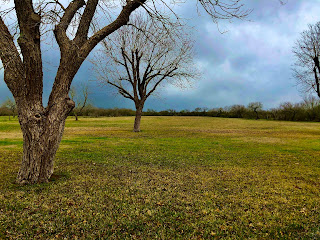 This is a view of the back yard from where our hot tub will sit.  I'm ready for that.
Posted by Dave at 5:30 PM 3 comments: Links to this post

Back Out Here: Destination Lytle...

In December of 2015, my wife and I made the move from Natalia back to the San Antonio/Helotes area.  We had really good reasons for this; grandkids.  We packed up, sold the house and moved into a new place.  A truly great house with all the modern features I wanted.  It even had a great yard where we set up our hot tub, built a fire pit, and well, that was about it, because the yard was so small.

Fast forward four years and we no longer needed for MaMaw to watch the grandkids.  As we lived in a regular city sized neighborhood with houses so close together you could open the window and spit from your side into the neighbor's house (if you were so rude), that urge to move started hitting us.  Add in to that the fact that so many of these builders think nothing of Texas sized trucks; the fact that people need a place to park when they visit; and the pains of pulling in and out of a driveway when some jerk has parked directly across from your house, we realized we just needed more space.

It's funny too, because we have often toyed with the idea of selling all our crap (furniture) and moving into a loft in downtown San Antonio.  We love The Pearl and all those places along Broadway.  Being downtown would be so convenient for entertainment and such.  But in the grand scheme of things, we only go downtown a few times a month.

We got with our Realtor, the fantastic Missy and her team (she has sold three of our houses now), and came up with a game plan.   By day two, we were under contract.

We had already made up our minds that we wanted to move back out to the area we came from and in fact, we looked at several homes in our old neighborhood.  One house we looked at was a stones throw from the house we sold in Forest Woods in 2015, and it was really strange to imagine ourselves moving in and driving by the old place each day.  That house still looks great, by the way.

After a lot of debating and making lists of pros and cons, we decided to go with an older (late 1990's) home outside of a neighborhood HOA.  The property is more than double the size of our old 3 acre place which means, I'm getting me a new zero turn mower!

The fact that the place is older meant we would start off with having to install all new floors.  We decided to bite the bullet and go with tile for most the house and carpet in the bedrooms.  Big job, but I think it will be worth it.

I think both of us are eager to get back out into the Tri-City metropolis (Lytle - Natalia - Devine) and get started on making the new house our home.  And if I'm able to get adequate Internet, I hope to share pictures and stories of our new adventures.

Until then, wish us luck.  We need to close on two properties then load up all our stuff and get to gettin' on with it.
Posted by Dave at 5:52 PM 2 comments: Links to this post