Well, This is Overdue...

So I feel bad that I sort of let this thing fall into Internet abandon.  As I get older, I sort of thought time would slow down, but it doesn't.  Here we are; five years later and the whole Living Out Here comes to a close.

My lack of blogging, of telling you about My Daily Deer, the places we got some good vittles from, or the exciting fun we've had out here with home improvement projects, none of that has to do with why I need to formally wrap this up.  Truth is, you'll be shocked to know that we've decided to sell the place and move back to, huge gasp, civilization.

We've loved our place in the country and it really, really is going to be a huge adjustment.  But having said that, the decision to move took all of ten minutes over some fried chicken at the Bill Miller's in Lytle.  It was sudden, but it was level headed and it was unanimous.

When we moved out here, it was honestly a new and exciting dream come true.  But we pursued that dream with both of our kids in the military and living away from home with no expectation that they'd be back in Texas anytime soon.  Fast forward and both are back in San Antonio with families and now we have grandchildren with more on the way.  Oh, everyone loves it here, but the truth is, they live in San Antonio out of necessity.  That makes for a lot of long drives.  You know Eva isn't letting those grand-babies go into daycare.  No offense to daycare.

So we contacted our Realtor (seriously, the best in the business) and the very first person to walk into the house a few days later bought it.  We were sitting in the truck waiting for them to leave and I got a text from the showing company that said: "Amazing home. Client is making an offer."  And they did; and then some.

Our reaction was an astonished, "Oh, shit, now what?"  We really had no plan aside from getting closer to the kids.

I'll spare you the details aside from saying that, again, if you live anywhere near San Antonio and you have the need for a Realtor, I could not offer a bigger recommendation; but we sifted through dozens and dozens of potential properties, none of which had any yard to compare to our three acres. 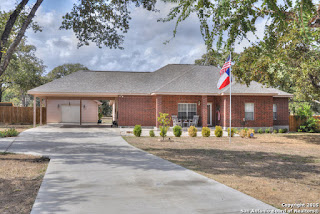 Living Out here has given us such tremendous enjoyment.  I'm only sorry that the blog of the same name never really was able to show how much enjoyment we got out of this place.  The small towns, or our Tri-City Metropolis of Lytle-Natalia-Devine provided us with some good restaurants, some really friendly folks and a truly nice place to live.

I did have a goal when we moved in and I said I did not want to wait to become an involved resident.  We started attending our homeowner meetings immediately, and before long, I was on the board, and as of this month, I'm still the board president. Again, I'll spare you the specifics, but I feel comfortable that I have left a very positive mark on my community and am saddened to leave behind a bunch of great neighbors who all have shared this dream of getting away from the traffic and the congestion.

We leave this place excited to move into a beautiful new home on what amounts to a postage stamp of a yard.  There is a Starbucks in walking distance (okay, driving distance for me) and we'll be able to gawk at pretentious shoppers at La Canterra while we enjoy a cool beverage at The Yardhouse or some similar spot.  It's all good.  In fact, now that we've pulled the trigger, I'm genuinely excited about getting more than dial-up speeds for my Internet.

As a final note, thank you for those of you who took time to read this blog and the previous one.  You know, I still get hits and comments and e-mails from the previous one.  I think the art of blogging has slowly given way to things like Twitter and Facechat and Grindr (I have no idea what I'm talking about), but for those of you who have stopped by to check in on us, thank you.

I would be remiss if I did not take one moment to offer my gratitude to those of you who have served as we take note of Veteran's Day.  I have too many family, friends, colleagues and neighbors who have served - the list could go on and on.  But I want to make a special note to think of our family friend, Dane Balcon and to fellow blogger Kieth Alan K's father, both of whom made the ultimate sacrifice for our nation.

Again, thanks for reading.

Thanks Dave for sharing your life with us. I hope you continue to blog or at least give us your opinion of the fine cuisine in the Central Texas area. As a native of the Austin area I love to see all the places you go that I 've been to as well. If you ever get a chance, drive up 281 to Marble Falls, the Bluebonnet Cafe has great pie and dinner. My folks settled there in Horseshoe Bay, and love it. I'm still in the DC area, so next time you are here, hit me up, First Beer on me!

At the end of the day Dave it's all about family and what makes you happy.......good luck in your new adventure I'm sure you'll turn your new house into a warm home.

I'll still see you and Eva on Facebook...and think you should blog about the places you go and see in San Antonio..if just for me..I spent many years there at Kelly AFB and Kelly Homes..would go visit my daddy when he retired there and miss all the places that were so familiar to me..and give us the lowdown on your grands...go to the zoo and the Alamo for me and post pictures..enjoy your new life in the big city.

Though I'm saddened to hear you're pulling up those country stakes and moving back into more densely populated digs. However, I do understand the desire and need to be closer to family. About the only thing that keeps me from moving up to the middle of the Adirondack Mountains is that I know me - and I wouldn't want to be that far from my family.

I do wish you well and sure hope you continue blogging. You're a talented and entertaining story teller. Your restaurant/eatery posts and photos are epic and legendary. And you're one of the good guys: an online neighbor I, and others, want to hear from.

ahhhh I always check to see if you have posted and have missed your posted, but am totally happy that you are moving on to be closer to your grand babies!!! Good luck and have fun writing the next chapter of your life!!!

I have often wandered while I was no longer getting feeds from your blog. You know me and technology :-(

I purchased a new computer and thought it might have something to do with the fact that I somehow managed to lose all my bookmarks.

Congratulations on the quick sell of your home and the future grand babies on the way.