We started our final day of the trip fairly early, partly because I was just eager to get out of San Angelo and partly because we knew we wanted to get to Kerrville and look around before getting back into San Antonio to pick up Gracie who was spending time with our daughter. 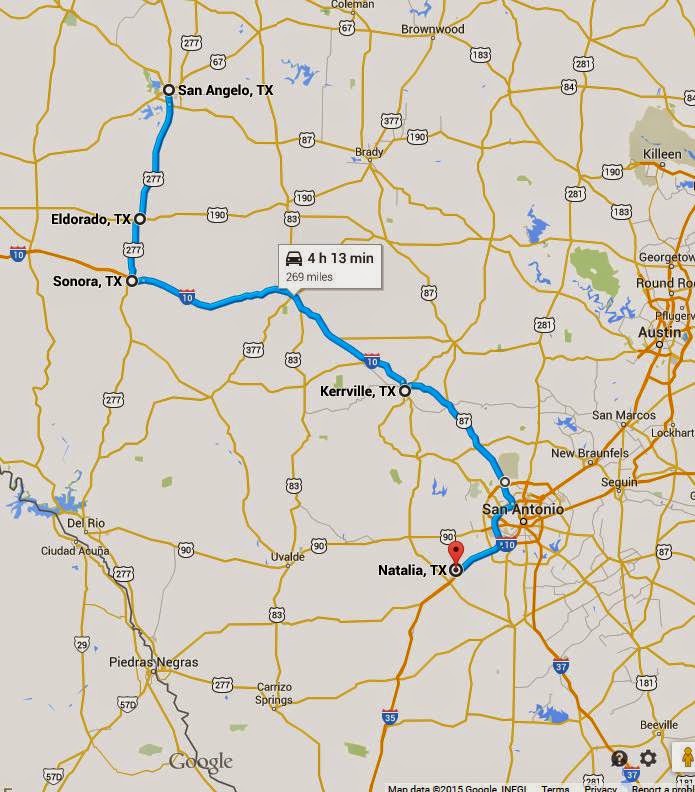 The drive took us from San Angelo, down to Eldorado and Sonora before jumping on to I-10 and heading east to Kerrville and finally home.

It was like magic.  Within minutes of leaving San Angelo on Highway 277, the view was suddenly wonderful.  Yes, it is pretty much nothing but wide open land with occasional hills or small buttes, but it was a clean, nice drive. 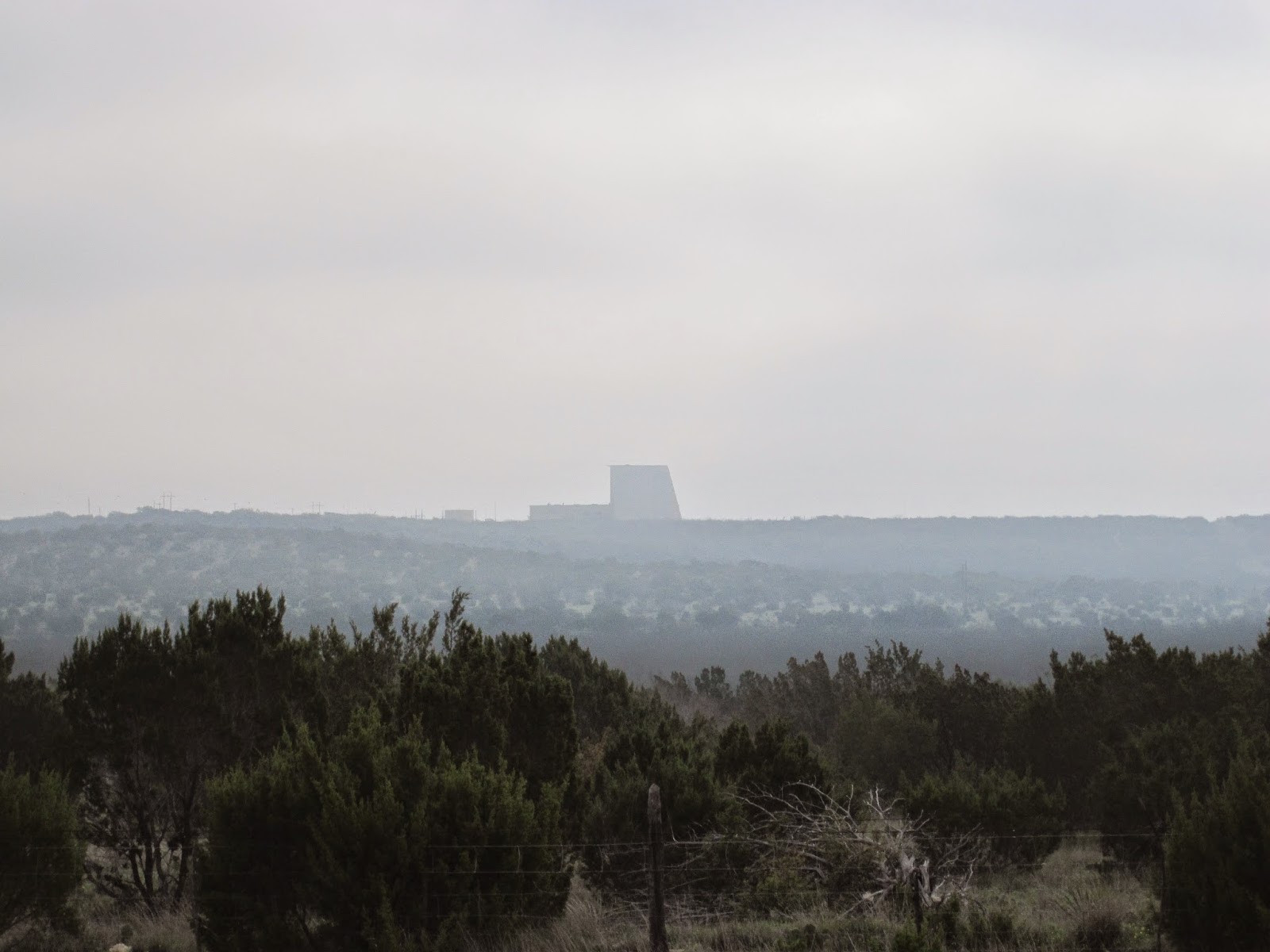 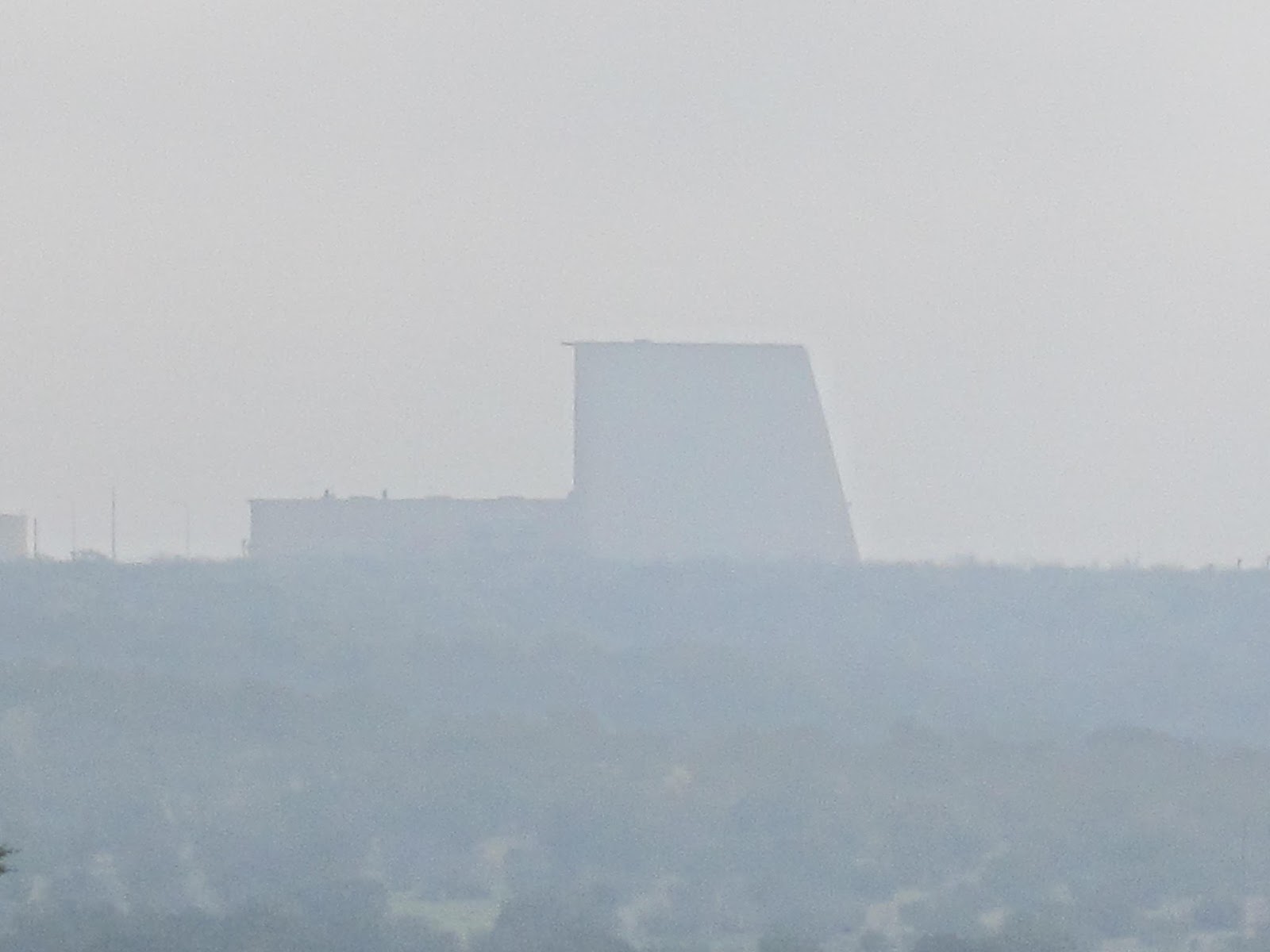 Just as we were getting into the small town of Eldorado, we could see the remains of the old Pave Paws radar off in the distance. It's a shame it was so foggy, but then again, that photo was taken from miles away.

When you drive through this part of Texas (hell, most of Texas outside major cities and towns) you realize that there is just so much wide open space.  I often imagine how many dead bodies are just 100 feet from the highway.  It is no surprise to me that cults take up residence out in the middle of nowhere. 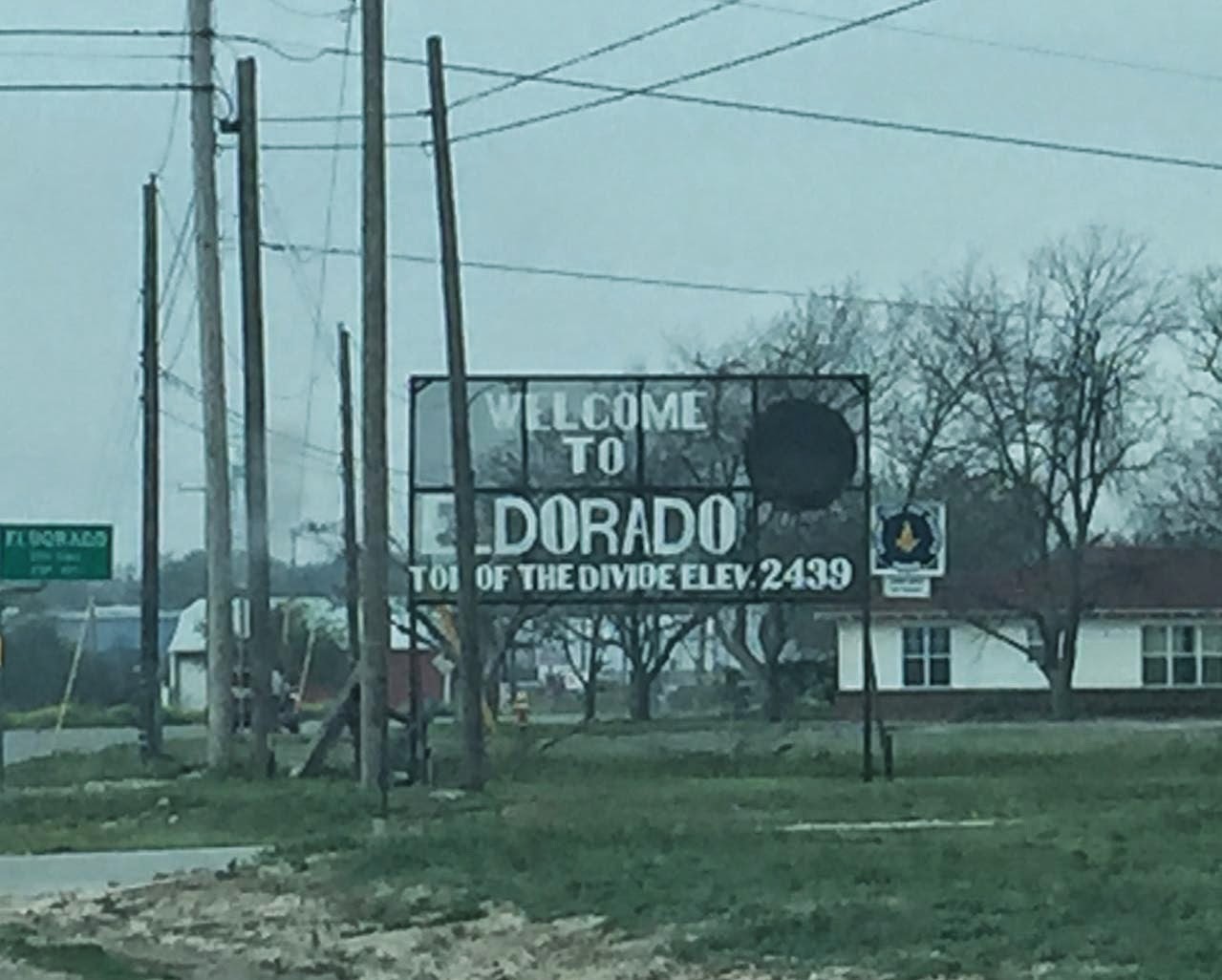 Driving through town we saw a small little radio station, KLDE, so I switched over and we listened to it for as long as the signal lasted.  I'm not sure if the guy we heard was the regular host, but he played just random tunes with no real format.  Oldies, show tunes, country, whatever.  I loved it. 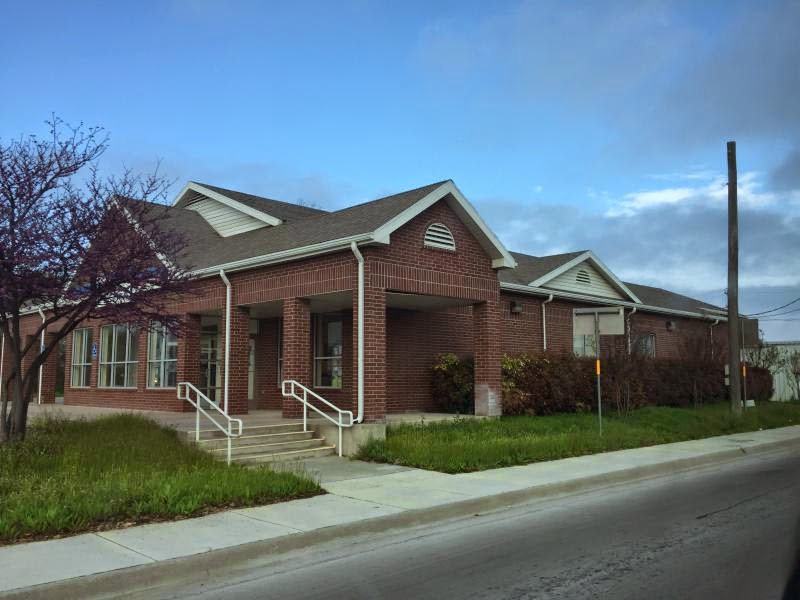 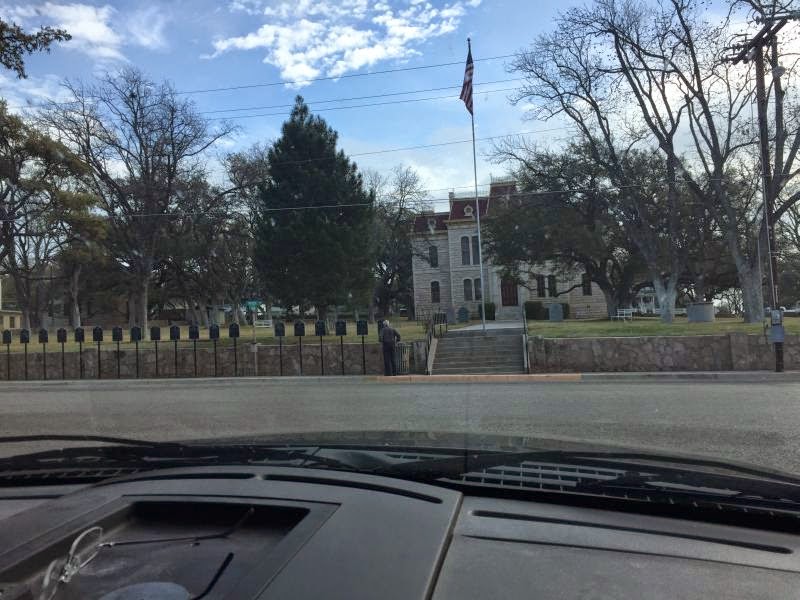 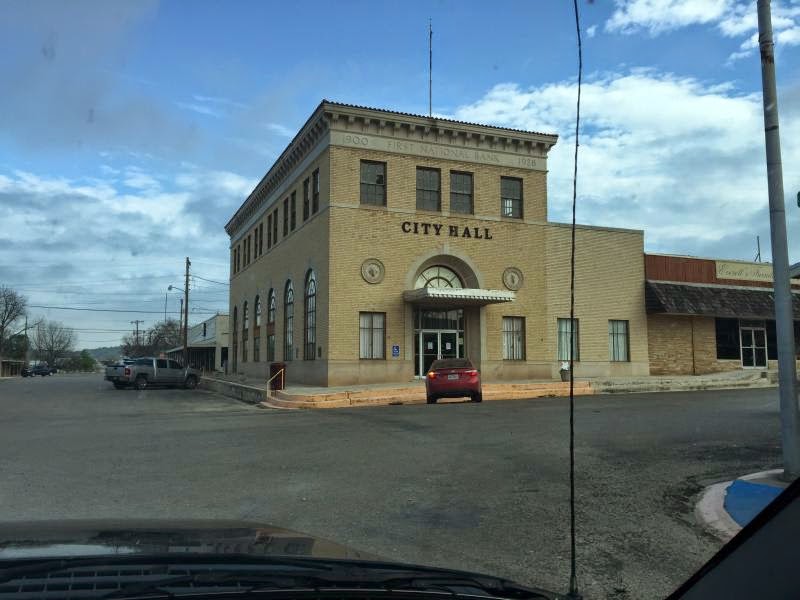 It wasn't much further down the road before we hit the small town of Sonora. Not far from the road are the Caverns of Sonora, probably a cool place to visit, but just not our thing, at least not that morning. 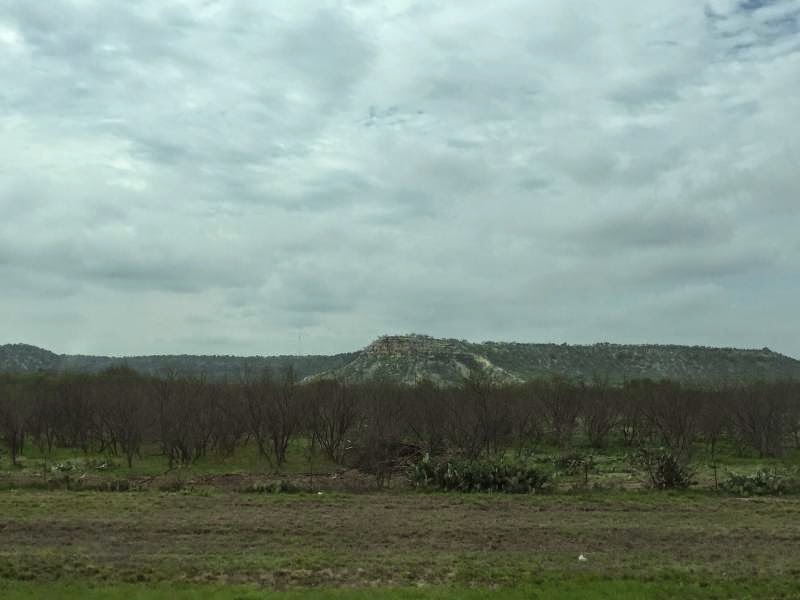 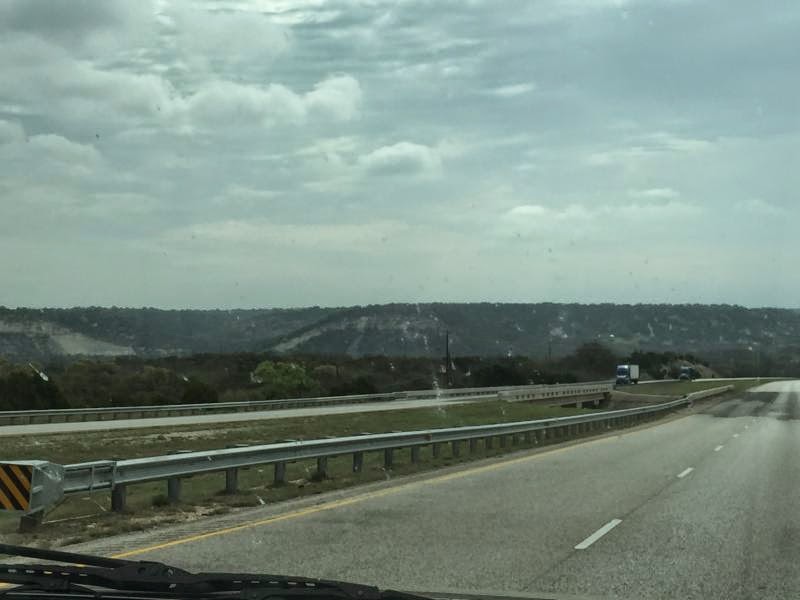 After a brief spin around the town, we were on I-10 and headed to Kerrville.  That part of I-10 is really beautiful and the road is well maintained.

We started to get a little rain as we rolled into Kerrville, but that wasn't enough to put a damper on our stop.  Just in town we saw a Visitor's Center, and decided to stop in.  There was an older gentleman inside who gave us quite a tutorial on what was where.  Holding a small town guide, he used pointing motions and inflection to give us a speech he has probably delivered a thousand times.  If you stop in Kerrville, stop and see this man. 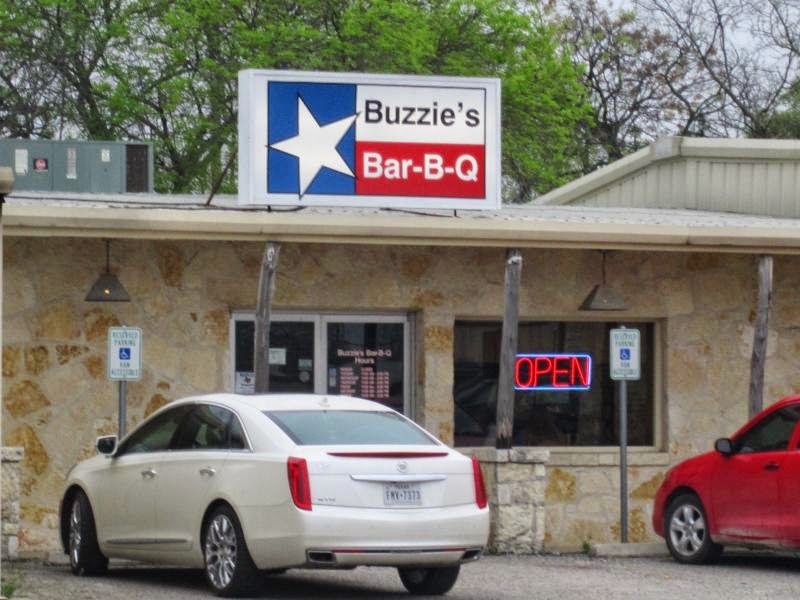 A young lady in the Visitor Center gave us a recommendation for a place to eat.  We  had mentioned wanting to get some Bar-B-Q, and she made a few suggestions, including Buzzie's.  We must have hit it just as the lunch rush was starting because by the time we ordered, the line was starting out the door. 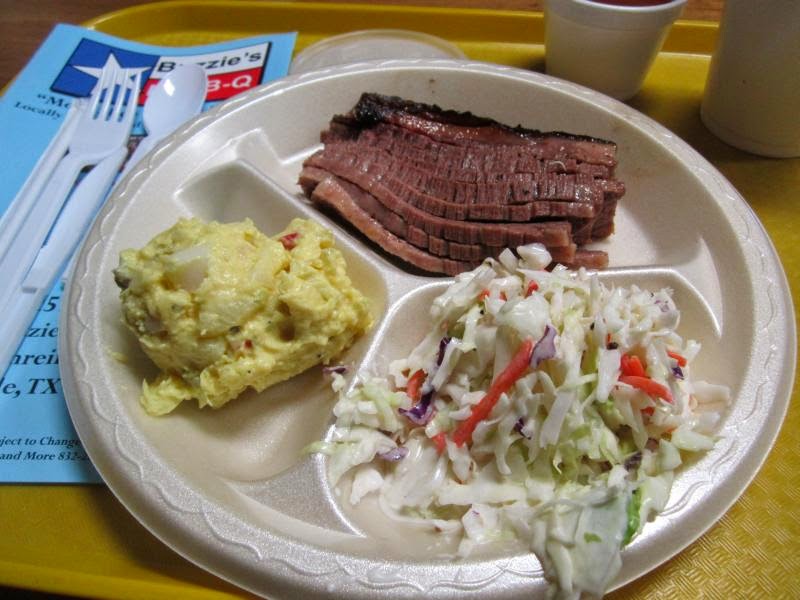 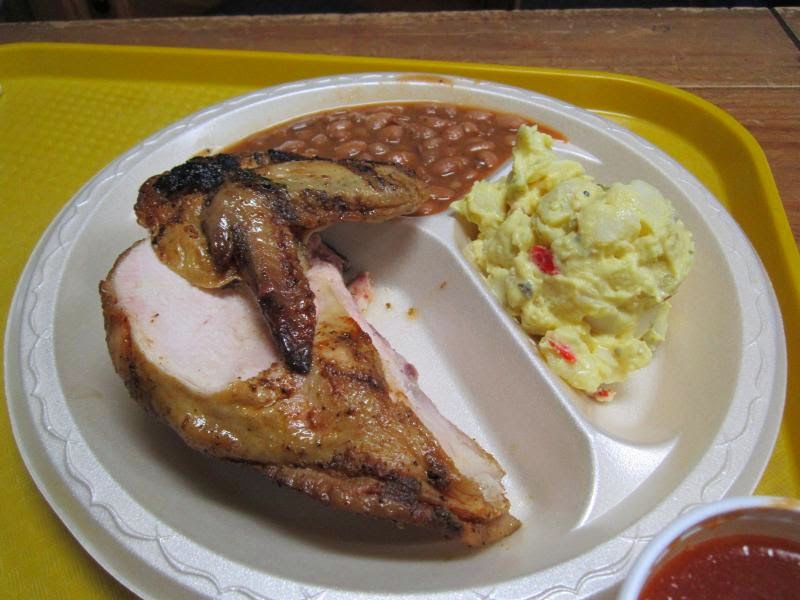 The potato salad was really good.  We did our usual thing of one getting brisket, the other getting chicken and then splitting.  I can see why people like the place, but I've had better.

We drove down the main street of Kerrville and headed west toward a small town called Hunt. 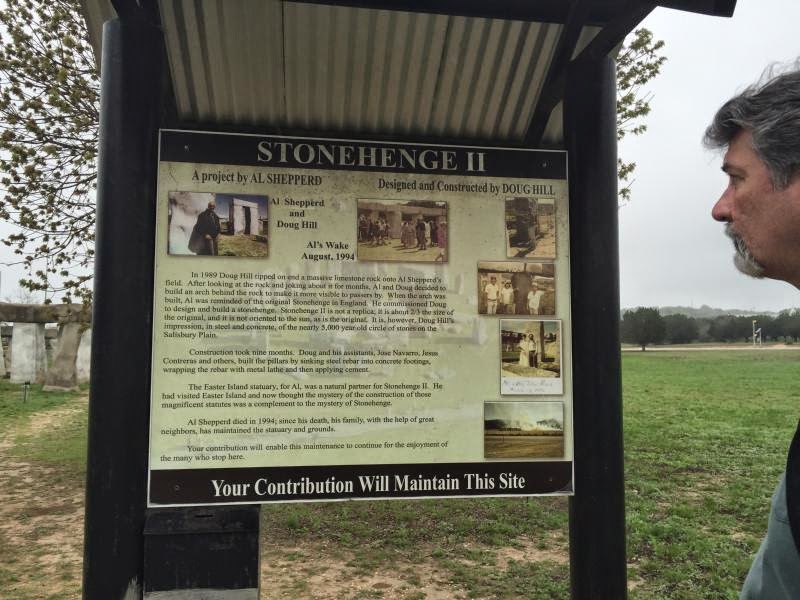 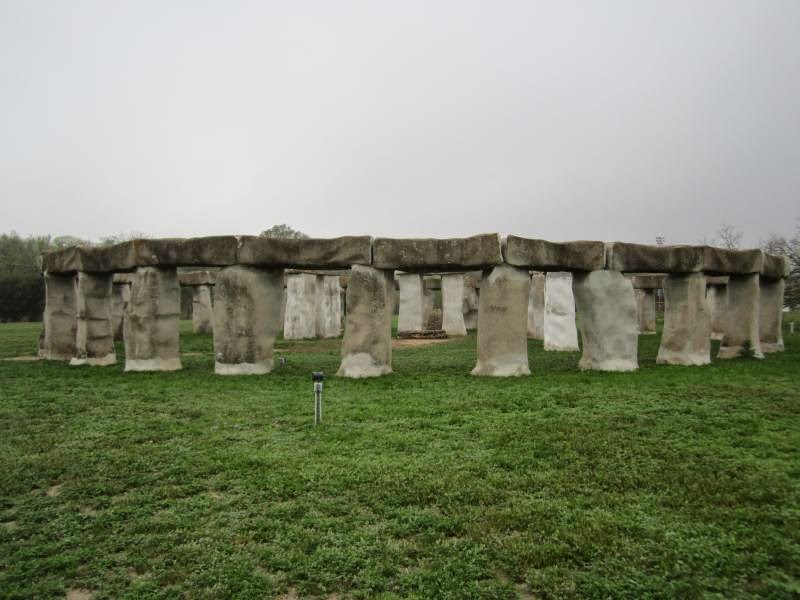 We had heard about this place for years but just never made the trip, and since we were just minutes away, why not take a quick look.  I have a passing interest in Stonehenge.  When I was stationed in England and my parents visited, my Dad was really interested in seeing Stonehenge as he had done some sort of report on it in college. 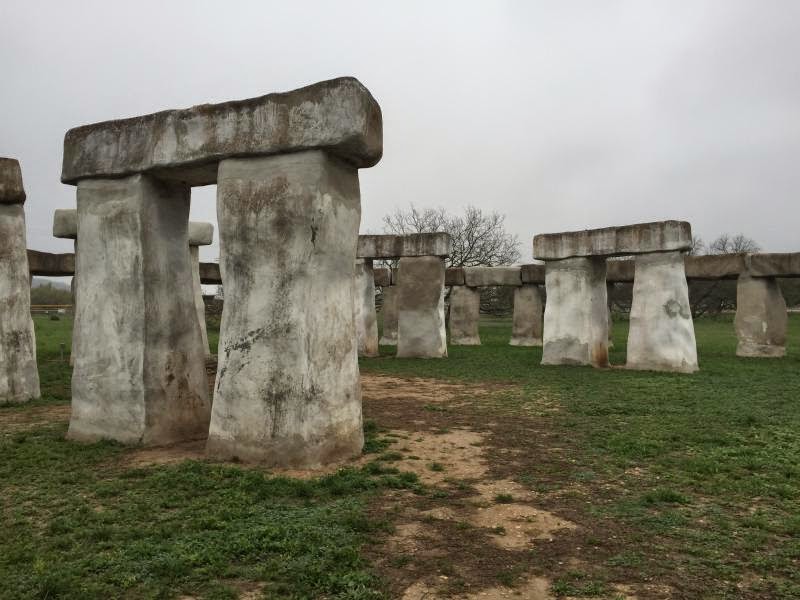 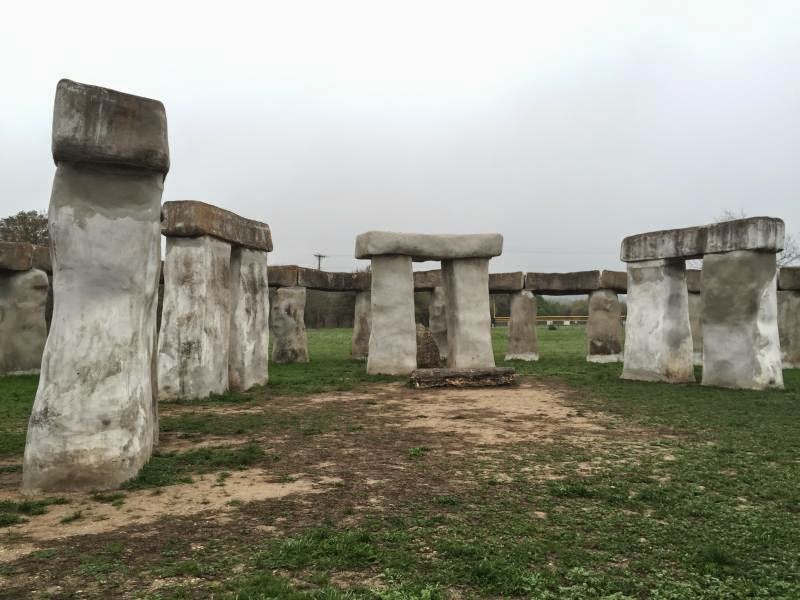 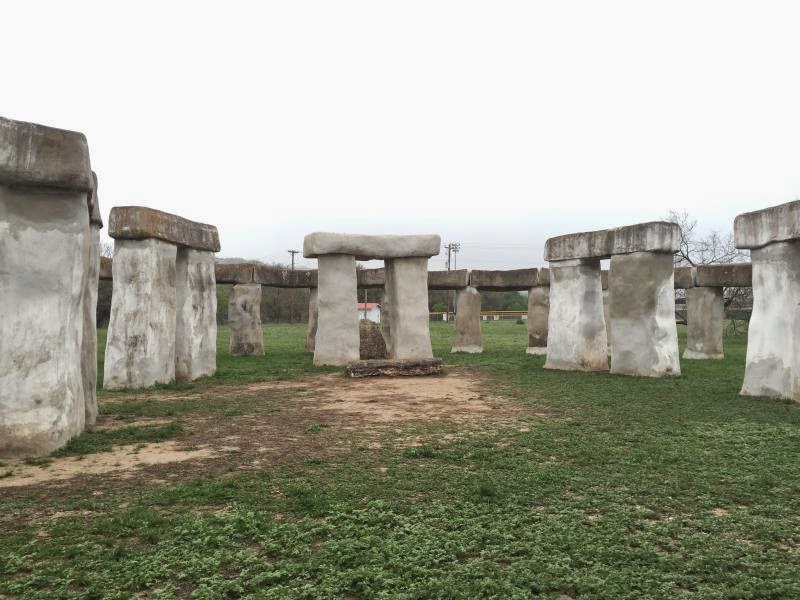 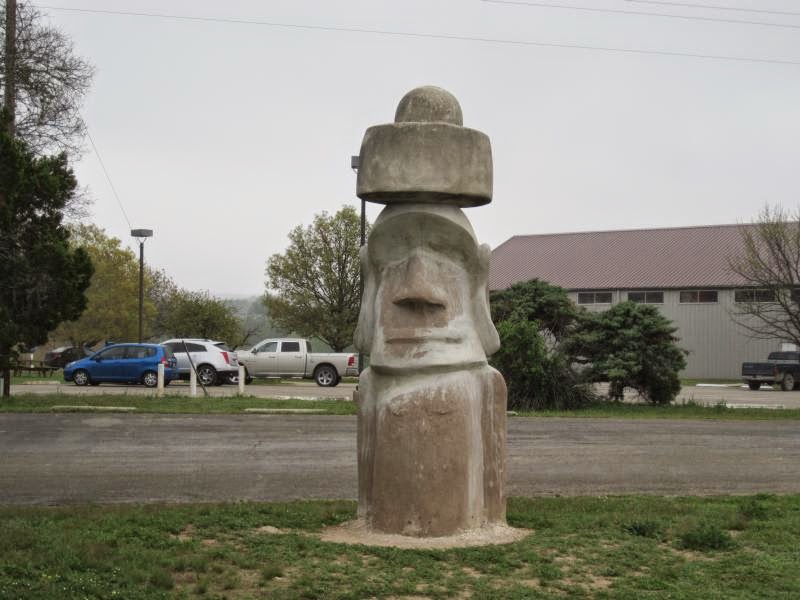 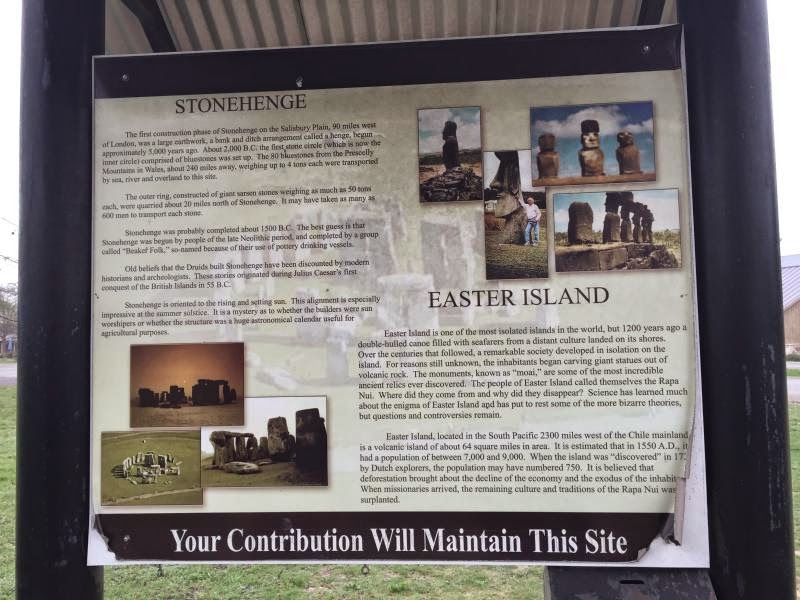 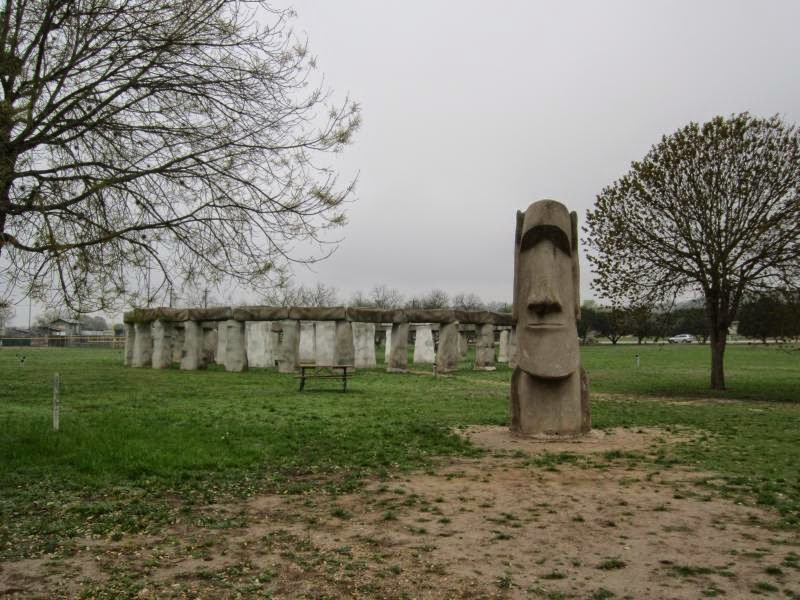 In addition to the Stonehenge II pieces, the same artists recreated the statues from Easter Island.  They are pretty cool.  This entire set-up is in a small park off the road and there are other art features inside.  Certainly a place to see if you happen to be in the area.

We tracked by through Kerrville and made the trip back home without further incident.  In all, this was a really nice little road trip with lots to see.  We definitely want to go back to Kerrville and perhaps spend a day checking out the shops and such.   In truth, we could have spent two days in Fredericksburg and two days in Kerrville and been happy, but it was nice to see Abilene and San Angelo and the small little towns in between.
Posted by Dave at 9:11 AM

I didn't know Texas had a stonehenge :) Now I have an excuse to make the trip. And I actually want to see the caves at Sonora, I saw signs for them on my way to visit my brother in New Mexico.

Ya learn something new every day, right?