It is hard not to find raccoons to be the cutest little creatures, right?  I mean, if you wanted to design a cuddly little stuffed animal for a child, I think the color and cuteness of a raccoon wouldn't be a bad design, as long as you didn't include the knife sharp nails.  I think it's that they are so lovably cute that our dog Gracie just wants to play with them.  Or at least stand at the base of the tree and bark and bark and bark, hoping that her dog language will translate into the raccoon equivalent of, "Won't you come down the tree and be friends?"

When we started noticing the cat's food bowl was constantly empty, we suspected that "Grandpa Cat", so named because our granddaughter calls him that, was sneaking around and eating it.  Little Kitty doesn't seem to mind him, but he won't come to me and let me pet him or hold him, and like the raccoons, he runs up a tree the minute Gracie tries to be friends.  Anyway, I decided to put the deer camera down by the cat food, and see if we could solve the mystery. 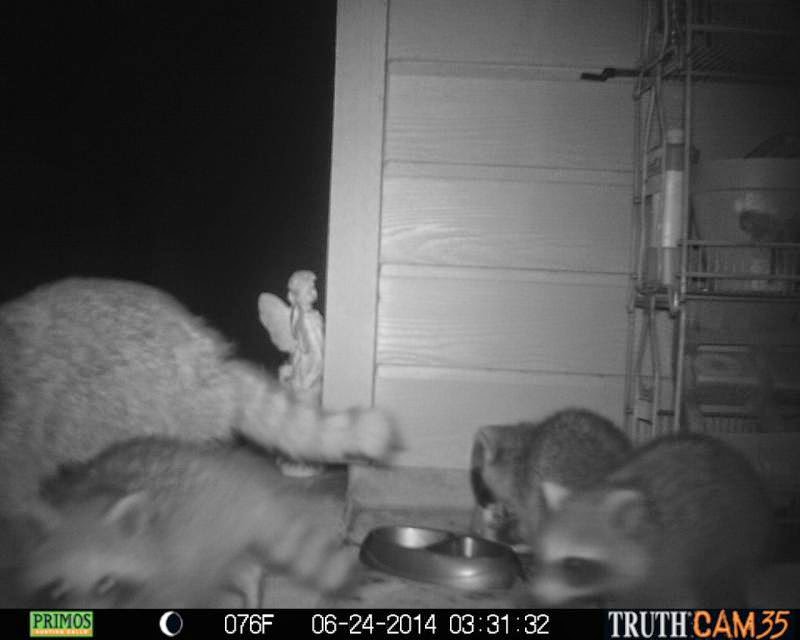 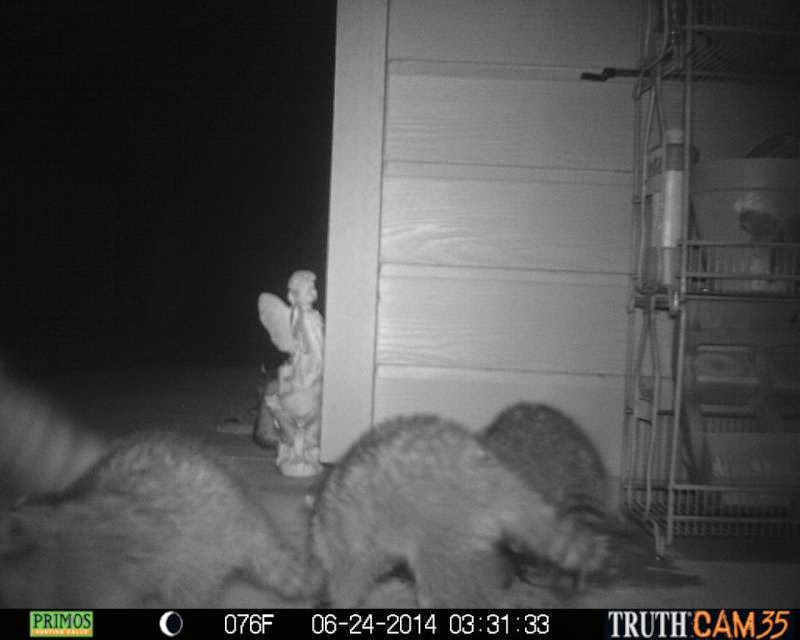 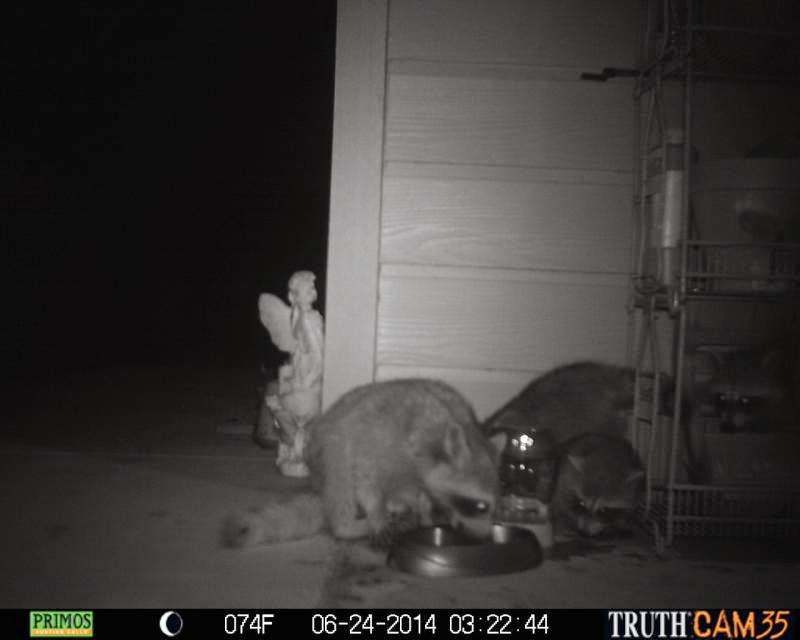 And there you have it.  Not one raccoon, but a family!  Aren't they just adorable? It may not be clear from the photo, but I can tell you there is a big fat mama and 3 little ones.    If you notice the time stamp, this visit is around 3 30 in the morning.  What a coincidence that Gracie has been waking me up in the middle of the night and wanting to go outside.

So after seeing the evidence, I figured out that I needed to bring the cat food in at night.  I know, you'd think I would have figured this out after the time I caught the raccoon in the garage before we converted it to a man cave.  But, since bringing the food in at night, I thought the raccoons would go down the street and steal from the neighbors (which it turns out, they do anyway).

Last night we were getting ready for bed and I thought I would let Gracie go out one last time.  When I opened the door, she pushed the outer storm door open and right there in front of us was all four raccoons finishing up the last few kibbles of cat food.  I ran out after the dog and of course, the raccoons took off running.  The three little ones scurried up the first tree and the mama went to the second tree with Gracie close on her tail.  That thing made the ugliest hissing sound which scared me more than Gracie.

While Eva searched for our flashlight, I grabbed the .22 and slipped on my shoes so I could get Gracie back in.  I saw the big one in the tree but wanted to get Gracie in the house, lest I shoot the raccoon and have it drop down and now have to deal with the dog wanting to lick a dead critter.

By the time I came back outside ready to go all Rambo on the raccoons, they had taken advantage of the opening and scurried away.  I'll be honest, I'm not a hunter (not that I'm opposed hunting, at all), and the idea of shooting these critters doesn't appeal to me in the least, but I'm pretty sure the cuteness has run its course.  That cat does not seem to care about the raccoons.  In fact during all the commotion, she just sat there watching with little interest.  But the idea of Gracie getting ahold of one of these guys (or one of them getting ahold of her) does not interest me at all.

Eva wants me to sit outside like a sniper in hiding tonight, then start picking them off when they come back.  I think I may just bring the cat food in earlier.   And keep the gun close by. 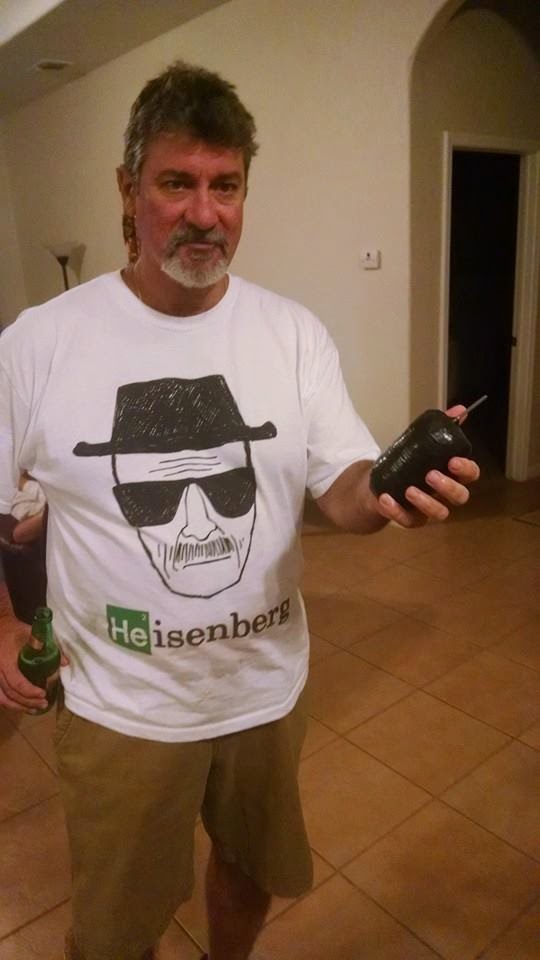 On Friday night, we had a bunch of folks from the office come by to eat some burgers and dogs, and pop off some fireworks.  At some point, a few folks decided to make a huge sparkler bomb with lots of sparklers and some electrical tape.  Kids, don't try this at home.
The result was a big boom!  Like shake the yard and rattle the windows type of boom.  If only we could put this technology to use against the raccoon problem.

------<<<>>>------
We caught up on a few movies Saturday.  Admission with Tina Fey and Paul Rudd.  I caught the first 10 minutes and slept through everything until about the last 20 minutes.  That was a nice little movie.  We also watched This is the End with all the popular comedians.  Lots of good laughs but really, really stupid.  I'd recommend it for people who have no real taste in movies.  Oh, on Friday night we sat out in the man cave and watched The Purge.  That was a good one. 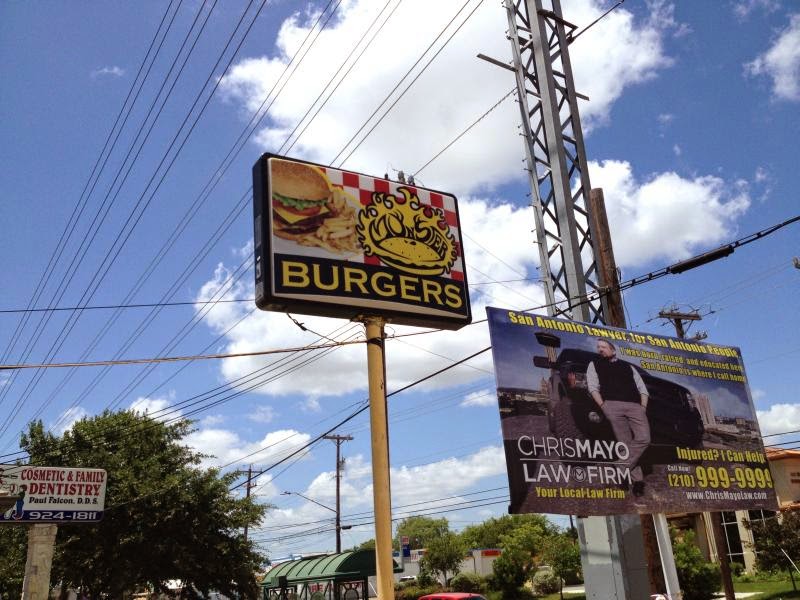 Today we ran out for a quick burger at a place I saw mentioned in a Facebook group.  The place is called Monster Burger located just north of SW Military on Pleasanton Road. 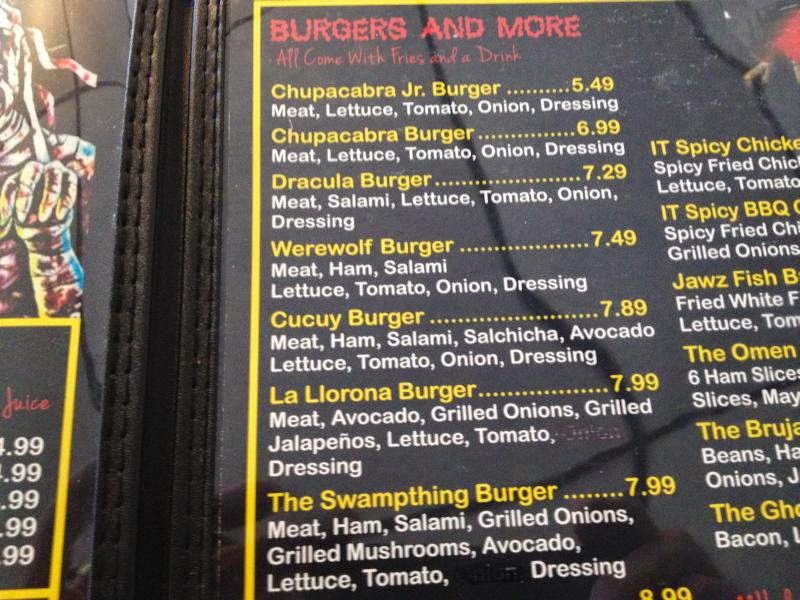 The menu is made up of burgers and such named after your scarier things.  So you have your Chupacabra, your Dracula, La Llorna and the like.  As a bonus, they were playing AMC's Walking Dead marathon on the TV.  What's not to like? 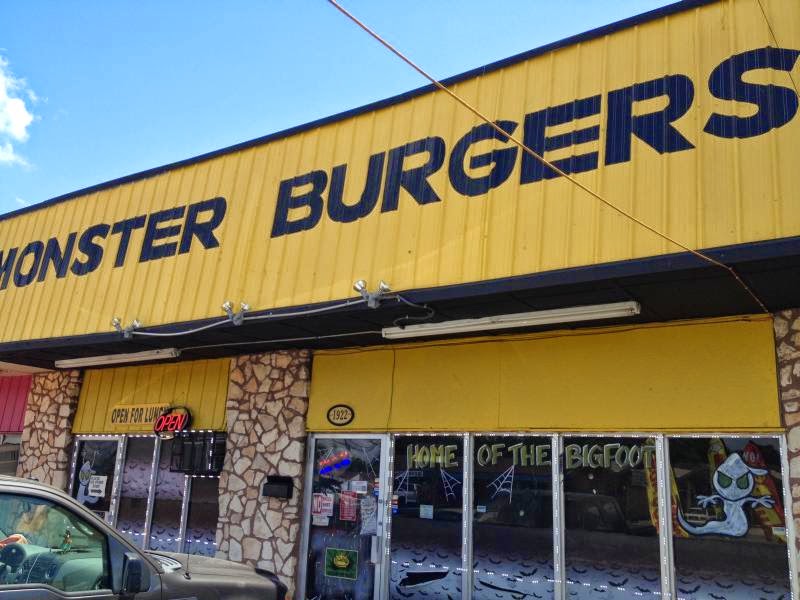 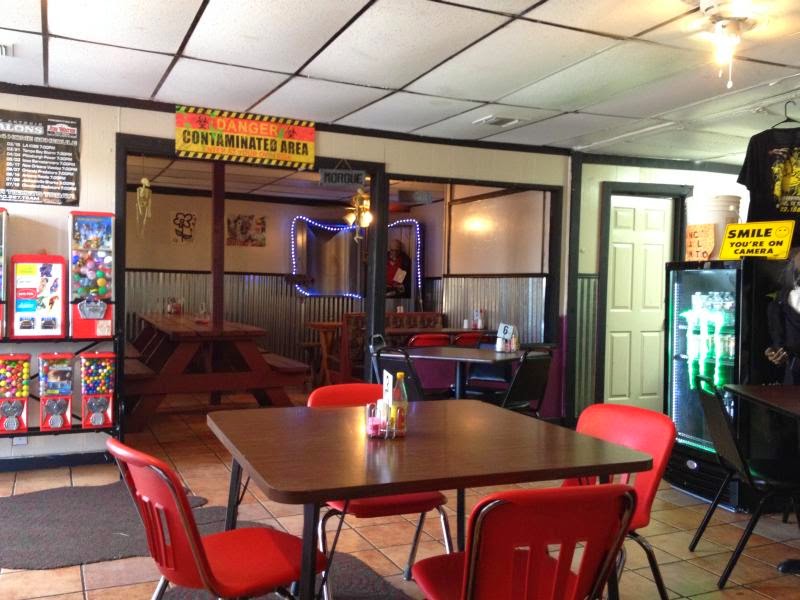 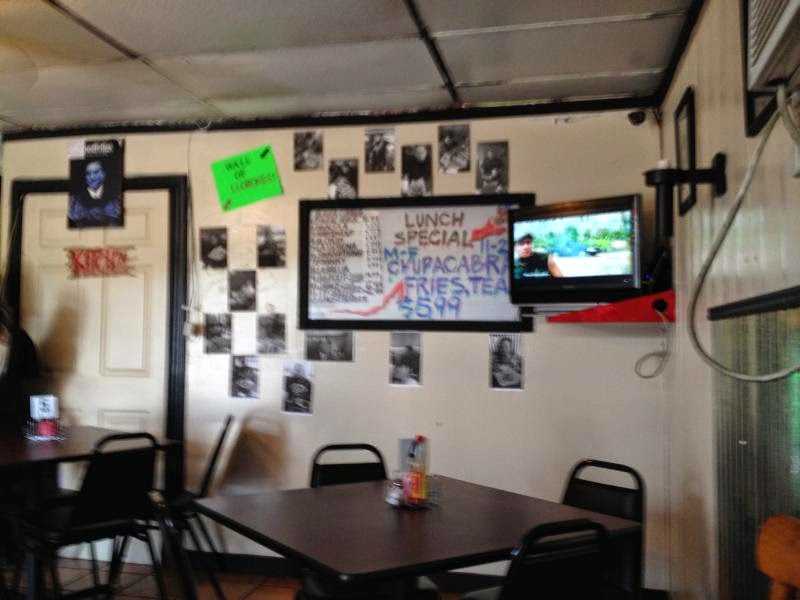 The place is definitely classified as a hole-in-the wall, and seriously, don't let the looks from the outside stop you from going in.  The folks there were as friendly as could be. 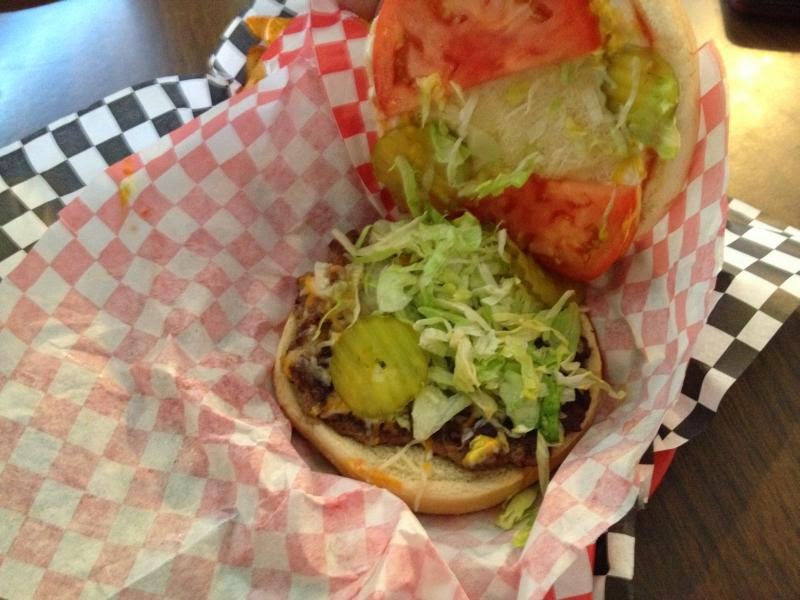 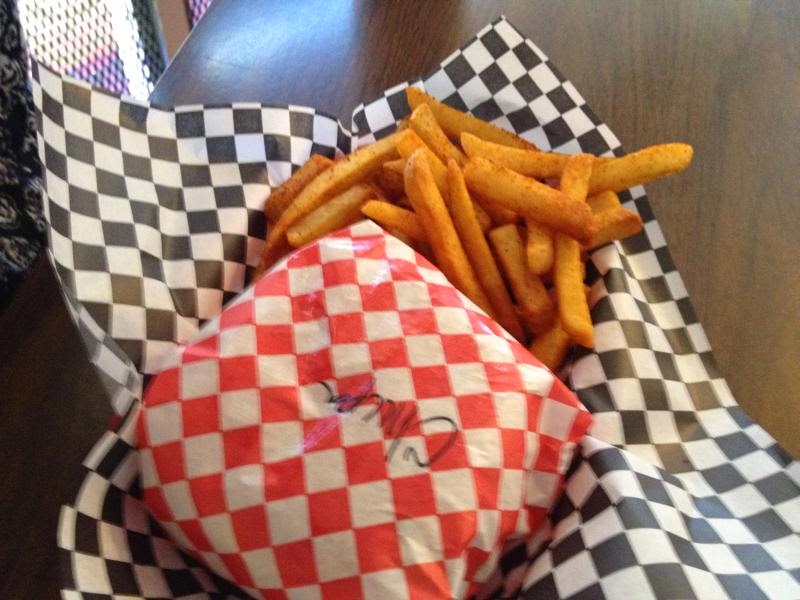 Eva had the Chupacabra which is the basic burger.  You'll notice the fresh lettuce, and fixings and the seasoned fries that come with it.  The hand packed patties are moist and delicious, the toasted buns fresh and soft. 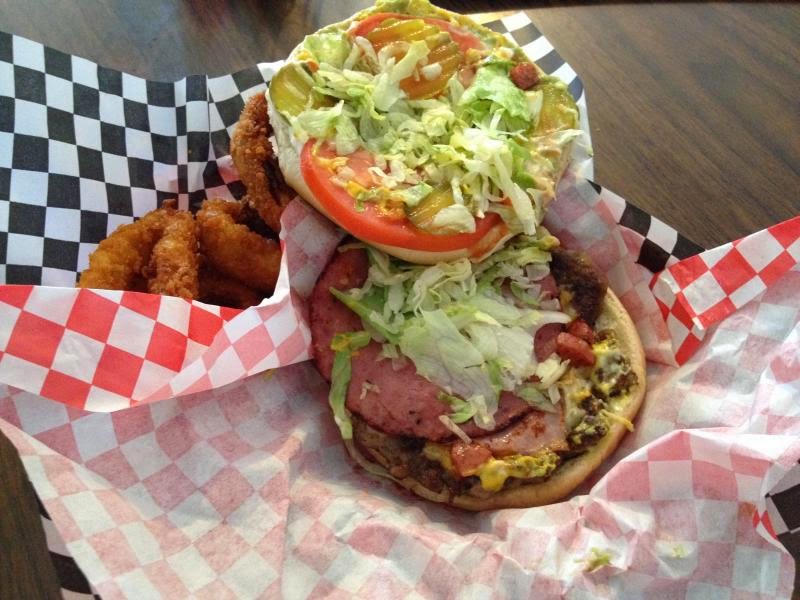 I went with La Cucuy which comes with salami, some sort of sausage and avocado.  Very juicy and very good.  I subbed the fries for onion rings, and while they were good, they probably had come frozen versus made fresh in the kitchen.  You can't have everything.  This idea of adding additional meats onto the burgers is something that originates in Mexico, so says the cook whose father concocted the burger menu.  I would have never thought of having fried salami with my burger, but it was great. 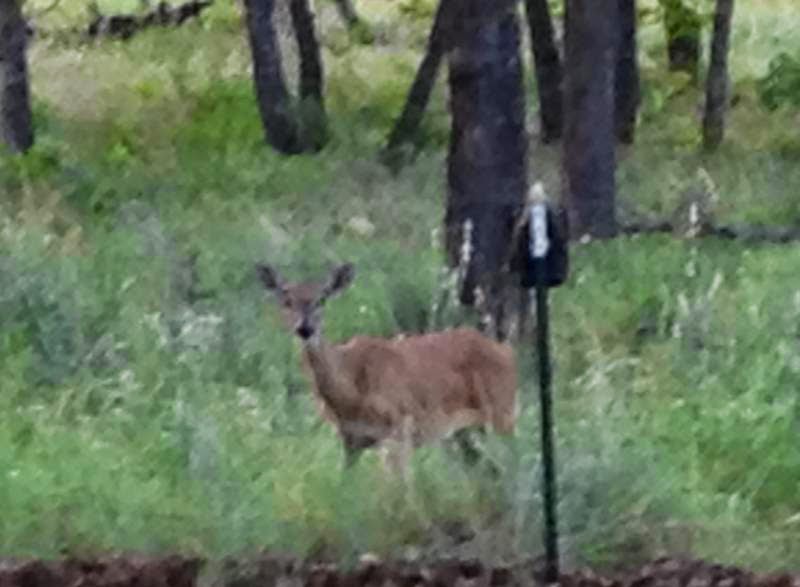 This little guy has really been sticking around here for a few weeks.  The other day, I walked outside and he was up close to our porch but as soon as he saw me he was off like a shot and over the fence where he promptly stood there and looked at me.  I think he is thirsty since he was close to the water hose. 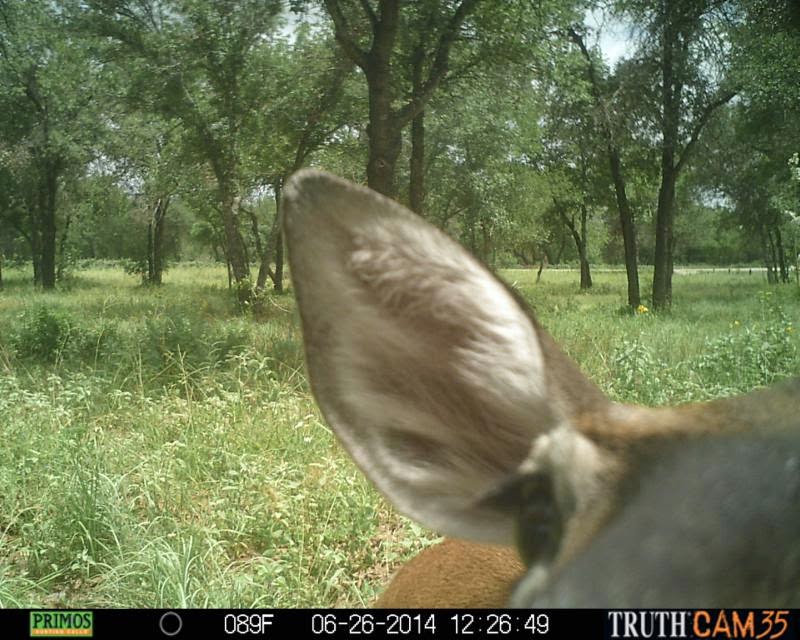 This is his ear. 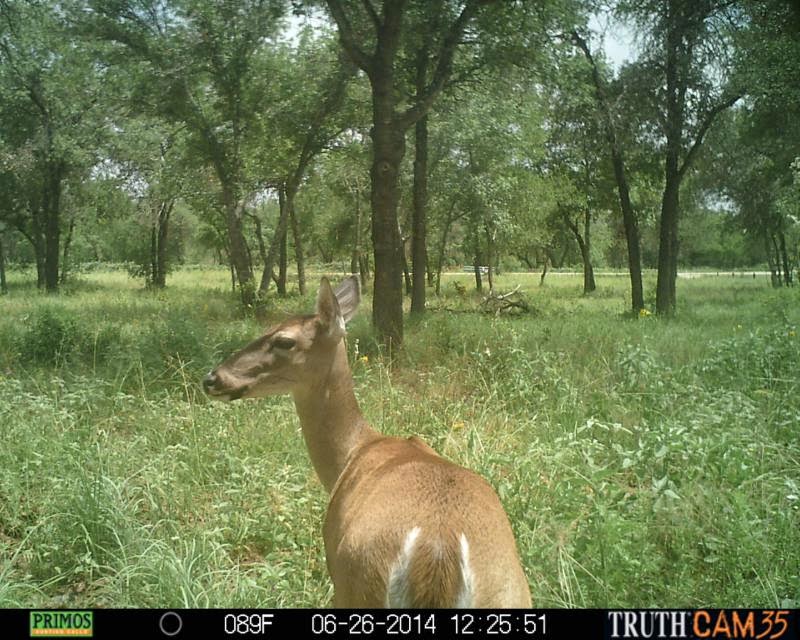 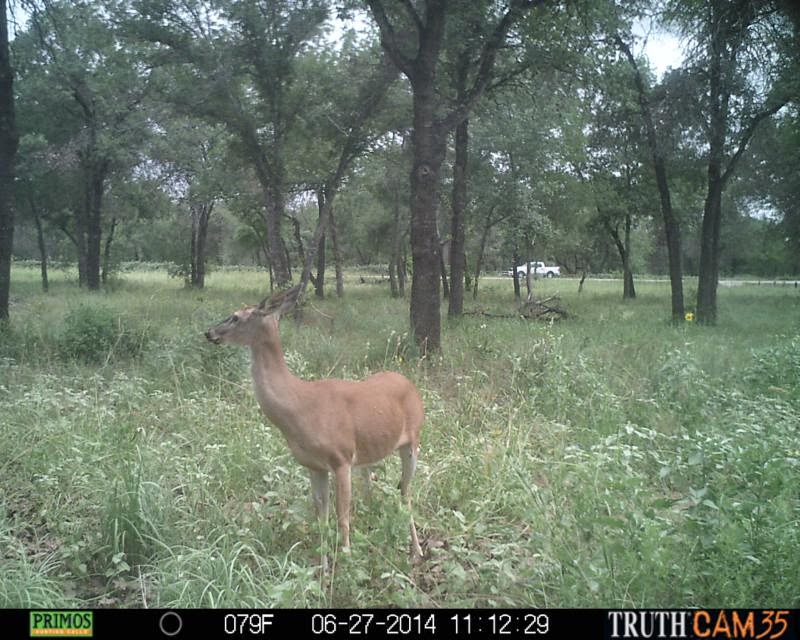 He's just been hanging out. 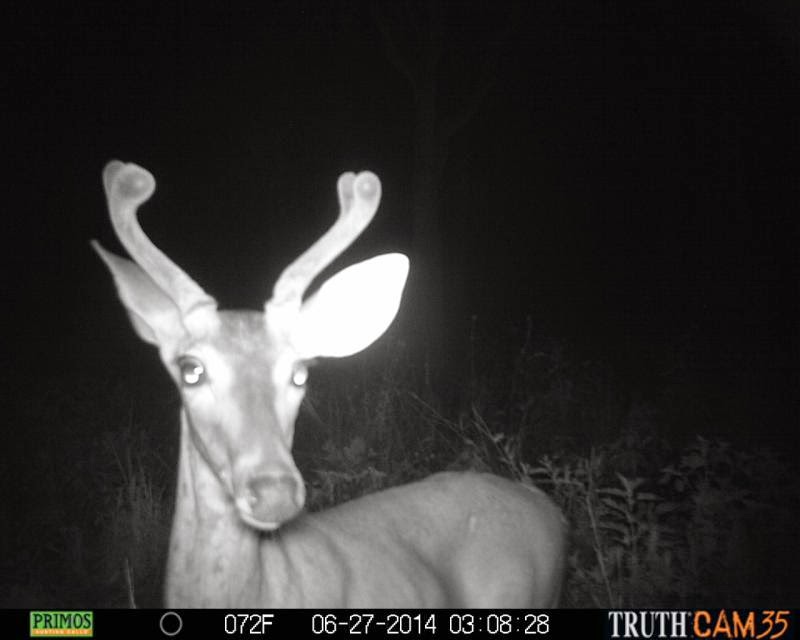 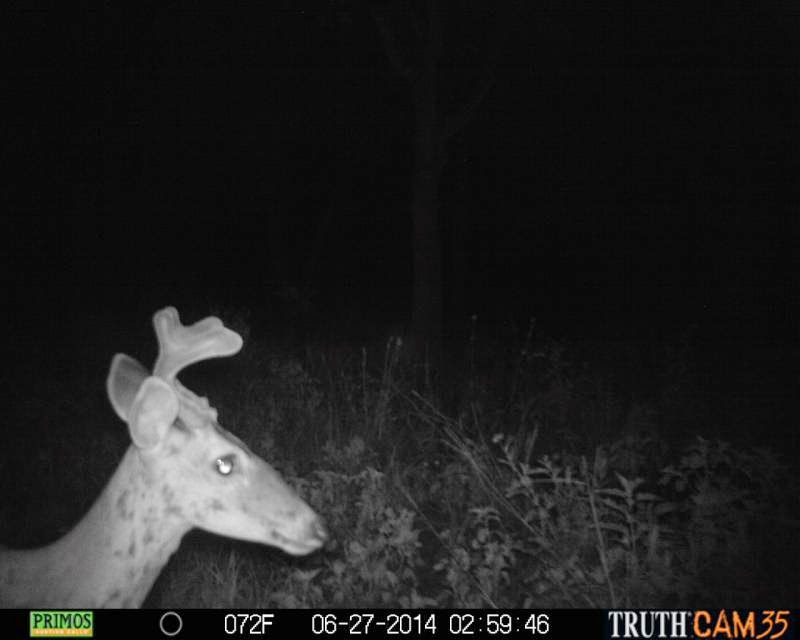 And this is what it looks like when a little reindeer starts to get his horns.  They look so soft and felty.  I know some people really dislike the deer but I'll take the cute deer over the cute raccoons.
Posted by Dave at 3:01 PM

I hope you don't have a cat door. The raccoons will come inside your house to get at the cat food. I've seen it happen.

Well hell now I just might have to get me a cam. Saw what I'm pretty sure are hog prints in the driveway the other day...

I don't think they can jump up high,their fat bodies aren't made for it, they can climb though. I'd put the cat food up high on something they can't climb on but the cat can jump up to. They wash their hands in water too, I'm sure you noticed her water is filthy after they leave.

They wash their hands in water too, I'm sure you noticed her water is filthy after they leave.

Okay. That explains a lot. I had no idea.