Over a month ago I saw an article in the SA Express-News (online) food section talking about the latest  Jason Dady food place, this one in the Southtown district of San Antonio.  I immediately fired off an e-mail to our fellow foody friends from the old neighborhood and after triangulating our calendars, the date was set. 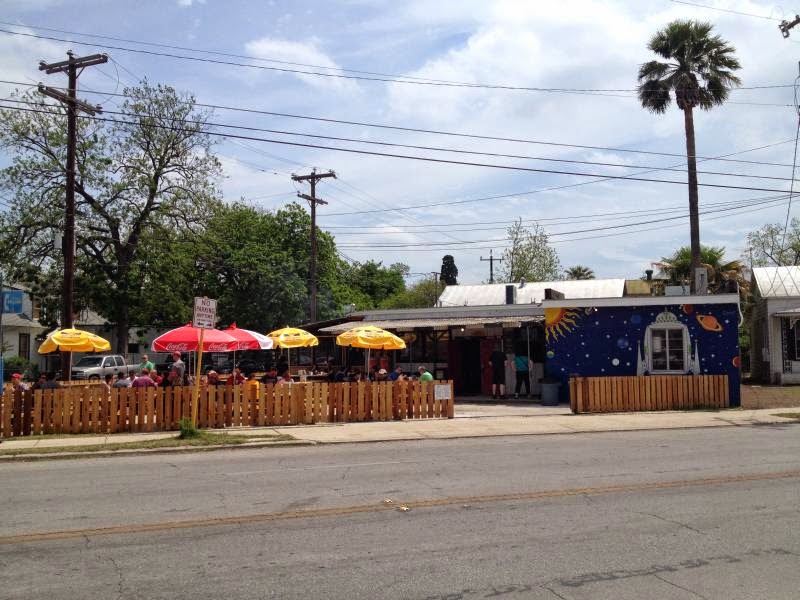 You can read the background on how B&D Ice House went from being a place to get a cold beer on a hot day to a place filled with the delicious aroma of Texas BBQ and grilled jalapeno poppers on their web page, but the gist of it is, the folks from The Friendly Spot (just across the street) teamed with the Dady brothers and transformed the place into some seriously good eats. 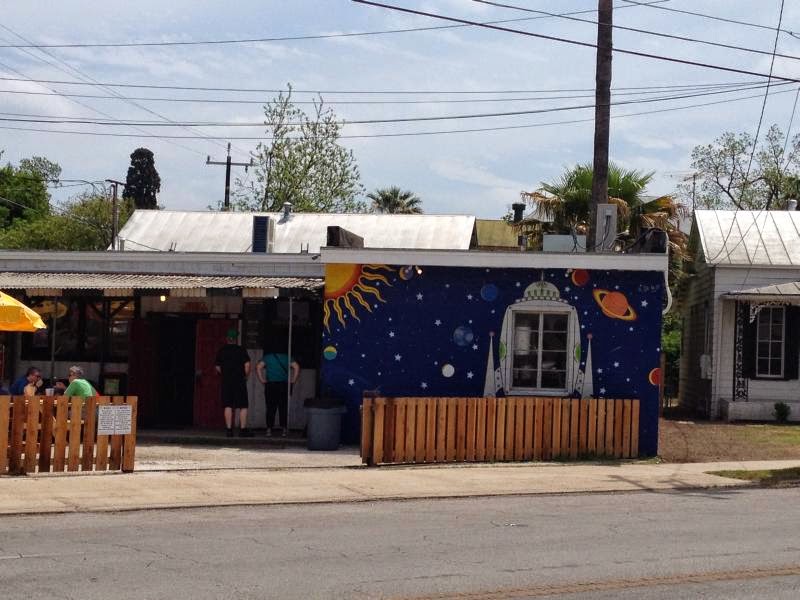 The first thing to know about this entire area is that, parking is very limited.  We found parking in a residential area down the street and couldn't help but wonder how irritating it might be for the people who live around there to constantly have cars up and down the street.  I guess that comes with living down town, but I can just imagine the commotion in the evenings.  Anyway, after a very short walk up Cedar Street, we walked met our friends inside the air conditioned seating area.  Outside, there are plenty of picnic tables and such, but the sun was out and it was already 90 degrees. 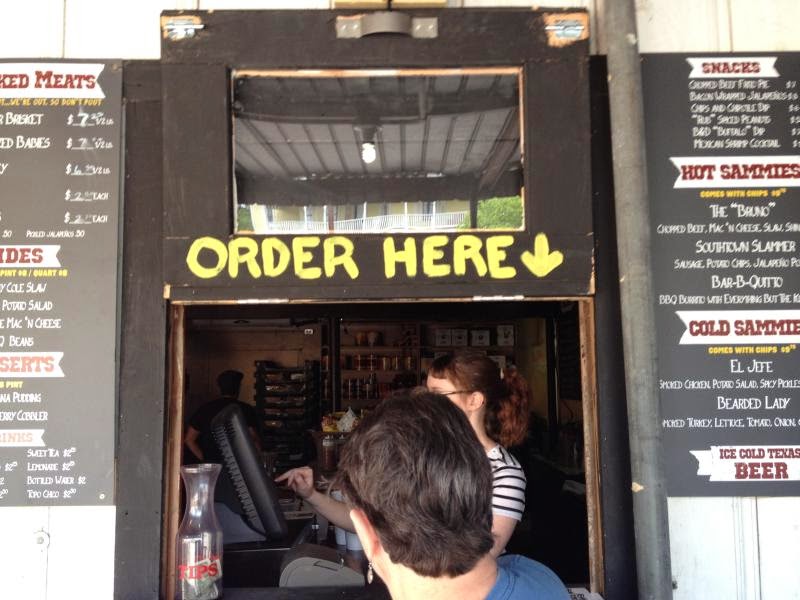 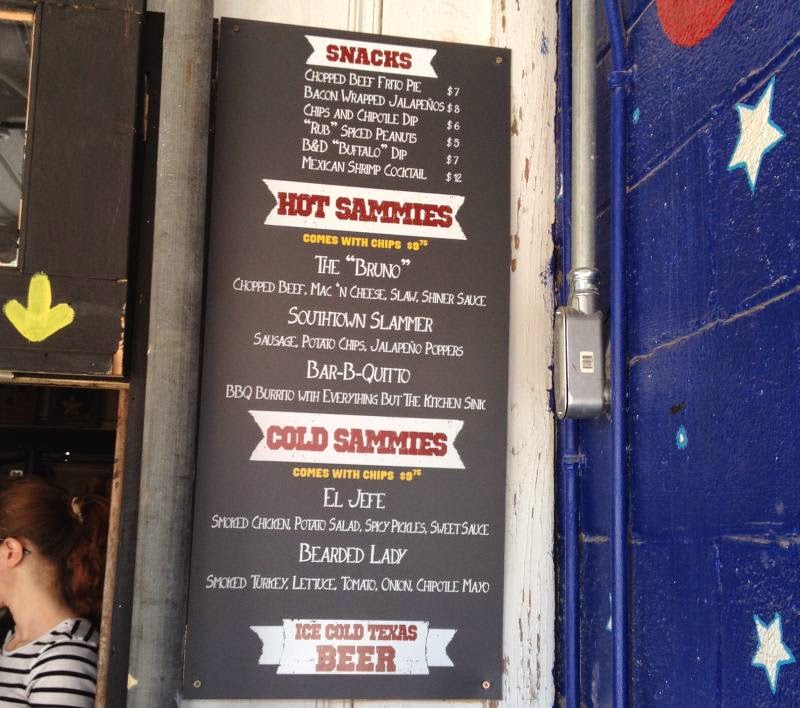 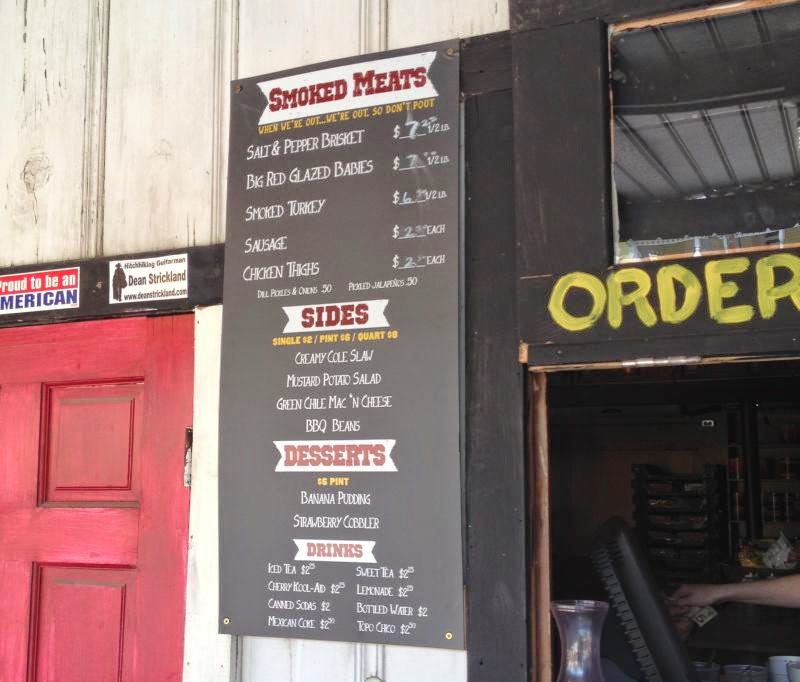 Behind the bar, there were a larger selection of beers on tap than most places, 6 or 8 anyway.  The menu is pretty simple and I like that.  You have your basic meats sold by the pound, some sides sold by the portion, you order at the window and in no time at all, the food is there.  Our wait from the time I ordered to the time I picked it up was easily less than 5 minutes. 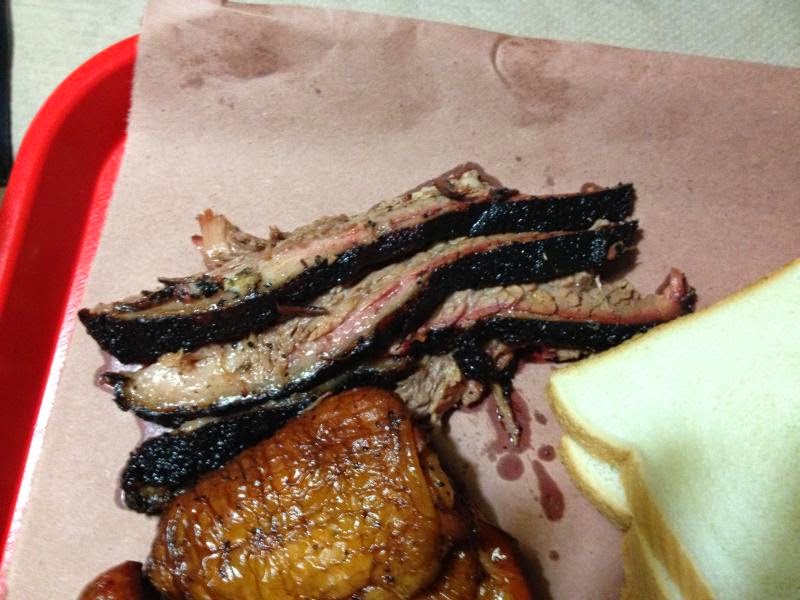 Here is the big surprise:  Except for my daughter, everyone at our table felt that the brisket at B&D was hands down superior to, and I can't believe I'm even writing this, Augie's Barbed Wire. Yes, in my opinion, we experienced the best brisket in San Antonio at B&D.  Not too smokey, the right amount of caramelization, and just melt in your mouth tender.  Order the brisket and you will be very pleased. 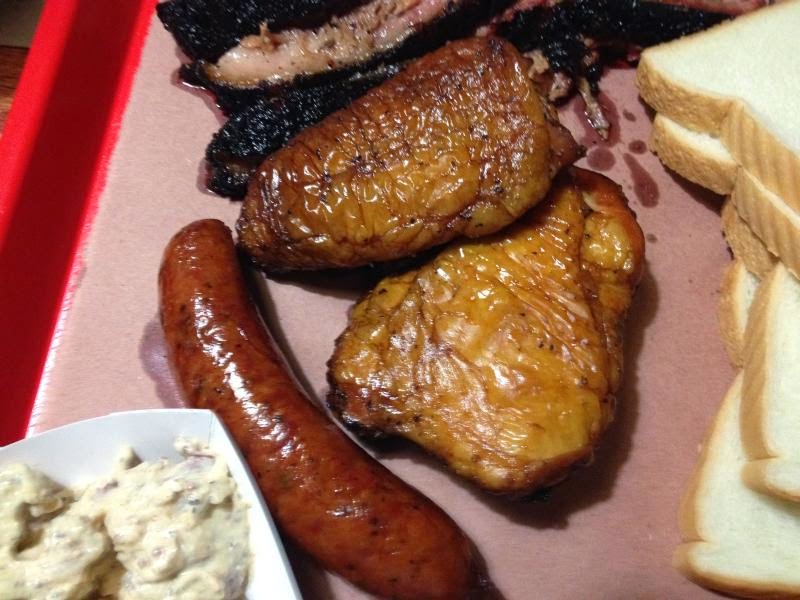 The chicken was interesting.  The skin had to be removed - it was simply too tough to even bite through, but the brilliance was, it locked in all the delicious, juicy flavor and everyone agreed it was outstanding.  I love chicken and this was wonderful.  I even enjoyed the sausage.  I usually skip the sausage links at most places but this was easy to cut and it had a great taste.

Do not under any circumstances put the sauce on any of your meats.  I know, some people say you should never use sauce anyway, but in this case, the real downer for our experience was the BBQ sauce.  It was simply awful.  Maybe that was on purpose - to force us to appreciate the delicious meats on their own.  If so, well done. 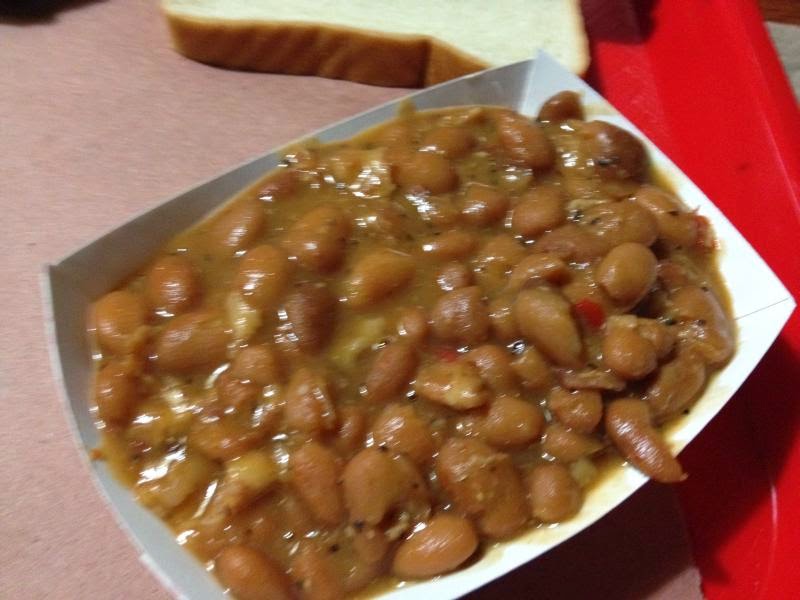 The beans were crappy too.  I'm sure they took pinto beans and just mixed in some of the ugly BBQ sauce.  Not a good choice. 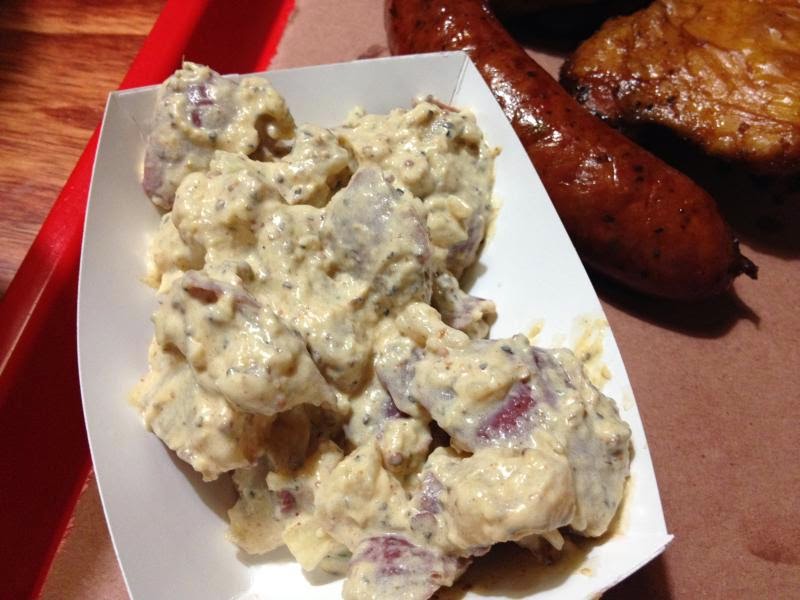 Most of us enjoyed the potato salad, and everyone thought the mac & cheese was excellent. 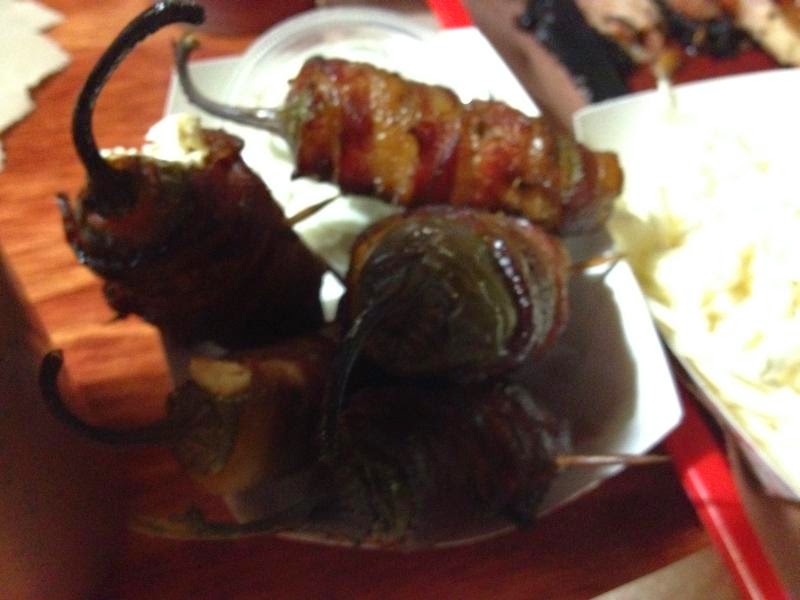 One real winner:  The Jalapeno poppers wrapped in bacon.  Just how I make them and wonderful. 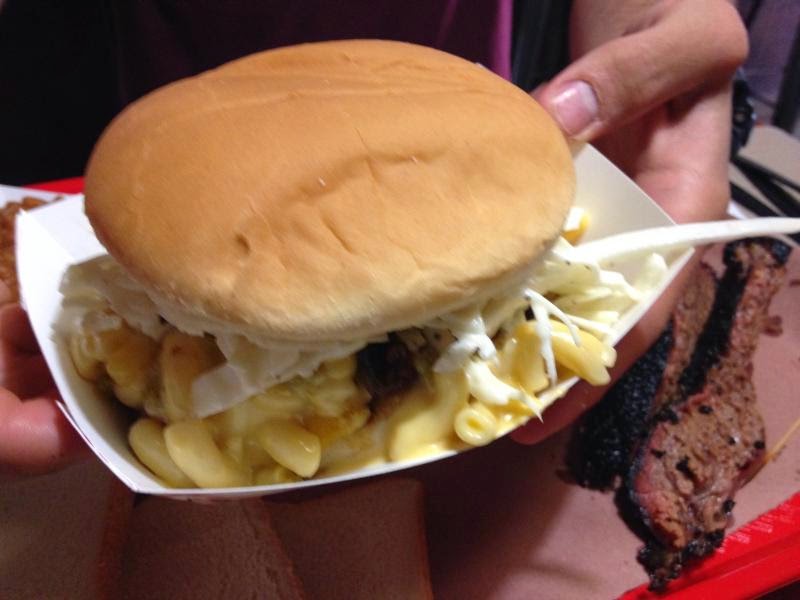 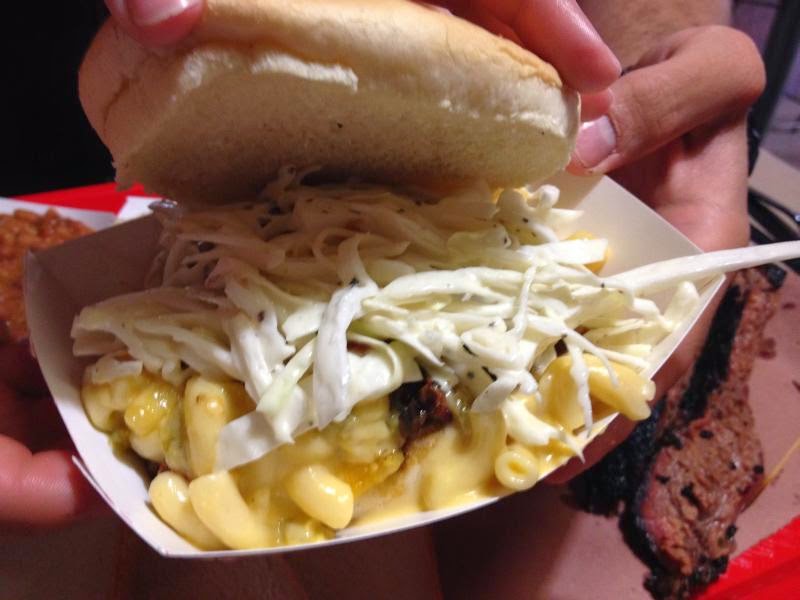 Not into meats laid out on a paper towel?  B&D has several Sammie options.  Tyler got The Bruno which is chopped brisket with mac & cheese and Cole slaw.  Wow!  It was fantastic.  The bread was nice and soft, that mixture of the meat with the slaw worked very nicely and I could see making this a nice messy lunch time meal.

B&D is my new favorite for BBQ downtown.  If you even think that you like BBQ, you need to go in and give it a shot.  The price was very reasonable (you'll pay the same at Rudy's or Grady's) and the atmosphere is great.  Skip the sauce and lubricate your lunch with a draft Shiner.  I promise, your in for a Tasty Treat!

Posted by Dave at 8:06 AM No comments: Links to this post

Okay - this isn't very timely at all given that Big League Weekend was last weekend. But, we make time where we can.

So you may recall that last year, San Antonio hosted a Major League Baseball game in the Alamodome - I wrote about it here.  My big complaint wasn't the short field or the lack of actual MLB players in the game, it was really the lack of an atmosphere.  We've been to the local San Antonio Missions farm league games (years ago) and they do it all up with music and little side attractions.  You'd think that they would just transfer all that stuff into the Alamodome and recreate that enjoyable atmosphere.  Nope.  Didn't last year and didn't do it again this time around.

The frustrating thing is, the UTSA football games at the Alamodome are so well done.  Even if the game is slow or our team is losing, the atmosphere created by all the music, the announcing and the little extras really keeps things moving.  At the most recent game, we found more entertainment in the conversations going on around us in the stands than we did in what was going on the field. 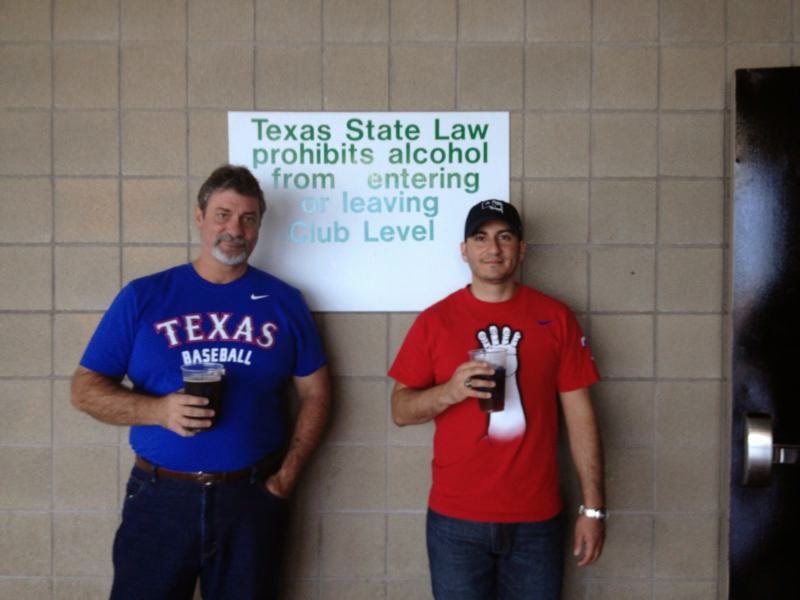 In the category of you learn something new every day...  For our UTSA football games, we sit down in the lower section because, well, we want to be close to the field.  For this game, we got seats on the club level which is where the expensive box seats are.  This shouldn't be important, but it is if you purchase a large Shiner Bock in the lower level before walking up to the Club level.  You cannot bring in any beer up to the Club level.  WTH?  So, my son and I had to stand in what we deemed the chug zone like all the other people unaware of this policy and gulp it all down before we could go to our seats.

It was frustrating to say the least, but we didn't get nearly as upset as this one guy who was really, really mad.  I jokingly said, Welcome to the Chug Zone and that just set him off on a torrent of expletives (between sips of beer, of course) about how stupid Texas is.  Are you kidding me?  They enforce bringing beer I purchased at this place into the next level?  This is Texas, it is illegal for people to (I'll leave this to your imagination) but they don't enforce that!   My son and I just looked at each other and busted out laughing.  The poor guy was beside himself and his wife just kept trying to calm him down (between sips of beer, of course). 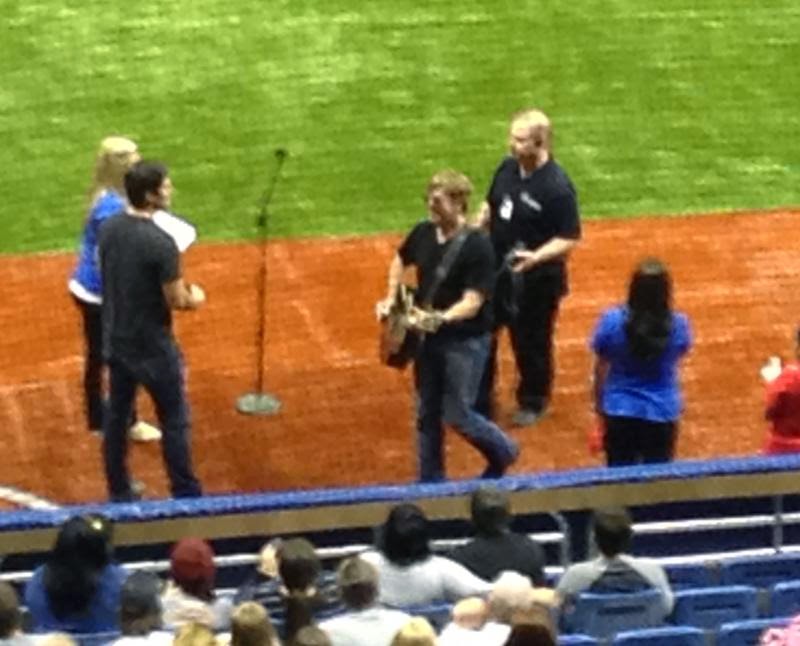 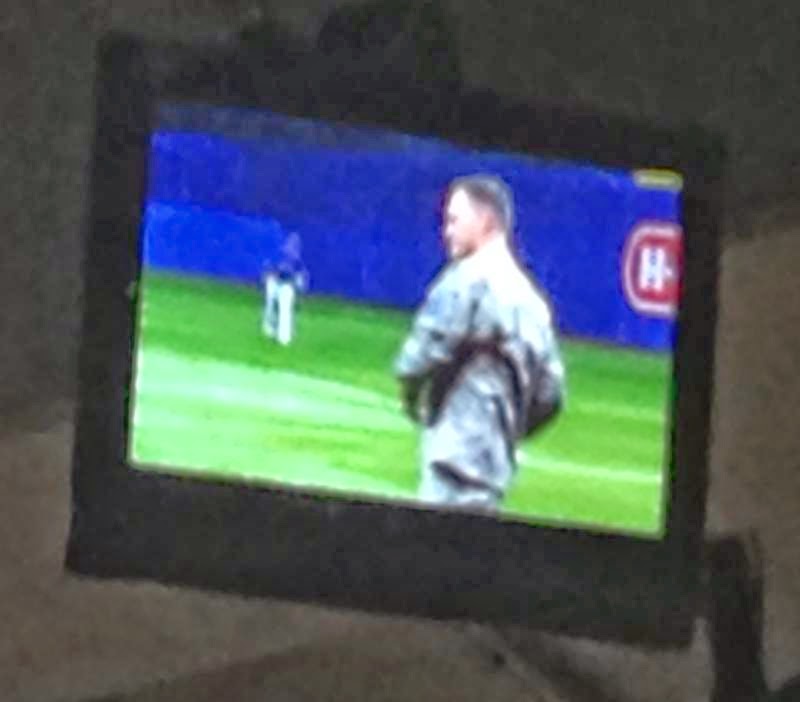 I will tell you that the opening of the game was well done.  First off, Texas country signer Jack Ingram came out and did the National Anthem with great style.  Then, the commander of Ft Sam Houston  threw out the first pitch.  He was very well received by fans, unlike last year when the mayor threw the first pitch and was booed!  Purro San Antonio. 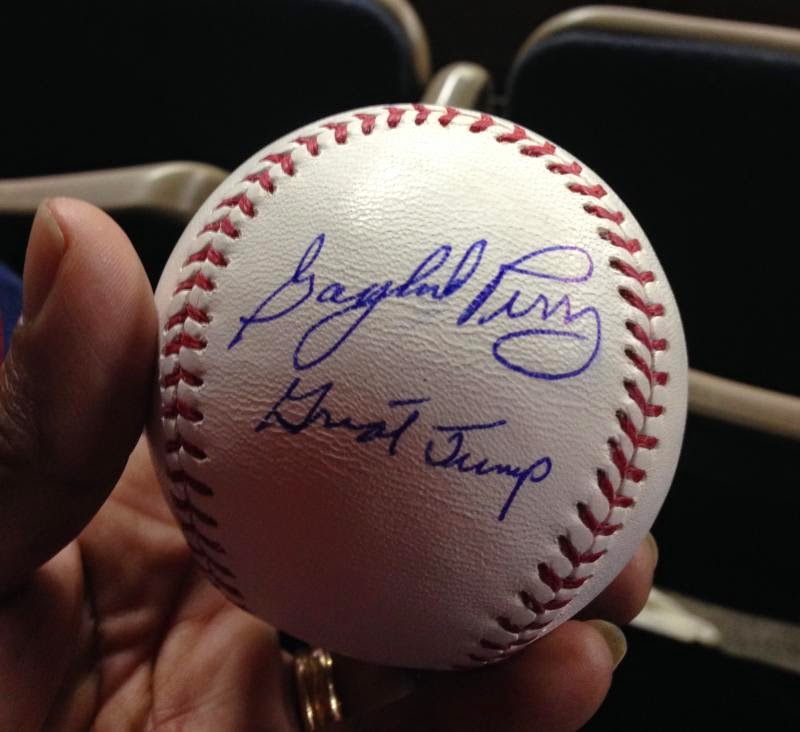 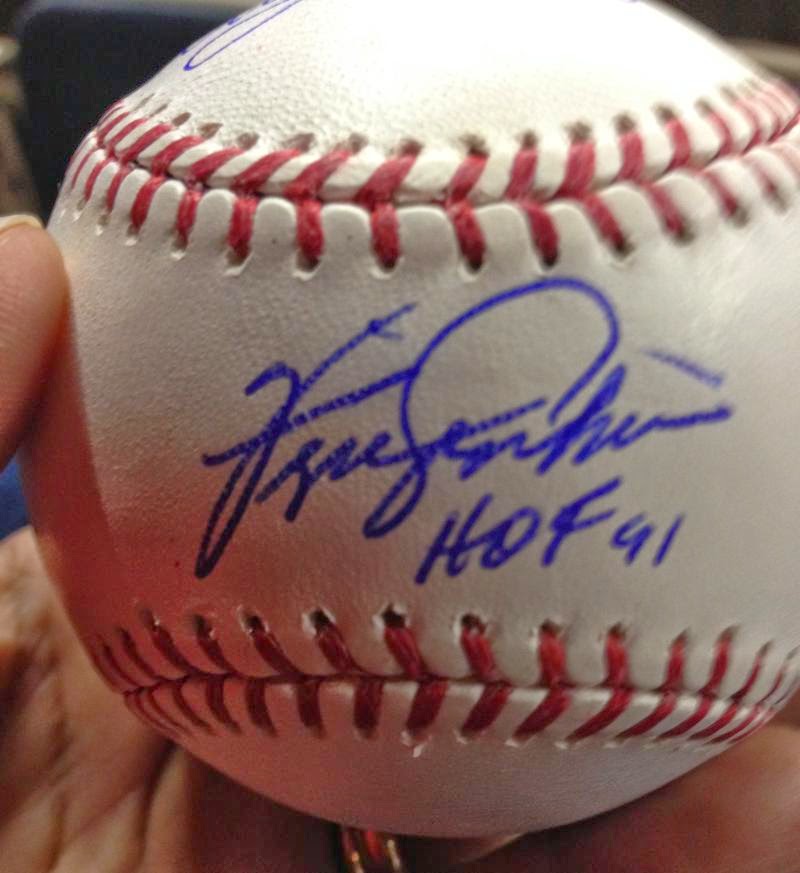 Before the first pitch though, members from Ft Sam's repeal team (including our son-in-law, Tyler) came down from the rafters to deliver the baseball and it was pretty cool.  Lots of cheers.  Afterwards, two MLB Hall of Famer's, Gaylord Perry and Ferguson Jenkins signed baseballs for the guys. 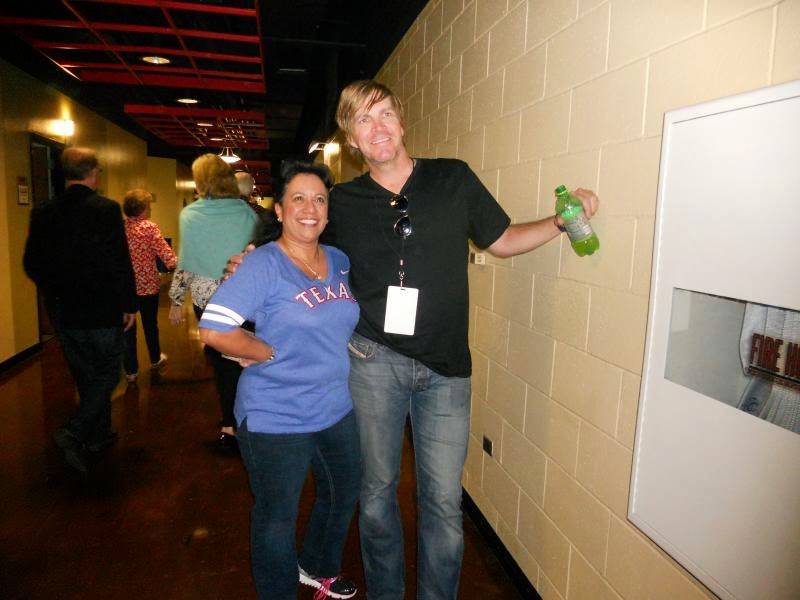 The game itself was really not that exciting - see comments about the lack of anything to distract us from the boring game.  But there were lots of home runs and at least one grand slam.  Eva found a little excitement.  When she went out to use the restroom, she found Jack Ingram out in the hall way and he gladly stopped to chat and take a picture with her. 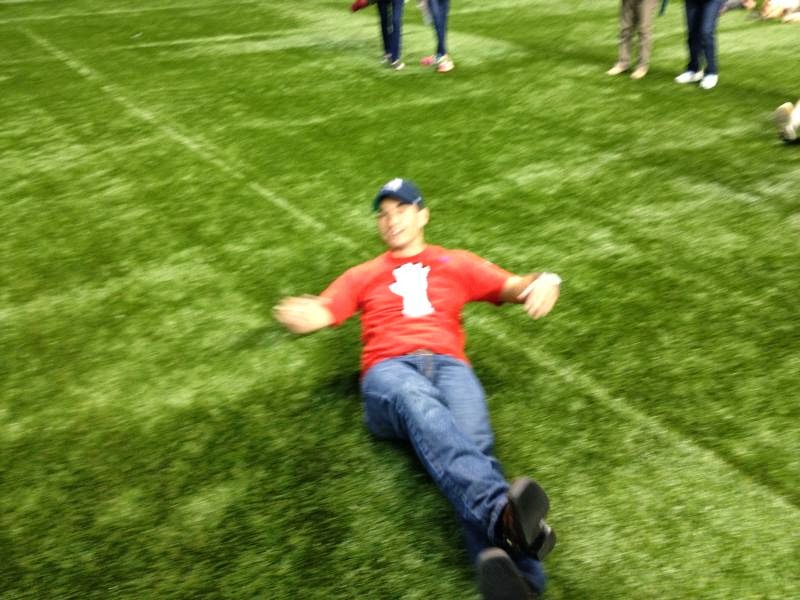 After the game, we went down on the field and watched the concert.  The cool think was, feeling the really nice Astroturf.  This isn't the same stuff they use during the football games, and it actually felt nice and soft.  Like, if you took a tumble, it wouldn't be like landing on concrete. 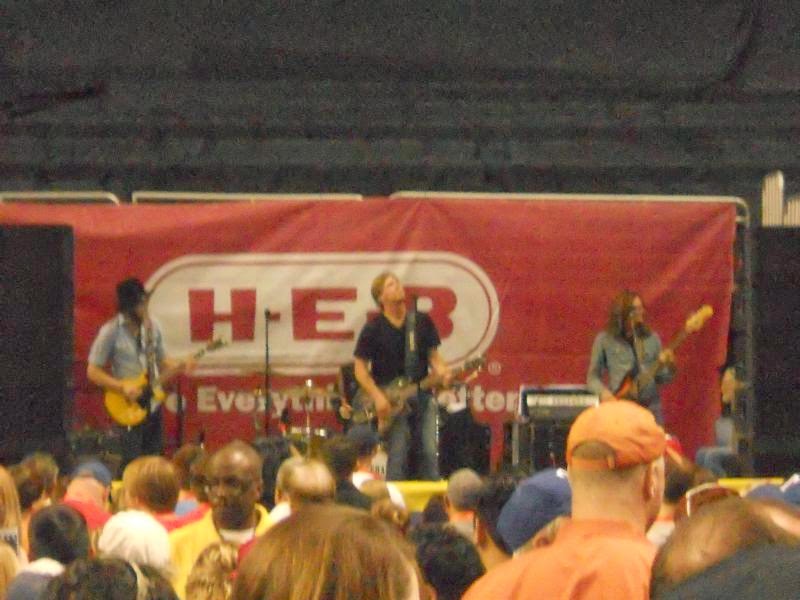 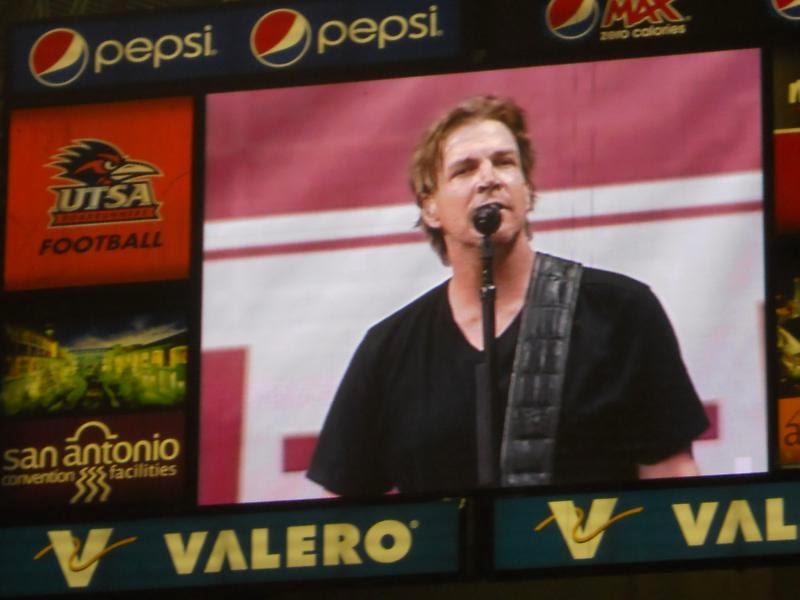 The concert lasted about 30 minutes or so and of the crowd who stayed, Mr. Ingram really got people energized.  Where was all this during the game? 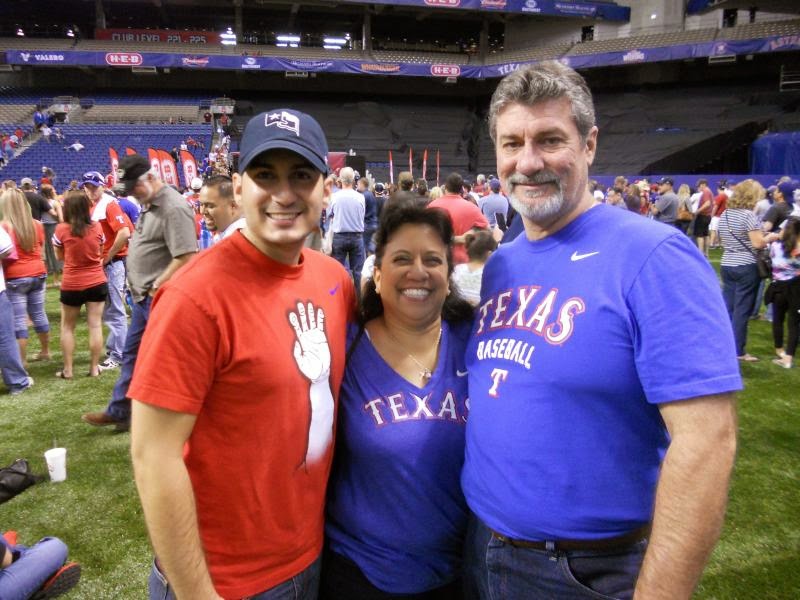 Anyway, I think it is great that HEB and other sponsors brought this event to the Alamodome.  I have several friends who attended and everybody agreed that the game was boring but with the proper amount of beer and hot dogs and peanuts, it was fun.  I'm just imploring whoever decide to do this next year, please learn something from the farm leagues.

Posted by Dave at 11:18 AM No comments: Links to this post