This certainly isn't timely - that's for sure.  Regardless, last weekend, my son and I took a road trip up to the friendly town of Denton so we could catch a really good football game in some really cold (cold to us) weather. 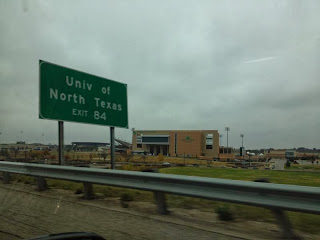 We left Natalia at about 5AM on Saturday and aside from a little bit of rain along the way, traffic was smooth and by about to 1030AM we were arriving in the visitors area of Apogee Stadium.  The stadium is at the intersection of I-35W and I-35E just north of Ft Worth. 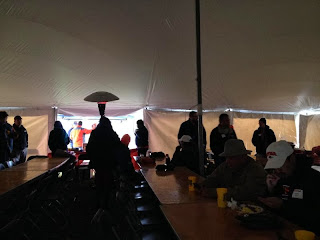 My son bought us some tickets to the Alumni associate BBQ which happened to be set-up in a tent with two of those big propane heaters.  That was helpful, but still, it was chilly.  Catering by Dickie's.  Not bad at all, but it was funny that our potato salad was nearly frozen, and not by design. 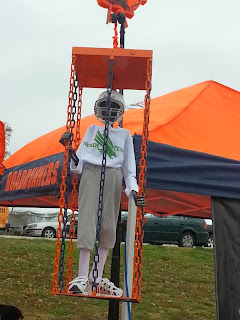 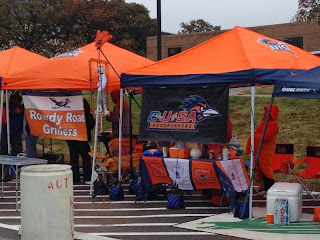 After eating, we headed back out to the parking lot to join forces with the crowd of UTSA tailgaters who were prepping themselves for the game.  I don't think a lot of people grilled, but there was plenty of revelry and good cheer.   A family who sits in the row in front of us at the AlamoDome was there and they had invited us to hang out with them.  Nice folks.

As a side note, we walked across the street to the Exxon station to grab some beer so we wouldn't feel like freeloaders.  I grabbed a 12-pack of Dos XX's (XX, technically) and when the guy rang it up, it was $19.67.  I ended up grabbing some Miller Lite.  When we walked back to the tailgaters, I told my son that I felt like a cheapskate since a beer at the AlamoDome is $7.50 and here I was complaining about $20 for a 12-pack.  And considering we only drank a few of those beers, I probably did pay $7.50 each.  But you just know that any other day of the week, they are charging at least $5 less. 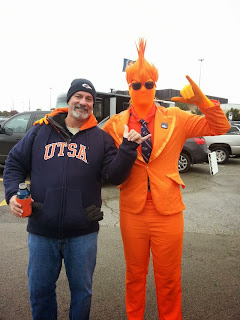 Back at the party we saw some of the usual people.  This is me with the orange guy. 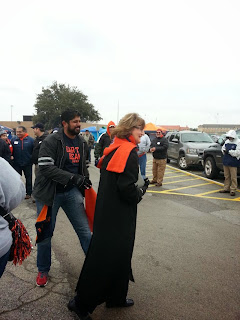 Also, when the UTSA Athletic Director, Lynn Hickey came out to say howdy to the UTSA contingent, the crowd went wild.  This guy posing with her, Samir I think his name is, is always doing the UTSA chant at the home games.  He brought a big megaphone and even got Ms. Hickey to yell through it.  Good times. 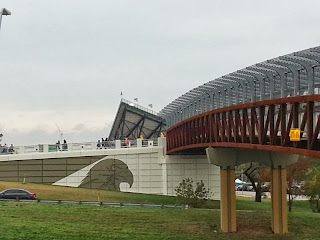 As game time approached, we headed across the nice walkway built over I-35E. 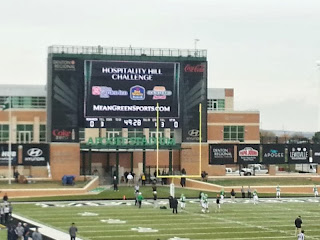 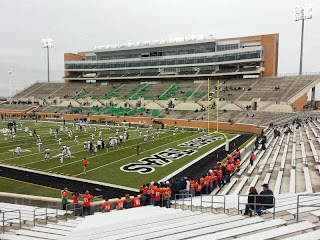 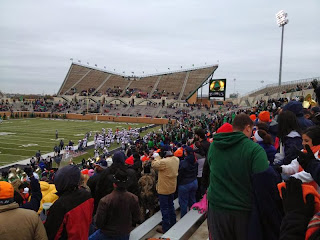 The new Apogee stadium is a beautiful facility, but as my son pointed out, it would be a great high school stadium.  Ouch!  It's true. 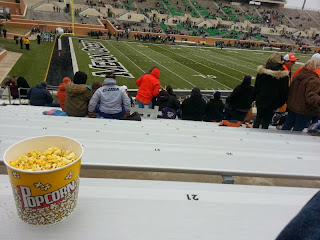 I will say that the place is very nice and the bathrooms are first class.  Two problems though: No beer and no Doc Popcorn. 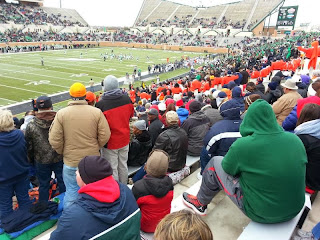 I must tell you that going in, we just assumed that we would lose and I think everyone hoped it would just be a close game.  UNT had been undefeated at home.  In the end, it was an incredibly exciting game and UTSA led the entire way.  Such a good time, in spite of the cold, cold temps.

When it was over, I appreciated the friendly demeanor of the losing home team.  One guy stopped me and said we played a great game.  I think I caught him off guard when I high-fived him, so he cheerfully responded that they couldn't wait for next year to kick our ass! 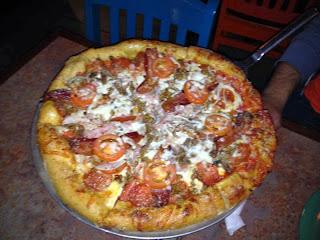 After the game, we checked into our hotel in Denton, then headed out to a place called the Mellow Mushroom.  There was quite a wait (about 3o minutes or so) but the pizza was good.  Nothing to write a blog about. 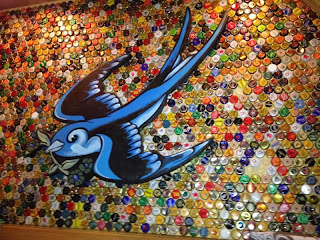 What I did like was their use of bottle caps to decorate. 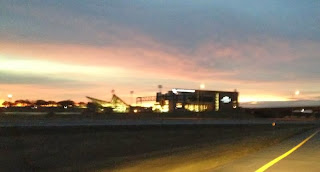 We got an early start back to San Antonio, and and after a short stop in the town of West for kolaches and to say howdy to our friend JackieSue (You know her as YellowDog Granny), we were back home in time for a big lunch of carne guisada that Eva had made for us.
Posted by Dave at 6:51 PM