And Another Furlough...So Let's Review the Game

Yes, the idea of getting through sequestration without a huge financial backlash seemed too good to be true.  And now a government shutdown.  I have to go into work this morning to put on my "out of office" message on my e-mail, mark out the time card with annotations that I've been furloughed, then come home and get ready for Eva's forthcoming to-do list.  What can ya do?

In the mean time, we had a great time on Saturday seeing the UTSA Roadrunners get spanked by the University of Houston Cougars.  It was a great game with, in my opinion, UTSA really leading the way up until the end of the 3rd quarter when the 'runners just fell apart. 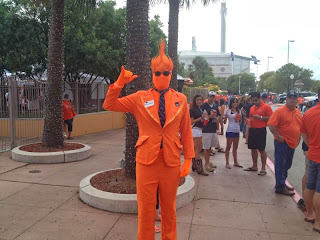 We went early so we could watch the parade as it was.  The team and the band and all the cheerleaders and dance squads take a nice stroll through Sunset Station on the way to the Alamodome so the fans can show appreciation.  This was a new character I had not seen before.  Orange Guy? 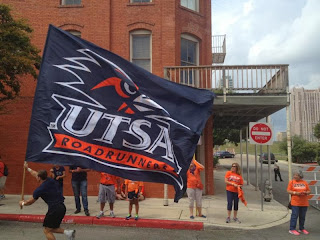 Those are some big flags.  They start off with the flags back and forth up and down the street, then the parade gets started. 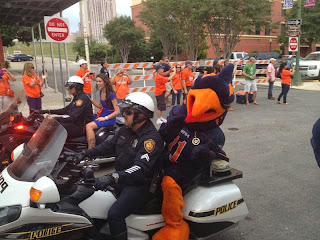 First, a police escort with Rowdy and I am assuming some sort of ambassador student. 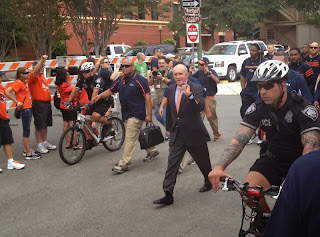 And then, incredible coach, Larry Coker and the staff. 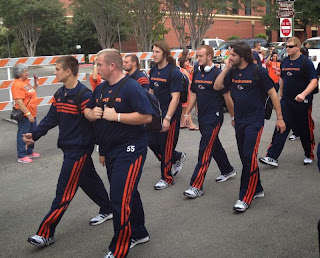 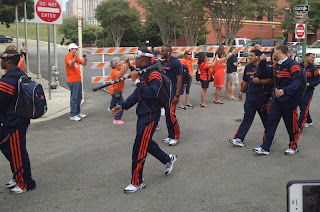 Followed by the players in warm-up uniforms, most with iPods jammin' to their tunes. Or a big sledge hammer. 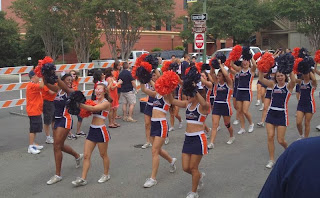 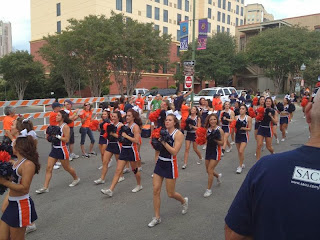 Can't have football without cheerleaders... 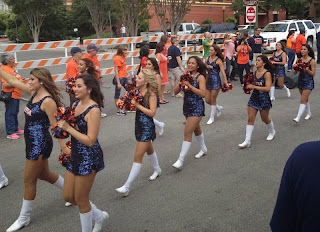 Or the dance team.  Actually, during half-time, the dance team had a really nice little 60's style number.  The thing was, it only worked because they all have long hair. 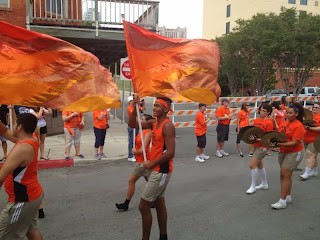 And then the flag team.  Lots of flags to give excitement to the band during half-time. 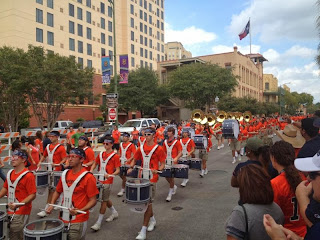 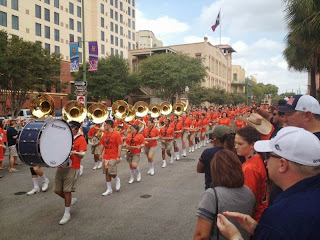 And finally, the band comes marching down the street through Sunset Station. 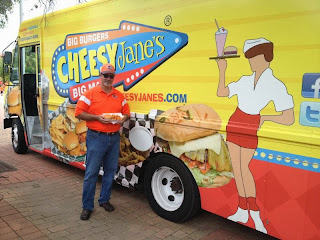 After the parade, we decided to take advantage of the food trucks parked along the street, and I had an awesome burger and tots from Cheesy Jane's.  By the way, these food trucks are quite the ticket as far as I'm concerned.  Eva and Roxanne got food from Jersey Mike's and from Augie's BBQ while us boys all had Cheesy Jane's.  Something from everyone. 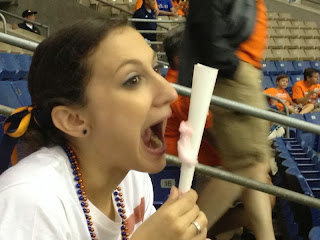 Oh, and there was dessert too.  Yes, Roxanne finished an entire cotton candy, by herself with no help from anyone! 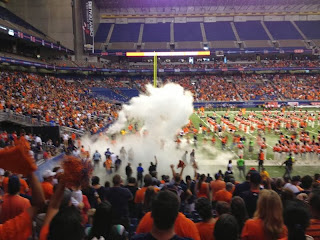 I love the openings to the games.  Everything about the music and the fog just adds to the excitement. 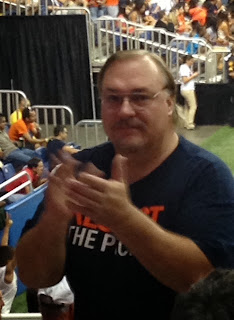 But what really got us was that Milton from Office Space turns out to be a huge Roadrunner fan.  I love that guy.

Okay, remeber I told about the situation with the drunk guy who stood for most of the first half during the first home game, causing distress for the fans behind him?  Well, he brought his sister this time.  Oh. My. God. (As the kids on the Internet say).  I did not take any pictures because, no matter how innocent it is, there is nothing good that comes from a guy my age taking pictures of a drunk college girl unless she happens to be my daughter and I'm just taking pictures for the family photo album.  I'm sure you can understand.

Anyway, we figured out pretty early that this chick was hammered.  When she stumbled out to get a beer, she came back and bypassed our row by about 10 rows.  I'm almost certain the only way she found her way back is that she made eye contact with my son and me as we were not so discreetly laughing at her.   This is in the first quarter.  Later, we looked back and she made the obvious moves of a person about to blow chunks all over the person in front of her.  She was helped by family members who took her out of the stands to assist her.  With another tray of nachos and another beer to wash it down.  Good times.  Can't wait to see what happens at the next game.

One other quick note.  Eva made fun of me for my flirtatious behavior with the nice lady seated next to me during the last game.  This time, my son took the seat where I was so I wouldn't be tempted to take happy snaps with strange ladies.  Turns out, an 85 year old grandmother was enjoying her first live football game, and she just LOVED sitting next to my son.  They got along famously.  It always helps to have a nice young man explain the finer points of the game to you.

And that's it - off to start my last day of work until the government can get its collective act together.
Posted by Dave at 6:31 AM

Seems like you all had a great time...in spite of the drunk college girl.