On Monday, Roxanne starts back to school so she decided that we all needed to get away for the day and take a little drive to Garner State Park for a picnic.  If you have never been, Garner is located about an hour and a half west of San Antonio, north of the town of Uvalde.  Eva's family went to GSP her entire childhood, and we took our kids several times a year as they were growing up.  I suspect the tradition will continue with their kids too.  We don't camp anymore (I prefer an air conditioned hotel over a tent, thanks), but we do like to go for the day. 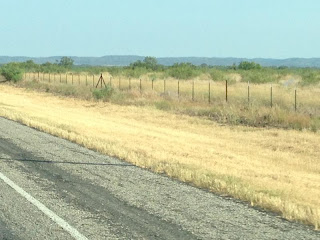 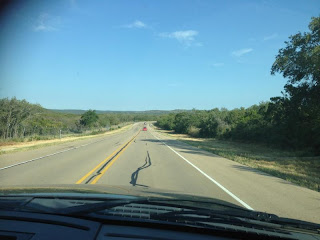 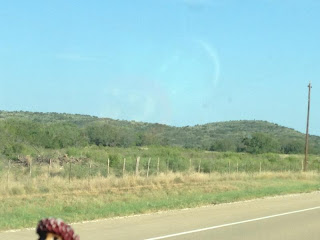 The drive between Sabinal and Concan is a windy stretch of road through farm and ranch land.  If you can't get in a plane and see how big and wide open Texas is, this drive will remind you that there is a whole lot of wide open space out here.  The last part of the drive into Concan is where the road begins to curve and the hills start to grow.  In the olden days, radio stations would fade and when we got our first cell phone (a brick like device) service would be lost).  Now, clear signals and 4 bars have been introduce to the middle of nowhere.

One of the things that I have noticed over the last few years is the the growth around the small town of Concan.  It used to be Neal's Lodge was the only place and maybe a few small stores sprinkled right at the intersection of Hwy 127 (from Sabinal) and Hwy 83 (from Uvalde).  Now, as you approach Concan, there are a dozen little cabins and lodges and signs for golf courses that have sprung up. I guess this is what you'd expect as the area has grown more popular. 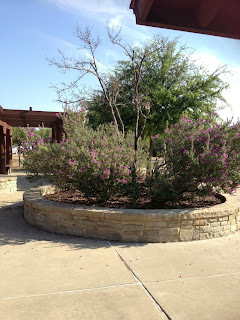 And Garner itself has spruced up quite a bit.  serious flash floods over the years have changed the look of the park as we have known it years ago.  Some bathrooms and a concession stand were swept away in a flood some time ago.  Across the Frio river, you can see RV's and cabins have been built along the edge providing these folks with the access that park goers pay $7.00 a day for. 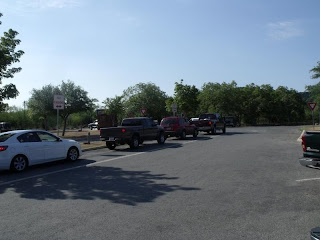 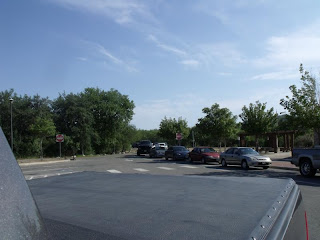 We didn't get there until about 9:30 and there was already a line of cars backed up to get in.  I will say that one of the things that has not changed in the 28 years I have been going to GSP is the bureaucratic process of paying fees.  Years ago, people would have to stand outside of the park headquarters and wait to be called in to pay for a campsite.  I always felt like there should be a more efficient way.  With the introduction of computers, you'd have thought the process would improve.  Well, it has to an extent.  There is now an air conditioned waiting room and you take a number to wait.  But once inside, they seem to need so much information.  If I was a conspiracy theorist, I'd be concerned that the state of Texas knows everything about me and my pattern of visiting state parks and the vehicle I drive.  If you think that you can just anonymously go camping, guess again.  Of course, if you don't have anything to hide...you don't see the black helicopters hovering overhead.

We made our drive into the park proper and slowly drove through the campsites and shelters, pointing out spots we have stayed at in the past.  We noticed new signs pointing the way to various trails and caves and such.  Garner used to have the standard brown wooden plank with yellow paint to identify a certain trail.  Now, thanks to The Friends of Garner, there are colorful descriptive signs with historical information.

We drove well beyond where we used to set-up as the early birds had taken all the parking, all the fixed picnic tables and covered most the rocky river edge.  Instead, we continued down the road getting closer to the park's famous pavilion where you can buy T-shirts and souvenirs, where Saturday night, the juke box blasts country favorites and campers dance the night away on the huge patio, and where on Sunday's an all denomination church service is held. 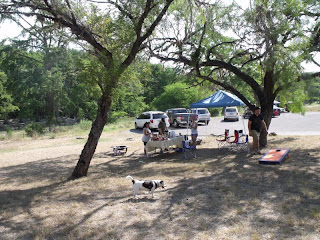 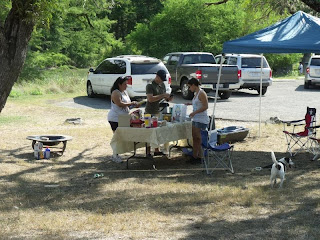 We located a tree and some open space just off the last parking lot near the river, and set up our little day camp.  Of course, corn hole boards, a pop-up shelter and lots of ice chests are required.  Roxanne brought Panda who enjoyed herself quite a bit.   The boys spent most the afternoon in their corn hole tournament, and thankfully, the occasional clouds and a slight breeze made the heat less of a factor.

As we settled in, there was a visible lifting of a weight off of Eva's shoulders.  So many wonderful childhood, really a lifetime of memories from Garner, or has her family has always called it, Gardner.  When they were kids, her family would take a week's worth of groceries, load up the station wagon and perhaps throw in a few neighbor kids and that was the family vacation.  When there is something about a place that can send all your worries away, you ought to spend more time there.

I spent the majority of my time sitting on my ass in the comfort of a lawn chair reading a book (on my iPhone), and occasionally getting up to take pictures of the river and the scenic views.  I did have occasion to visit the pavilion where, Eva had informed me was a vacant restroom.  All I can say is, finding a private stall in a crowded place is sort of like winning the lottery. 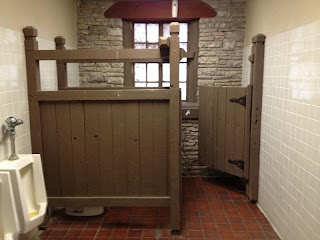 I'll never forget my first reaction to GSP back when we were first married.  My big complaint about Texas rest stops and state parks was the lack of privacy in the mens' rooms.  Seriously, does it cost that much more to build a full wall instead of a half wall.  I have no interest in holding a face to face conversation with a man sitting on the crapper 18 inches from me.  Thankfully, over the years and the floods, new restrooms have come and a bit of modesty has prevailed. 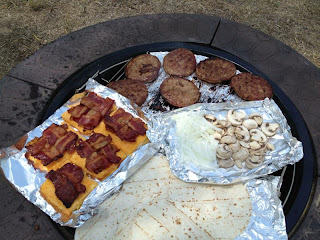 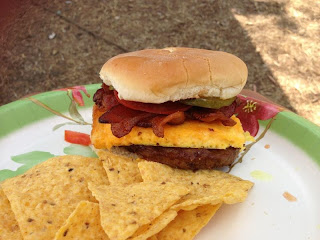 Roxanne and Tyler brought a small fire pit that we used as a cook grill.  By lunch time, everyone was starving and I must say, our burgers turned into a near-gourmet affair.  My kids have always enjoyed my famous Jalapeno pie, and Roxanne created thin versions of these little jewels so we could use them as cheese squares on the burgers.  Add to that some bacon, mushrooms, onions, pickles, avocado and now you're talkin'!

Panda did enjoy her little swimming episode in the Frio, but when we brought her back to the campsite, she promptly chose to dry herself by rolling around in the dirt. 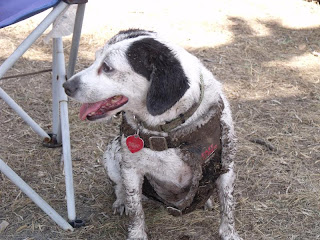 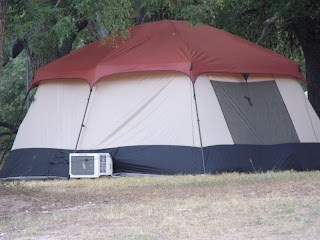 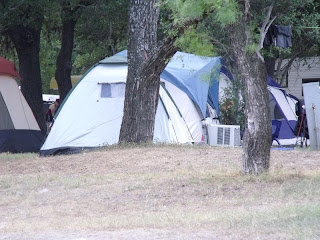 There was something I spotted in a campsite across the street from where we were set-up.  I have concluded that, in Texas, this is the only way to tent camp in the summer. Yes, people have placed window units on a small platform and air conditioned their tents.  Brilliant! 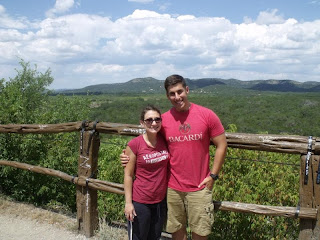 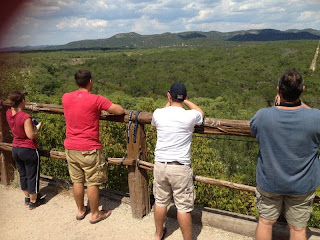 As we left, we stopped by probably one of the most well known spots in the park.  For decades, people have stood at this scenic lookout to have photos snapped of themselves for the memories of the good time they had.  And of course, we would have memories from this day, and I'm sure, more with our grandchildren in the years to come.
Posted by Dave at 9:53 AM

Fantastic, thank for the report. Now, to bug you again..when you guys gonna visit the #1 burger spot in Texas (according to Texas Country Reporter and Texas Monthly)..they are located just up the road from San Antonio! Here's the website url:
http://www.yelp.com/biz/alamo-springs-cafe-fredericksburg

Thanks for sharing in all of the fun. Based on the photos alone it looked like a very good time.