My sister Susan, who lives up in Minnesota where it is entirely too cold most of the time, but does have quite a bit of color and beauty compared to the desert we live in, sent me some pictures of Adirondack chairs made by Amish folks using all recycled materials. 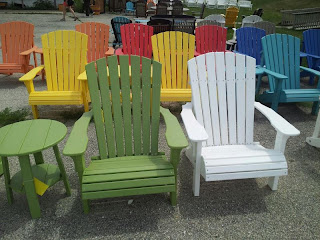 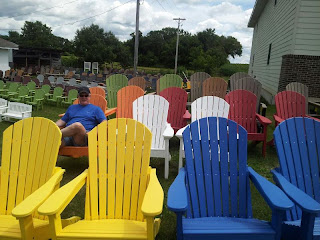 I really like the colors, and unlike my chairs where each one is definitely a unique creation, (that's my way of saying I don't always cut straight), these are all so uniform and consistent. There must be a machine involved!  That's my brother-in-law, Paul, sitting in complete comfort. 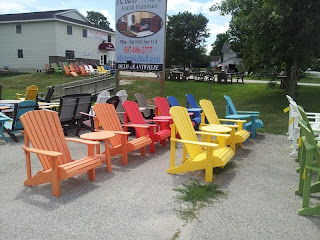 I have to say, I don't really like the design with the back brace running from the foot to the top of the chair, but something tells me those were specially made for some of the heftier Minnesotans, who could surely give San Antonio'ans a run for their money in the husky department.

Of course, I had to ask the price and my sister gave me a general $200 cost.  But upon looking at the web page, I can see prices ranging from $85 for a foot rest to upwards of $350 for a single chair.  But these things will last a lifetime (or more). 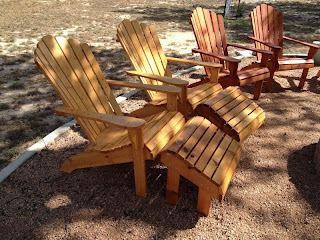 So this is the final product on my matching foot rests for the two Cedar colored chairs I made.  I spite of the occasional minor flaw, my not so consistent staining and an undetermined life-span on these things, I have to say there is a lot of pleasure in resting in these wooden creations, made by me.  There is value in that.

Speaking of things built out here... that is a segue playing off the name of the blog, Living Out Here, get it? 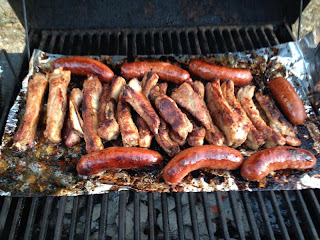 The kids were all over yesterday and we feasted on some awesome ribs, sausage, cornbread, deviled eggs, potato salad and some multilayer dip my daughter whipped up.

Here's the trick on the ribs - try it if you care to.  Get some St Louis style pork ribs (or baby backs) and give them a good coating with Goya's Adobo seasoning and some of the Grill Mate's Montreal Chicken seasoning.  Then splatter on some soy sauce.  Whip out some lemons and limes, and generously squeeze them on repeatedly during the cooking process.  Seriously, you'll never want to use barbecue sauce again. 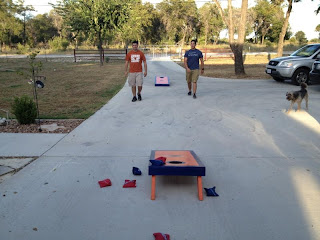 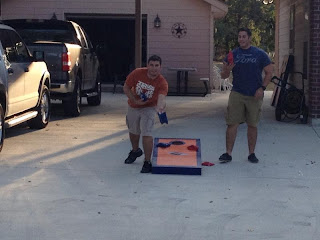 After that, the Cornhole competition began.  Taz and Tyler played several games until I was ready to take on the winner.  My knees are killing me this morning after playing multiple games.  I doubt there is any real aerobic value to the game, but it sure is fun.  For the record, I think Tyler is our over all champ.  Until next time!
Posted by Dave at 10:05 AM

Those chairs look fantastic. I'm trying to imagine the pride I would have if I sat in a chair I had built myself. I'm not very handy. Will definitely be trying your rib recipe!

"unlike my chairs where each one is definitely a unique creation, (that's my way of saying I don't always cut straight)"

Lol, you had me chuckling there! I agree with Emily Cruz on the pride it would give me to be able to build not a chair but ANYTHING...I too am not very handy :(