Number 4 and Other Items...

I started off the big 4 day weekend by mowing and weedeating so we could have the kids and cousins over for some fireworks and burgers.  Once I had gotten all that taken care of, I spent the afternoon sanding and preparing Adirondack Chair Number 4. 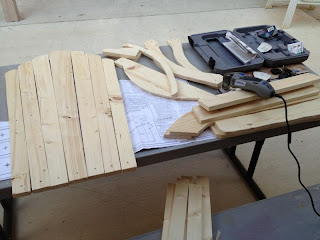 I got everything ready to go so on Friday morning I could just grab some glue and some screws and get things going.

Friday morning we woke up and I immediately noticed that something was amiss with our A/C unit.  I could hear the thing running all night but the house never got below about 76 or 77.  I know, that probably seems like a comfortable temp (I have a friend who keeps his place at about 80), but overnight, we are more like a 73 degree family.  I can tell you, we would have never survived Texas before air conditioning.  Anyway, we called the A/C folks we like and they had someone on the way. 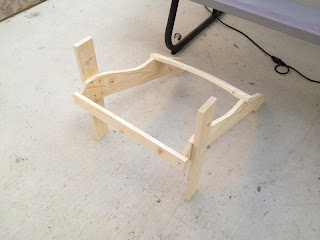 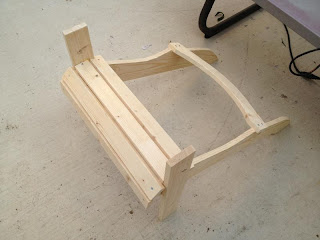 In the mean time, I commended to assemble Number 4. One of the problems I've noticed is that the pattern I use requires you to create a left and right side using the same pattern.  You have to be smart enough to realize that you have two of each piece, and you simply reverse one of them in order to assemble it properly.  On the first one, I was obviously still figuring things out, so I slowly assembled it and had no problem.  On 2, 3 and 4, I have made the mistake of assembling two duplicate legs, or in other words, two left legs.  And each time, I have to take it apart, call myself a dumbass, and press on.  This isn't rocket science, but it helps if you at least have some common sense. 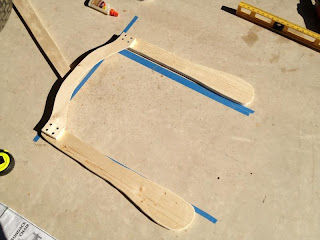 Actually, the hardest part of the assembly is putting on the arms with the piece that supports the upper part of the back slats.  Again, part of the problem is the fact that you have two arms that are duplicates instead of mirrored, thus, the little guidelines that you draw on to help line things up work for one, but not the other.  I have taken to measuring things out on the floor, using tape to line things up and making it easier.  If I were smart, I'd build a frame that I could just sit the pieces into, then glue and screw. But I keep telling myself that I only intend to build a few of these, so why worry about it? 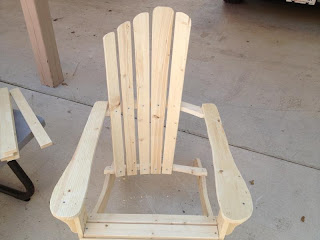 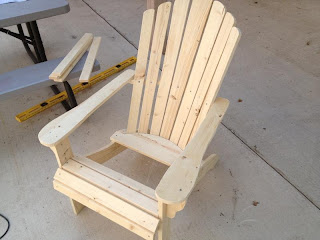 Just looking at the picture, I'm about 90 percent sure the center slat is not exactly centered.  But as Eva says, the little imperfections add to the personality of these chairs.  I have to agree.  I realize that with the right equipment, a manufacturer could pump out perfect copies.  I'll pass.  So far, everyone who has sat in one of these chairs has raved about how comfortable they are, and nobody has said, "Hey, I think this center slat is about an 1/4 inch off." 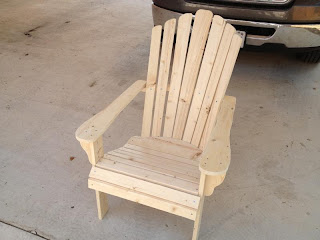 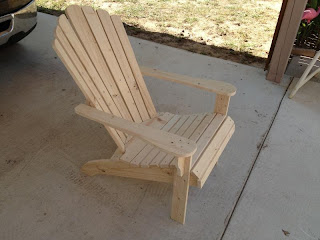 This is the last picture I took before the A/C guy chatted with me about my bill for a new capacitor and the fact that he wanted to come back and look for a possible leak in the system.  As Eva squared up the bill with the assistant (she writes the checks in our family), the company owner and I talked about the chairs and how good it felt to build it yourself.

I have found that the only unenjoyable part of making these chairs is staining.  I realize that I just don't like it, especially bending over and such.  I also found that another one of the problems with using the same pattern for both sides of the chair is that the wood is flipped and you don't get a consistent surface when you stain.  I know there is an answer to this, but I'm just not that worried about it. 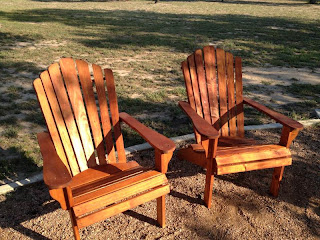 This is a picture of Chairs number 1 and 2.  Notice they are a bit darker. 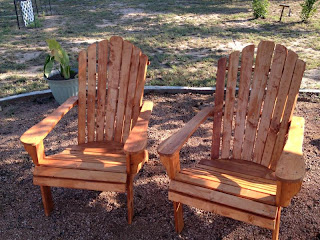 These are Chairs 3 and 4.  Much lighter.  The reason is, I only did one coat of stain on 3 and 4.  Today, I'll go out and do a second coat just to make them all match.  I only did a single coat on the later chairs because I have been toying with this idea of painting them a solid color.  But someone told me, "Dude, it's wood.  You have to stain it.  You can't cover that with paint!"  and I have to admit, it's true.  So, another coat this morning then some sealer later. 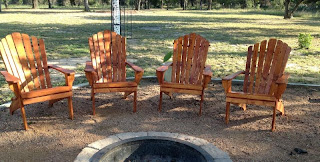 UPDATE:  I put on the second coat of stain and am reasonably happy but based upon comments and e-mails, I'll give the pre-stain sealer a try on the next set.

On the 4th we went to La Pasidita for lunch and on the way we saw this parked in front of the tire shop. 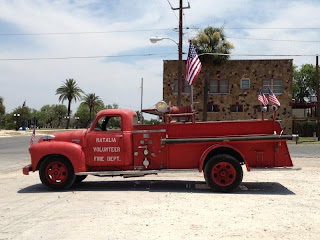 You just gotta love this old truck. Later, we had made a trip into San Antonio and on our way home, about the time we hit Lytle, we could see a huge plume of black smoke coming up, and it looked like it could be from our neighborhood.  As we got closer, we could see that, yea, that really could be coming from our neighborhood.  And then we saw a Natalia VFD (a newer version, not the one pictured) headed toward the fire.  Oh, that ugly feeling.  Of course, I was asking Eva if she had left her hair curlers plugged in.  In the end, once we got close enough to see, it was slightly south and west of our subdivision, and when we pulled into the driveway, all was well.

Remember that little play house that Eva bought at the yard sale a few weeks ago?  I knew this thing would cost me more than just the $10 she spent on it.  Our granddaughter really likes it, so it had to be added to our little playground area. 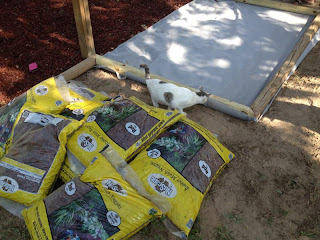 We just added in a small section big enough for the house in order to save on the cost of the rubber mulch.  Little Kitty inspects. 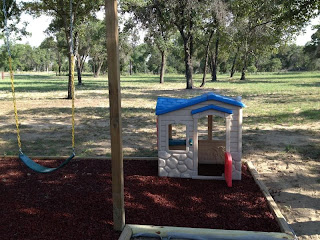 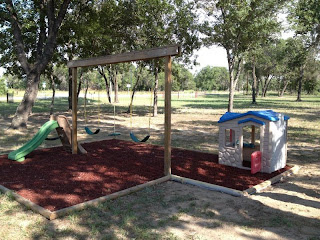 Here is the final product. For Isabella, a fun place to play, for me another thing to mow around!

Dave, get some "sanding sealer" and your blotchy stain problem will go away.

That is really beautiful work. Your family is indeed fortunate to share in your talent.

Glad you had a happy Independence Day.

"...something was amiss with our A/C unit...overnight, we are more like a 73 degree family".
Damn that's chilly, like "on vacation, already paid too much".
I use strategic fans.

Love your chairs--relaxed in plenty that were ancient back when I lived in the Adirondacks, and they just get better with age and wear. Sat in a plastic copy last week and it sucked.