I actually stole the post title from Blogonomicon who saw my FB post and recounted his own experience, so I figured I would use his title and link to him.  Anyway, just let me tell you about it - and I promise, this story will eventually involve food.

So I never leave work for lunch - maybe a rare occasion for a going away luncheon or something like that, but today I forced myself to plan on attending an organizational picnic by not bringing my own lunch to work.  But this is not where the food comes in because I never actually made it to the picnic.

I walked out to my truck in the parking lot and could see from several rows away that my driver's side front tire had to be completely flat, since the whole truck was dipped down like one of those low riders with hydraulics.   And as soon as I walked up to it, it was clear the thing was flat as a pancake.

I have to admit that, my first thought was to call a tow company, but since I'm not a Triple-A member or anything like that, I just said, screw it, I know how to change a tire.  My immediate concern was that I would have a hard time getting the spare down from under the truck or worse, that I would not be able to get the lugs off with the provided lug wrench.  I recalled a time when several years ago, I tried to help some lady with a flat, and her lug nuts were not coming off, and that was with me and another big guy trying together.

But I'd be luckier today.  First off, the F-150 has one of those little crank down things that allows you to lower the spare tire onto the ground without having to crawl under the truck and unscrew lug nuts.  Yay!

Next, before I even busted out the jack, I loosened each of the lugs and was pleased that it would all work out.  Then I got the jack out and commenced to raise the truck.  I really did not even think to take a picture of the tire totally flat on the ground before I raised it, but trust me,  F-L-A-T. 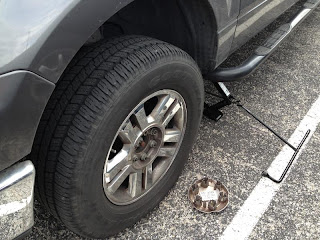 Let me state for the record, these jacks are probably one reason why you should just call a tow truck.  I had this ugly feeling the entire time I was raising the vehicle and especially when I removed the tire that the thing would collapse.  Oh, and Kudos to the person who parked next to me for not parking right on the line, or I would have never been able to get it done.

So here's the thing.  I was dressed in slacks, shirt and tie and I also had two meetings in the afternoon that I couldn't miss, so getting greasy and dirty was not a great idea.  I did have several people stop and ask me if I needed help, but I guess I feel like it is a manly thing to change your own tire rather than sit back and watch some young whipper-snapper do it for me.  And there will be time for that in a few years. 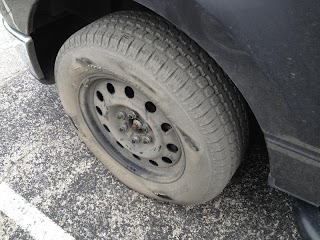 So this is what your spare tire looks like if you have never lowered it down to wash it before. 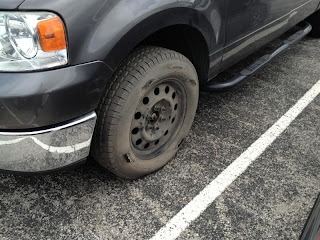 And this is what your spare tire looks like if you have never checked the air pressure. In case you can't tell, it is not flat, but certainly very low. 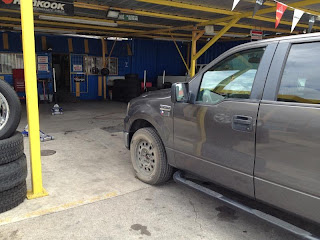 So, I skipped the picnic, drove down Military Drive to Tiger's Tire Shop and got hooked up.  While he was fixing the hole in my tire and all that, I ran in the bathroom and took a nice spit bath to get all the dust and grease off my hands.

So I look at the clock and realize that I have to be back in my office for a meeting in 15 minutes and having not eaten at all, I decided to run through McDonald's and get one of those Spicy McChicken's and a cheese burger off the $1 menu.

And this is when the real fun started.  I got back on to Highway 90 and was shoveling sandwiches down my throat to finish eating before my meeting, and suddenly, I realized that I was sort of choking.  I coughed a time or two, then that was it.  I was driving about 75 and realized that I could no longer breath.  I tried to do that little maneuver where you calm down and try to just muscle the hunk of burger clogging your throat either up or down.  And that's when I really realized that I really could not breath.  And  I was driving 75 down a highway.

It does not take long for you to imagine that your vision is starting to narrow or that you might be in a sticky situation.  I mean, who the hell chokes on a burger while they are driving?  If I die in a tragic car accident, I want it to involve drinking or texting or both.  At least then, people can say, What an idiot, but not laugh at me for eating and driving and choking.  These are the things you imagine when you start to see that bright light forming at the off ramp to Acme Road.

And that is when I used my steering wheel to perform the Heimlich maneuver on myself, and subsequently sent a chunk of a triple cheeseburger into my dashboard.  It only took one good thrust to the gut but I couldn't help looking over at a mini-van next to me and trying to imagine what the kid staring at me was thinking I was doing by forcing myself into the steering wheel.  Did he think I was listening to some Salsa music and I was trying to do some sort of weird form of twerking?

I am concerned but in a way, comforted that my life did not flash before my eyes.  I suspect this was just a minor little scare intended to remind me to slow down and stop worrying about the little things.  I was actually a minute early for my meeting, and when I walked in, several people were drinking beers.  I'm sure my Spicy McChicken would have been welcome.

Wow, that is really scary. I once choked on a vitamin and had to Heimlich myself--somehow, I don't remember how I did it--the pill shot out and my throat was rough and raw for several days afterward.

As for the lug nuts, this is why I always get the tire fixed and then put it back on myself. Sometimes they get them way too tight with those impact wrenches. I actually twisted a bolt off once because the nut wouldn't break loose.

I know it's bad, but was a hilarious post.

They say driving to and from work are the main time frames when accidents happen. Heck, I had a fender-bender when I was late to return to Lackland after picking up Bill Millers and eating it on the way back to the office.

So scary! Thank god you were able to get it out using the steering wheel. The first time we met Andy's girlfriend I had to do the Heimlich - she was literally purple and turning blue. I guess we are all guilty of gulping food in a hurry sometimes. I know I will be a little more careful after reading this!
Noreen

Glad you came out safe! Turns out, eating/drinking while driving should also be prohibited now, as it divides the driver's attention the same with using a mobile phone. The flat tire was just a prelude of the troubles to come. We should've known.