Adirondacks 7 and 8 and Other Important News...

My Furlough Friday got thrown out of whack this week due to important meetings I needed to participate in.  I first learned about a meeting I had to attend on Friday, so I thought - no big deal, I'll just do my Furlough day on Thursday.  Then Wednesday evening I got a call telling me I needed to be at a meeting Thursday morning.  So, long story short, I worked 4 hours (that I'll confess to) on Thursday, and 4 hours (that I'll confess to) on Friday.  Total gas savings by not having to go into work one day a week?  Do the math. 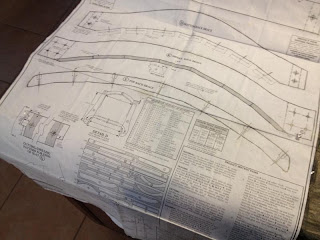 Wednesday afternoon, we applied the UTSA decals to the Cornhole sets then did the first several coats of PolyCrylic (see the update with pictures here).  That allowed me time to cut out the Adirondacks that I had drawn out prior to the Cornhole project taking over. 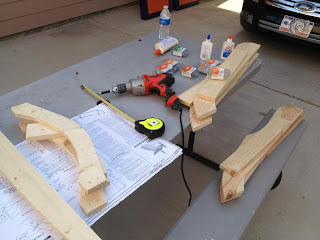 After cutting things out, I still needed to drill holes and sand, but that would have to wait until Thursday evening.  Thursday also gave me a chance to put the final coats on the Cornhole boards and they were ready for action Friday evening when the kids all came by. 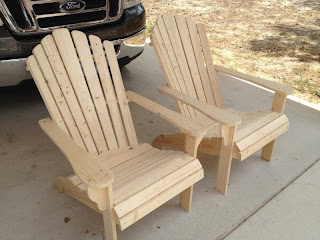 I'll spare you the details and the pictures since you've now memorized how these things go together, but I was pretty happy to have everything assembled Saturday morning.  All I needed to do was prepare the chairs, then stain them.  Thanks to a reader named Roy (and several other folks) who said I needed to use the Minwax pre-stain preparation, I was really pleased with how these chairs look. 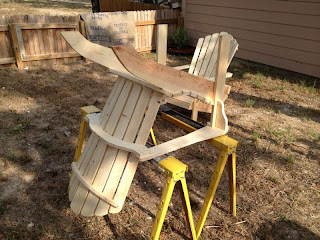 After the easy preparation steps, I commenced to staining.  And it didn't take me more than a second or two to look at the can of stain, then walk into the garage and look at the empty can I had from the previous chairs. 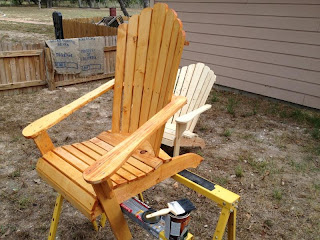 Oops.  I guess when I bought another quart of stain, I picked up Cedar Natural Tone.  I have done the previous chairs with the Redwood Natural Tone.  Oh well, we can all use a little variety. 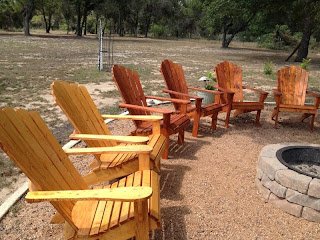 After two coats, they look great, but this is what they look like next to their darker cousins. 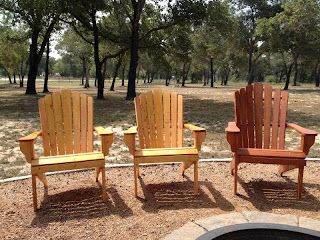 I'm perfectly happy with how they came out, especially considering the much more even tone with the use of the preparation product.  Looks like I'll need two more in the cedar tone, just to keep things even.

In other news... Am I the only person who gets tired of people parking like idiots and/or leaving shopping carts in parking spots rather than taking them to the little cart corral?  On Saturday, we had to run into San Antonio to get some chemicals for the jacuzzi.  I had already emptied it before I realized I was out of some stuff.

Anyway, the first thing that happened was that this big truck pulled in next to me as I was pulling out of the parking spot when Eva remembered I needed to grab a rebate coupon for some of the stuff I bought. 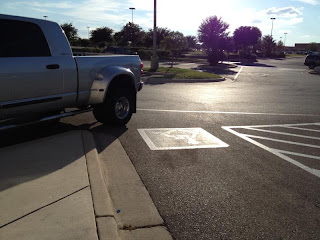 So I walked back in the store and saw what an inconsiderate jerk this guy was to anyone needing to use the only handicap parking spot at the place.  I mean, how do you not get out of the truck and realize what a jerk you are being? 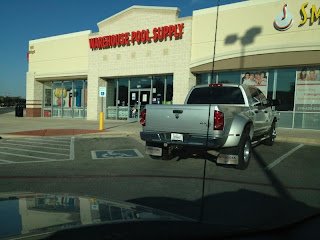 When I pulled out, I got this shot as well.  Hey, I drive a truck too and I know how hard it is to park at times.  In Texas, they ought to have a law against parking spaces only big enough for those stupid little smart cars.  But come on, this is just inconsiderate.  I guess his thought was that with those white stripes, the person could park there.  But if you notice, the ramp for a wheelchair is located in the white lines.  San Antonio is home to a HUGE population of wounded warriors who spend a lot of time recovering and getting back to health, and we have a huge population of retired vets.  Do everyone a favor and park nicely. 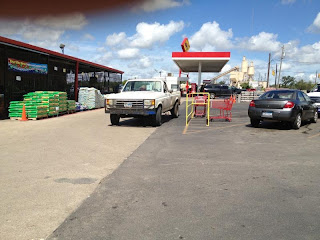 Oh, and the other day in Devine, I had to run into True Value (or Ace, whichever), and some complete jerk just parked his truck in the road.  I was standing in line at the register and did not see who it was, but several other people in line were all looking at each other with that strange blinking eye routine as if to say, "is this happening?"  I didn't stay around to see who the culprit was, but I did watch the news to see if a small town posse had shot and/or whipped the guy's ass.  No such information on that evening newscast.

Why are people so lazy and such assholes?  We had to run into Lowe's to grab one little item so I was going to park, and let Eva sit there and gab on the phone while I ran in.  The parking lot was crowded but I could see open spaces so I would pull down the first aisle, and the first open space I saw, some jerk had parked over the line.  So I see another, go down the next aisle, and someone has left a shopping cart in the empty space.  This same thing goes on until I finally give up and park half way across the parking lot from where I started.  The only consolation was that there were no obvious discarded poopy diapers littering my path to the entrance of the store.

Have I become that cranky old guy who just needs to stay at home and build chairs?

Right now we're living real close to the Alon Market HEB. There's one aisle where, at the end, there is a little half-space, obviously not a parking space and obviously not big enough to fit an actual vehicle in. Without fail, every time I have parked on that aisle (the only time I bother checking), there is someone parked in that little obviously-not-a-parking space. And sticking half out in the aisle. Given the neighborhood, no surprise it's always and expensive car, but you'd think if you paid the price for a BMW you'd be a little more careful with it!

If you haven't heard about those "I Park Like an Idiot" stickers you definitely should check them out. You can plaster them on people's cars anonymously. They peel off nice and easy, but it's a good prank and may alert them to their laziness

you should make those chairs for kids...and a long low table..to put drinks and bbq on...