We have been excitedly waiting for the new Love's truck stop in Natalia to open up, and on Thursday, at 7AM they were in full operation with loads of trucks, travelers and just curious locals eager to try something new, like Wendy's. 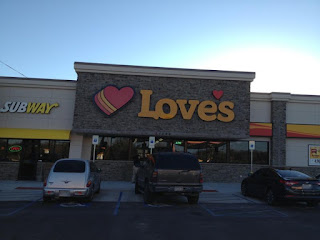 Just down the road in Lytle, we have been huge fans and regular customers at the HEB convenience store where the gas station is always full and the attached What-A-Burger is always busy, so I think it will be nice to have another option several minutes closer to our house. 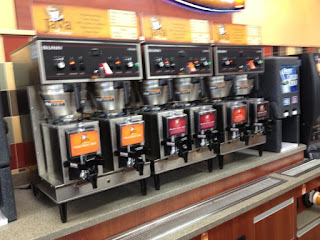 When we went in to grab a coffee and check the place out, we found exactly what you would expect from Love's, a clean, well stocked store, plenty of staff and an awesome coffee/beverage set-up.  I can easily see quick trips to grab a coffee (given the state of my crappy Keurig) without having to drive to Lytle or Devine.

But with all the excitement and development of civilization, there is a price to pay and I'm afraid we are just now seeing for real what we fully expected to be a problem.  The traffic caused by 18-wheelers attempting to negotiate the tight turns and narrow bridge on FM471 which crosses over I-35. 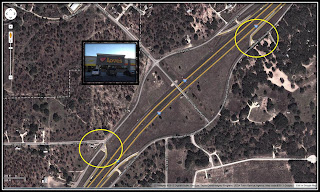 I have drawn a quick picture to show you what I'm talking about.  The bridge in the picture is at the end of FM471.  If you live over near Alamo Ranch in Northwest San Antonio, yes, it is the same FM471.  If you follow it long enough, you end up in Natalia!

Anyway, you can see that this is a fairly narrow bridge.  But more dangerously, the so-called buck hooks used for on-ramps back onto I-35 (circled) create a really awkward situation which will slow down traffic trying to get onto the highway.  Because it is such a short acceleration lane, combined with the fact that the trucks will be going slow just to negotiate the buck hook, merging into 75MPH traffic is going to be a problem.  And no, I do not want them to reduce the speed limit.  What TXDOT needs to do is fix the off-ramps and on-ramps so there is less of a sharp curve and increase the length of both acceleration and deceleration  lanes.

I'm sure the people in the small town of Natalia are happy for the new business and tax generation, but nobody wants to see a bunch of folks getting killed because of crappy roadways and poor design. 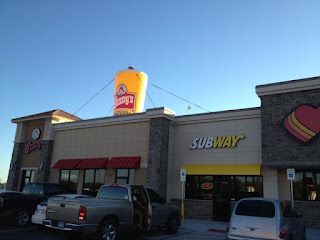 In the meantime, I am pretty confident there is a refreshing Frosty in my future.