A Regular Whirlwind of Activity...

Of course, I didn't seem all that active yesterday when, after eating a huge breakfast at La Pasadita in Natalia, instead of heading straight for our usual Sunday shopping at HEB Plus in Lytle, I instead went home and laid directly in my bed for about 4 hours straight, snoozing between episodes of Bill Kurtis on the Bio channel. 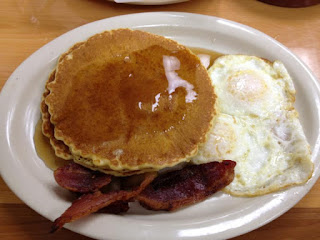 This was breakfast.  Is it any wonder I could not force myself to get motivated to do anything?

Oh but there was more food.  On Saturday, we met friends at an old favorite, Guillermo's downtown off of McCullough and St Mary's.   I gorged myself on the bacon cheeseburger then promptly consumed the accompanying fries.  The place is as good as ever, though something weird happened with the service.  I'm used to ordering at the counter, grabbing my own iced tea and then having someone from the kitchen bring out the vittles.  I guess now, they have regular waitstaff and frankly, not so bueno during our visit.  But, don't let that stop you from giving them a try, if you have not already done so.  I'm not gonna let an inexperienced waiter keep me from the great food. 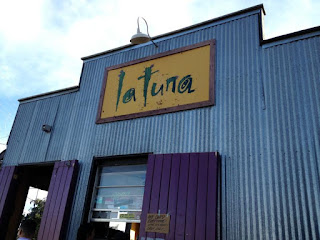 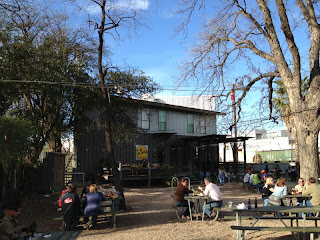 After eating, the dinner crowd started to fill Guillermo's, so we moved our little visit down the street to La Tuna.  I have driven by this place many times but never bothered to stop in.  La Tuna has a restaurant which I hear is good, but we didn't even step in. Instead, we planted ourselves on one of the picnic tables out in the spacious lot and had a refreshing beverage from the huge selection in the little ice house.

I'm just going to tell you, if we ever decide to sell this place and move into one of San Antonio's booming downtown housing areas - one of the new condo places or something a little historic - I could see visiting La Tuna quite routinely.  Or the Blue Star arts complex just across the street.  The feel of the place was really relaxed.

Of course, we needed some relaxation following the traumatic events of Thursday afternoon.

We have had a slight problem with our gate on windy days.  This is a driveway sized gate with a motorized opener so it doesn't latch closed or anything like that.  Normally, in the closed position, it is aligned to form a perfect fence, thus we can let Gracie out to play outside without worry.  What we have found though is that when it gets particularly windy, the gate pushes slightly away from the post, and this creates an opening that Gracie simply can't seem to resist exploring. 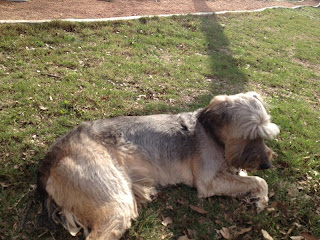 On Thursday evening, I was coming home when I got a call from Eva.  One of our neighbors saw her walking down the road and so she tried to herd her back toward our house, driving along side her and talking to her.  Unexpectedly, a huge dumptruck came up behind her and the noise scared Gracie something terrible, causing her to take-off in a total sprint for her life.  The neighbors kid's said they had no idea she could run that fast.

Instead of running toward the safety of our property, she headed off up the street into a bunch of empty lots.  The neighbor called Eva, and her and my son immediately went out and started the search for her.  It had already been an hour before I got the call on my way home.  Between the two of them, driving up and down the nearby streets hoping to find her wandering around, they were loosing their voices from calling for her.  When I pulled onto the street, I could see Eva's truck on the next street over, and my son driving down our street.  When I drove slowly past my son, he had the same look on his face that I am sure I had on mine.  My biggest fear was that the sun was starting to go down, and if we did not find her, it is a safe bet the coyotes would.

Just the previous evening, we had heard of the loss of Carver, the beloved family dog of my sister, Susan and her family.  This loss was still fresh on my mind when I decided to grab a light and  binoculars and head outside of our neighborhood to the other side of a huge ranch which backs up to our sub-division.  I thought perhaps if Gracie had gotten disoriented, maybe she would be on the next street over.  Before I could make it all the way around, Eva called me, screaming into the phone that she found her.

As some deer were walking through the property in front of ours,  both Eva and my son thought they saw some movement nearby.  It turned out to be Gracie but she could barely walk.  I don't know if she had been there the entire time and only got up when the deer came near, or if she had finally come running from wherever she had been.  Either way,  Eva talked her in close enough to a gate, then carried her and placed in my son's car.  Her feet were bloody and full of stickers.  She was in shock but obviously glad to be found.

We set her down in the kitchen and as I tried to pull stickers from her paws, she went to town just pulling them from between her paws.  The pads looked pretty rough as if she had just run so hard on the rocky asphalt of the street that they were scraped bad.  Then, it was only made worse running through the thick brush of several untamed properties.

Our neighbor Phylis who does a lot of work with animals came down and checked her out and gave us some Tramadol  for her.  Eva picked up some spray from the Vet that is supposed to help wounds like this, and after all that, Gracie just slept solid for the rest of the night.  I had to carry her outside and set her down just to pee.  It was so pitiful watching her try to walk, and honestly, 5 days later, she is still walking quite gingerly, but seems like she'll do fine. 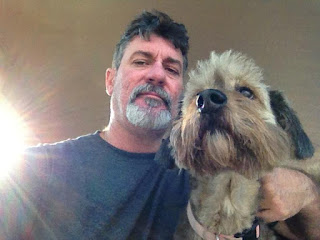 This is the problem with having dogs.  You love them like people but are almost guaranteed to out-live them.  Then you get a new one, and the same thing happens.  I'm not ready for Gracie to be eaten by coyotes, so the fence is getting worked on.

And then it really got windy. 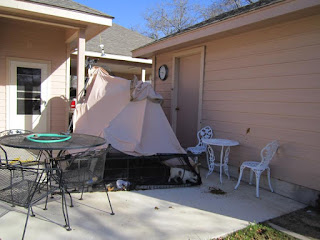 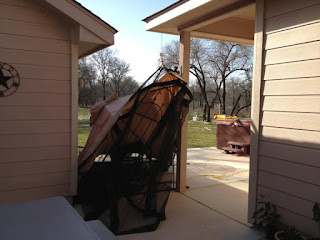 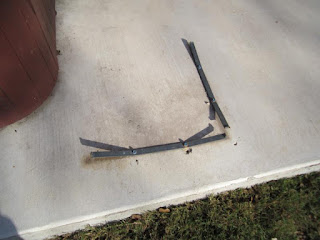 And as if we haven't been through this before, we lost the  little covered canopy over our hot tub.  Dammit!  I'm done with wasting money on these things.  The first time, I hadn't secured it very well to the concrete patio.  This time, the wind ripped the light metal structure apart, leaving the bottom brackets securely fastened to the patio.  Great. 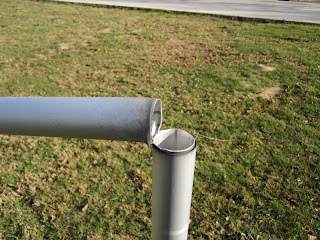 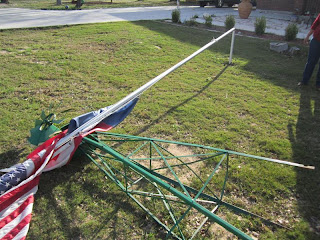 This wind is un-American!  It snapped our flagpole and dropped old glory on top of the John Deere colored windmill. 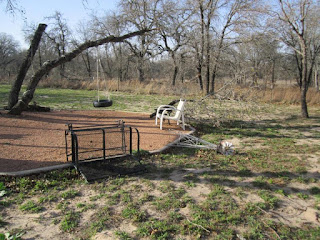 And then there was they usual damage - turned over benches, downed limbs.  The usual.  It does get really windy out here.  As long as the DirecTV antenna stays up, we'll be alright.

And with that - my DVR says it is time to watch last nights episode of The Walking Dead.  Hopefully your weekend was not nearly as blustery.

So glad you were able to find Gracie before night fall and that she is healing.

Yeap, those winds did a number all over the State.

I hate to read your blog late at night because I know you are going to make me hungry from all the good eat them up places you and Eva visit.

them winds were really scary and did a lot of damage everywhere...so glad you found Gracie and she's home safe.