I don't let myself get upset or excited over the fact that I can't make daily posts on this blog, so hopefully it doesn't bother you, either.  There just aren't enough hours in the day, so says the fat guy sitting on the recliner in front of the TV, fast-forwarding through a DVR full of "must watch" shows.

Before I give you a recap on what we've been watching lately, I need to tell you about my mom's visit and Little Kitty.

Week before last, my sister and her husband drove down to visit San Antonio and her son (my nephew) and his family, so my mom and her cousin flew over from Tampa.  In short, it was a nice little meet-up in a centralized locale, and let's face it, San Antonio is a great place to visit (until it gets cold and rainy).  And even then, if you are coming from Minnesota like my sister and her husband, cold in rainy beats -20 and snow blizzards. 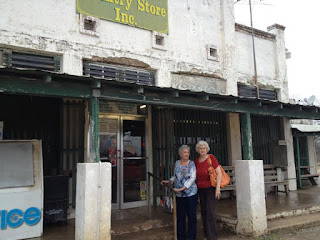 After my sister and her husband returned to the frozen tundra, my mom and cousin Shirley came and stayed with us for the weekend. We had a great time, showing them around the Tri-city area (Lytle-Natalia-Devine), and even took a nice trip down the road to Yancey for a visit to the general store there.  My son drove down from OKC and got to introduce his daughter to my mom for the first time, and that was truly wonderful. 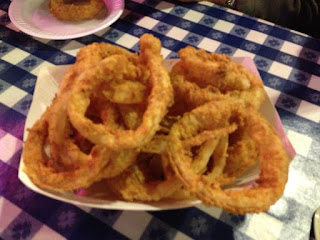 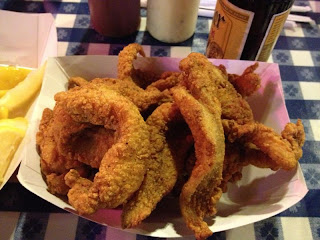 We took a trip to the original Clear Springs Restaurant up near New Braunfels since it was my Mom's father who found the place during a search for good catfish years and years ago, and we have loved it ever since.
After thoroughly stuffing ourselves with onion rings and catfish, we headed up the street to Buccee's so they could purchase some Texas souvenirs.  If you haven't experienced Buccee's, just know that they have an enormous selection of Texas stylized gifts and memorabilia that can keep you occupied for an hour.  And, the bathrooms are very, very clean. 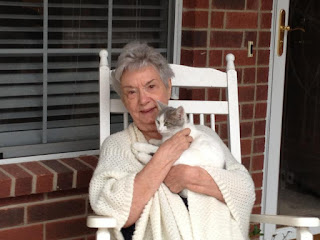 My side of the family has always been pet people, both dogs and cats.  It was a no-brainer that my mom would take an immediate liking to Little Kitty (or Kiki (or Keke)) as Eva calls her. 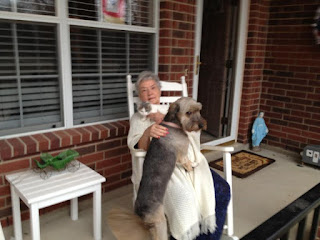 And it was also clear that Gracie would be jealous of their time together.  Everyone, the pets, my mom, Cousin Shirley and my sister's family all enjoyed the visit to San Antonio, and we are hoping for another visit when the bluebonnets make an appearance. 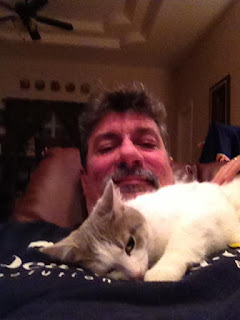 Speaking of our little stray cat that has adopted us, we took Little Kitty to the vet to get her fixed.  The last thing I need is more little stray cats entertaining me.  They will give you pain meds or, if you are willing to pay, they'll just shoot-her-up with some sort of Kitty Morphine before she goes home.  We opted for the (clearly) more expensive route and the poor little thing was just out of it.  She was walking around like a little drunkard, bumping into things and occasionally just laying down before trying to move some more. 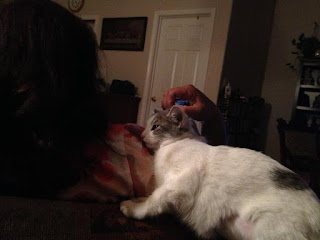 Even Eva felt bad for her and offered a shoulder to lean on.  Of course, we have converted our garage into an apartment for her, complete with a selection of beds, a heater, a little cat playground and a kitchen, but given her state, it was obvious she would be staying in the big house for the night.  I set her up in the laundry room with all the essentials plus a litter box (which cats naturally know how to use).  She meowed a few times during the night, but not enough for me to let her out, and by morning, the kitty drugs had worn off.  She is still feeling a little puny, but for the most part, is doing well.

While my sister was here, I suggested a few podcasts that I listen to (does anyone listen to the radio anymore?) and thought I might highlight a few.

I love interviews and biography sort of things, but I like to be entertained.  This is why one of my favorite podcasts, and one of the most popular on iTunes is Marc Maron's WTF.  Yes, WTF stands for exactly what you think it does, so if you are squeamish with potty mouth, beware.  The first time I heard the opening, not that I'm squeamish, I was sort of taken aback.  But Maron is the best interviewer ever.  He has a studio set-up in his garage and comedians and movie stars and musicians come over to his house, sit down and just chat.  This isn't a pre-scripted 4 minute interview on Leno where he plays the straight man while the star plugs their latest movie.  If you have never downloaded and listened to a podcast, you might want to scroll through the list of people he has interviewed and try it out.  Just last week, I was shocked at how interesting an interview with Seth Green could be.  Seriously, give WTF a try.

I just started listening to one that is not quite as polished as Maron called, The History Chicks.  From what I can gather, these are two moms recording their podcast from a family room or someplace in the house, because you can occasionally hear kids playing.  Never-the-less, they research a person in history, then tell about it adding in their own remarks and such.

I am really enjoying several podcasts with the theme of people telling stories.  The Moth is a well known series where people go to these events at coffee houses or big theaters, get up on stage and tell a personal story, usually written in advance.   These stories are usually fairly short but very entertaining.  Another one I enjoy is called Strangers where host Lea Thau explores different stories that have a theme involving strangers.  A recent weird one involved a guy who asked her to borrow some of her son's poop.  Don't let that scare you away, the story was really interesting.

Anyway, I have an iPhone full of these podcasts that keeps my drive to and from work entertaining.  At very minimum, if you don't like the idea of these, you owe it to yourself to listen to the weekly This American Life with Ira Glass podcast.  They take the radio show and convert it into a podcast.  Good stuff.

Eva can't enjoy American Horror Story with me because of the scary music at the beginning of the show.  If you saw season one where the story centered around a house that had issues, like me you were surprised to find many/most of the same actors in an asylum for the mentally disturbed in season two.  I have never really considered myself a fan of the horror genre per se, but I enjoy good writing and story telling.  The season finale happens on Wednesday but I'll have to wait to watch it when Eva is doing something else so she doesn't get the willies!  I must warn you in advance, this show is very nearly pornographic given some of the story lines and images, but don't let that stop you.  Jessica Lange is incredible in AHS as is the make-up artists who help create some of the most disturbing imagery in the asylum.

Justified and Shameless are both back on for new seasons.   If you ever saw Deadwood and appreciated the rich, sophisticated dialog coming from the seemingly uneducated hicks, you will thoroughly enjoy the amazing writing of Justified.  Likewise, if you ever watched an episode of Jerry Springer and wondered, what do these people live like when they go home, Shameless has got you covered.  It is nothing short of Springer, the home version.  Seriously, William H. Macey and the girl who plays his daughter, Emmy Rossum, are spectacular.  I'm eager to track down the original UK version of this show and watch it.

Last night we watched a movie called Hemingway and Gellhorn.  It was sort of a documentary but played out like a regular movie.  I loved the way they incorporated actual black and white war footage and easily faded back into color creating a seamless transition.  I think we also found out that, pretty much every movie we have seen with Nicole Kidman, we like.

We had a movie on our DVR called 50/50 with Joseph Gordon-Levitt and Seth Rogan and sat down to watch it.  Wow!  That was an incredible movie.  I keep thinking how the little kid from 3rd Rock has transformed into this total movie star. Anyway, it is a story about a young guy who gets cancer.  I'll spoil it and tell you that he lives, but you already know that since you have seen Gordon-Levitt in The Darknight Rises and Looper since this movie was made.

And I think this is enough for one morning.  What movies, TV shows and podcasts are you checking out?  Any tips on stuff I need to be watching or listening to?

Try the Wait wait don't tell me podcast. Sharon told me about it and I love it!
Noreen

where do you find podcasts, remember I know jack about pretty much every thing but football and skunk eggs.
isn't it great when relatives come to visit and everything goes great?..there is usually at least one relative in my family that ends up stomping of like a 9 year old.

@Noreen: I have listened to several episodes of Wait, Wait. Not at the top of my list, but well worth the download.

@JackieSue: Go to iTunes. Even if you don't have an iPhone or iPod, you can use iTunes with your regular PC. When you go to the iTunes store, look for the podcast section. From there, you'll see the most popular ones, but you can do searches for topics that interest you. From there, download and listen whenever you like.

You will be happy to know that there is not a Rush Limbaugh podcast (that I am aware of), but you can find plenty of good progressive fun!

I have a couple more you might like. Look up "The Useless Information Podcast." It's by a high school science teacher who reports on strange stories "from the flip side of history."

Also check out "How to Do Everything." Two guys take questions submitted by listeners, then call up someone who might know about it on the phone and ask them.

Both are funny and interesting, but kind of short. They both run about 20 minutes per episode.

@Alan: Thanks for the tip - I'm downloading both of these now!