We generally avoid such madness as work related Holiday (Christmas) parties, especially when they involve several hours at one of the loud bars downtown in San Antonio, but this year we went and we were glad we did.  Instead of just dinner and merriment with co-workers and friends at Pat O'Brien's only to make a late night drive back home, we made reservations to walk right across the street to the historic Menger Hotel and hope for a visit from some of the famous ghosts that are said to wander about. 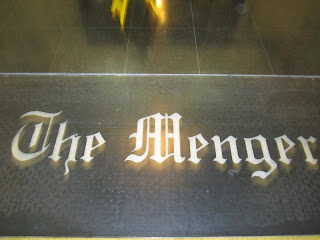 I'll let you read the web-page for the full story but the gist is, the Menger was opened in 1858, hosted lots of famous folks, probably most notably, Teddy Roosevelt and his Rough Riders, and apparently, many of them liked the place enough to stay as guests long beyond check-out, pun intended.

Due to the proximity of the Alamo, (just steps from the hotel) and it being connected to River Center Mall, we have walked by the hotel and admired it from the outside at least a hundred times as we would park in the mall, then walk down to the River Walk.  Looking at the shops through the windows facing Alamo Plaza, we have peered in and seen price tags that basically convey, if you have to ask, you can't afford it.  And frankly, I have always thought that if I walked in there, I might be under dressed.   Eva on the other hand has always dreamed of staying the night and seeing the treasures of history and old elegance.  Friday night, she got her chance.

I'll save the wondering and tell you up front what it cost.  We went through Expedia and got what appeared to be the least expensive room, a king bed with the window facing River Center.  Listed as $149, after San Antonio's hotel tax, at was just at $179.  Parking (after taxes) was $30.  We ordered room service for breakfast and that was another $30.  Though very tempted to splurge, we did not go for the $8 each bottles of Fiji water in the room.  If you are just looking for a place to stay the night, The Crockett Hotel is across the street behind the Alamo, and you could probably get a room for half.  Bottomline, it was well worth the cost, to us, and frankly, we intend to go again. 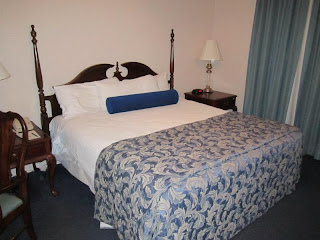 Taken out of the bigger setting, our room was not what you would consider elegant.  In terms of amenities alone, you might feel as though you were staying in the old spare room at your great-grandmother's house.  The furniture, though nice was that kind of worn antique that the guys on American Pickers might get giddy about, knowing someone could restore it.  That's my polite way of saying, it was old and well used. 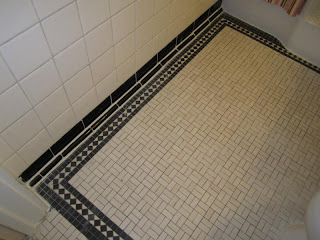 The room did have a TV but it was an old 19 inch model that I couldn't help but imagine the ghost of Teddy Roosevelt walking in and saying, This piece of crap was old when I stayed here.  The bathroom clearly had been added during a renovation in the 50's or 60's, and though the tile was beautiful, it is probably time for an update. 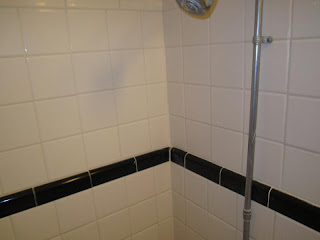 The commode reminded me of the kind we had in basic training, and the retrofitted shower was a hoot.  I was doing a crazy shower dance (think, the scene from Flashdance but with an old fat guy) because the water kept alternating between scalding hot and freezing cold.

If it sounds like I'm complaining, I'm not.  The room at the Lytle Best Western was far superior in terms of amenities and modern furnishings, but I take this like a night of camping in the woods.  Yea, it might suck a little being in a sleeping bag laying on a dirt floor, but the beautiful surroundings make up for it in the morning. 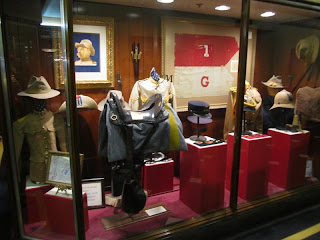 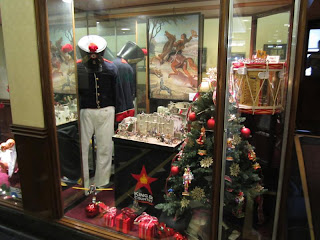 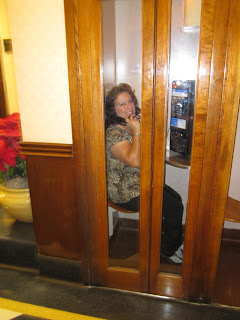 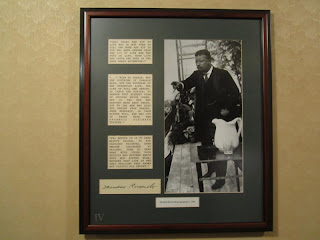 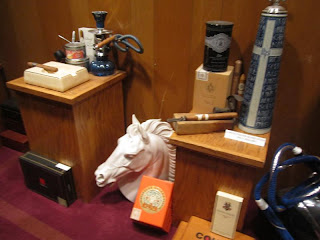 When we arrived Friday afternoon and handed our truck and keys to the valet, it was all I could do to get Eva to walk with me to the front desk to check in.  The Menger is a museum of itself with incredible pictures and displays of the events and people who have been past guests.  You could spend hours walking up and down the halls just inspecting the memorabilia. 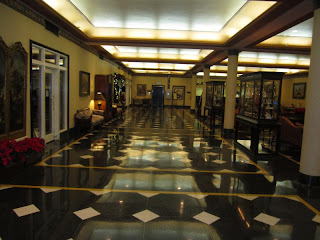 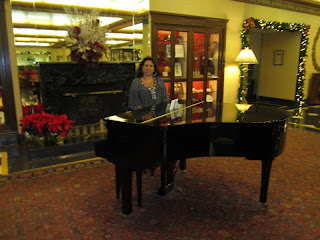 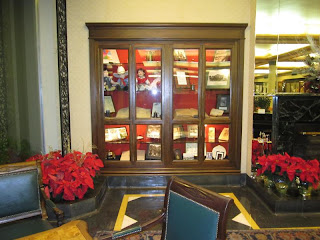 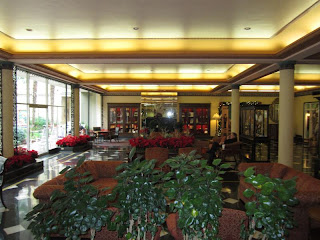 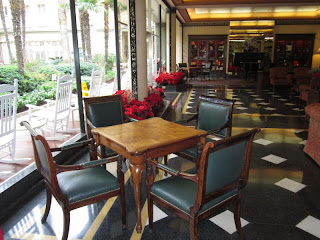 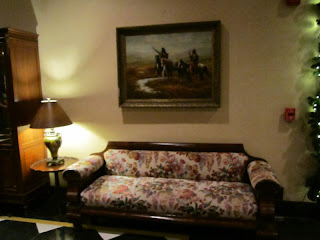 There is a large open living room sort of area in the lobby that I can just imagine is where many people spend time visiting with friends and relatives.  There are couches and chairs everywhere along with beautiful paintings, antique furniture, and pieces of art. 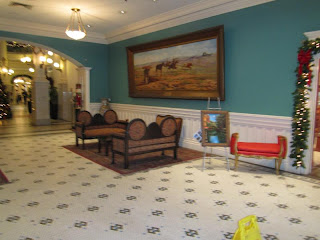 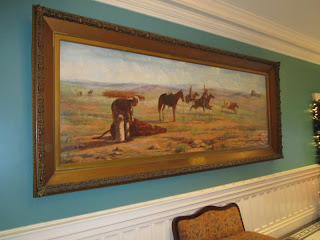 There is a really huge painting called Vetting Cattle that was seen in the Benedict home in the movie Giant.  It hangs in the old front lobby of the hotel, and looks incredible.  Just off that lobby is one of the shops that we have peered into in the past, J. Adelman Antiques.  As I stood there admiring paintings, the shopkeeper lured Eva inside to look at expensive items.  He insisted she inspect an emerald ring that caught her eye.  It was magnificent for sure, but $32,900.00 is just a little more than I'm willing to spend on a whim. 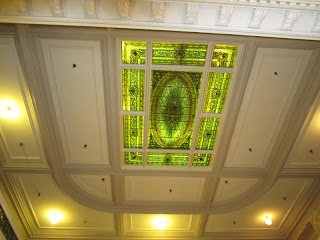 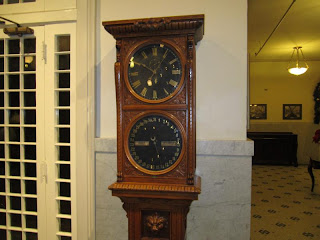 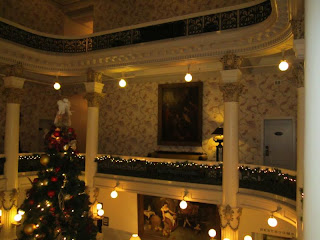 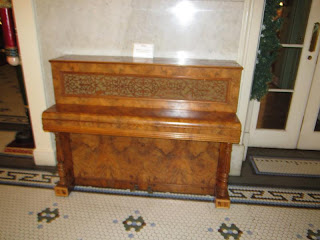 Our room was in the original part of the hotel above the Colonial Room Restaurant (we awoke to the smell of bacon), and to get there, we walked through this wonderful open area loaded with antiques and paintings.  The room extended up three floors and is topped with this interesting leaded glass skylight.  My pictures just don't do the place justice. 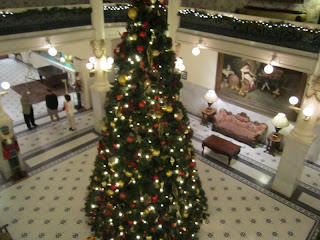 Of course, it is Christmas, and San Antonio, long known for turning the River Walk into a Christmas wonderland is not to be out done by the many huge decorations inside the Menger.  That tree is huge and beautiful. 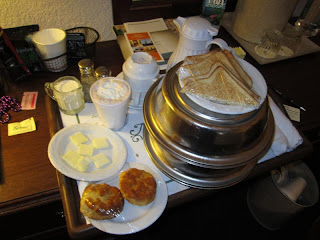 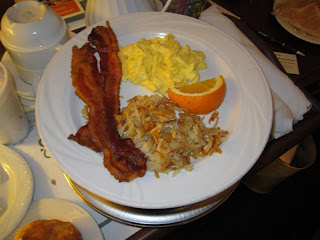 Our stay did not give us time to explore the famous Menger Bar or the Colonial Room Restaurant, though we did get to experience a fantastic breakfast via room service.  We had scrambled eggs, hash browns, bacon, and biscuits along with coffee and hot chocolate.  After a late night, this really hit the spot. 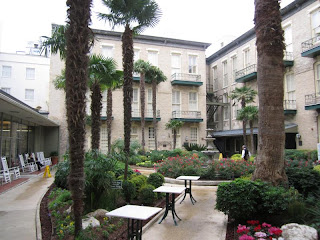 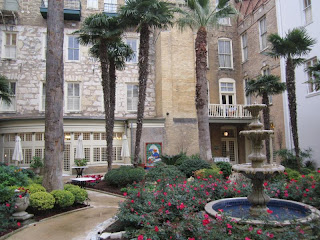 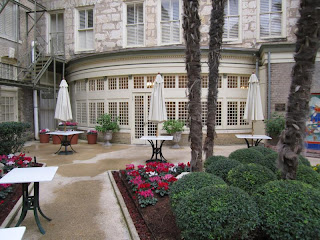 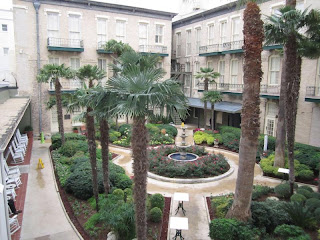 After breakfast we walked around the hotel to see the rest of the place.  To me, the garden inside the courtyard of the hotel is spectacular.  In reality, it is more of a smoking area I suppose, but it was very well maintained and beautiful.

I think we'll plan a time where we can check in as early as possible, stay in a slightly nicer room and enjoy some dinner and Mango ice Cream in the hotel restaurant and maybe have a drink at the Menger Bar.  Whether you decide to stay there yourself or not, the next time you are walking by the Alamo, why not walk into one of the shops at the Menger, then find your way inside the hotel itself.  I think you'll enjoy it. 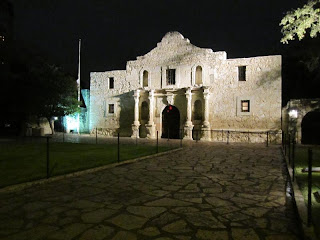 This is the best picture I have ever taken of the Alamo.  On our way back to the hotel after the Christmas party, we found that the Alamo takes on an almost quiet church-like setting.  The crowds of tourists are gone and the few people that are wondering around seem to turn off the boisterous party-voices found just 500 feet away along the River Walk.
Posted by Dave at 9:08 AM

I think the problem some of these old hotels run into is trying to update the rooms, and doing it at an architecturally uninteresting time. The Menger is wonderful to roam around in, though.

My mother-in-law stayed at the Crockett a year or so ago. It's not nearly as interesting in the common areas, but the rooms are nicer.

Me, I still want to stay at the Günther one of these days...

The Menger is very nice, in a historical sense. My wife and I have checked out the rooms when planning for a stay overnight in the downtown area, but we were not impressed with the quality of the rooms, especially given the price. I agree with Sabra about The Crockett; the rooms are nicer for the price.

The Menger Hotel as a whole is VERY cool, but I wouldn't want to stay there. (Nice camping metaphor, by the way).

P.S.: Sabra, my wife and I have stayed in the Gunther before, and we liked it. The St. Anthony, not as much, though.

We have stayed at both the Crockett and the Guenther. I have to agree that the rooms are much nicer/newer, but I also suspect that if we were staying in the newer part of the Menger (and paying a higher rate) we might get to experience something like what we saw in pictures on the web page (the Menger's, not mine).

Honestly, it is the common areas of the hotel that we enjoyed so much, so maybe we should just have dinner in the Colonial Room and a drink at the Menger bar, then walk down the street to a different hotel!

That was a good read. You should do more hotel reviews.

@AlanDP: Thank you, Alan. If I had more money to spend on hotels and more time to spend on the blog, I would!

you hotel is really very nicely decorated it impressed me lot... One can spend his/her precious time here. it is nice especially for newly married couple for there honeymoon:)
Hospitality furniture

Really beautiful hotel ,interior look is very nice i like it very much.