Yeesh.  It really was an exciting game if you are a Roadrunner fan or if your kid plays on the team or in the band, but other than that, at some point you begin to feel bad for the other team.  56-3 was the final tally, and I don't think it was really that close, to be honest.

I am not a huge sports fan these days, but we had a really good time for as long as we stayed (we left about mid-way through the 3rd quarter due to the Dallas trip).  I am convinced that the reason to attend is for the atmosphere, and being part of the crowd and enjoying the people around you.

During the half-time show, UTSA has a group of dancers who come out and perform a dance routine.  There is one male member of the dance troupe and frankly, he steals the show.  There are of course the nervous giggles by people who can't imagine that a boy would want to dance like the girls, or the obligatory <gasp> I wonder if he is "that way".  Please.  This dude is going to end up dancing on Broadway.  I only wish I had video of just how good he is.  But not unlike the Northwestern Oklahoma State football players who didn't seem good enough to compete, you have to feel a little bad for the ladies in the dance troupe who give it their all only to be lost in the beautiful spectacle of it all.   At the end of the dance routine when the entire dance squad ended with the splits, the entire crowd of 26,000 let out a loud "ouch" before cheering wildly. 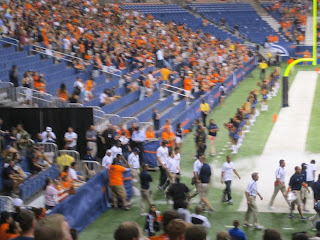 There was a slightly less exciting part that I really shouldn't comment on, but I just have to.  First of all, nobody is going to accuse me of being model material, and thankfully for you dear readers, I won't be posing in a Speedo and posting it here for your eyes to explode over.  Having said that, I do think that we might want to rethink some of the outfits, given San Antonio's continued position at the top of the Fattest City in America polls year after year.  This post is useless without photos, but let me set the stage:  Along with the Spirit of San Antonio Marching Band, the entertainment includes a group of flag wavers and a very small group of dancers - not the same dancers that perform on their own without the band, but about ten or twelve more shapely members...

First, the uniforms worn by the flag waving people are horrendous.  I've seen sexier outfits modeled by great-grandmothers in Iraq.  In fact, remember the lady in the Olympics this year who was permitted to participate by the Kingdom of Saudi Arabia?  I suspect the same designer did her outfits and the UTSA flag waving team.

And then there is the situation of the other dancers.  I think they are all lovely young ladies simply trying to participate in the school spirit and they should be commended for a willingness to get out there and put it all out for the home team and appreciative crowd.  The ladies sitting in the stands a row above us did not agree.  The comment from the mother (probably in her 50's) to her daughter (in her late 20's) was, "Hush now, those are someones daughters."  To which the daughter replied, "But Jesus, mom, you don't try to squeeze 240 pounds into an outfit that size and expect it to be a pleasant scene."

Eva quickly turned to the lady and said, "Don't worry; none of our kids are involved."  With a sense of relief the family above us then proceeded to shred the performance and appearance of the group until thankfully, the band finished playing, thereby putting the girls out of their misery.

Honestly, I support full participation by everyone regardless of athletic ability or appearance.  I'm just not sure this was the best way to present it.  But perhaps by the next home game, a few more of the girls will have improved enough to do the full cartwheel, rather than just kicking their feet 14 inches off the ground and calling it a day.

I'm surely going to hell for this post.  I apologize to any offended dancers or their families.
Posted by Dave at 7:55 PM

It the tutu fits, stretch it.

Yeah, I have seen that.