We had the good fortune of spending several days with Mya the Bee this week, giving her parents a little vacation (if you consider going to work a vacation) and giving Eva someone to dance around with during Zumba video time.  Everything was going quite magnificently up until about Friday afternoon when I came home from work early feeling a little queasy.  There has been something going around at work with various people calling in sick.  I never get sick, so I just assumed they were slackers.  But early Friday, I was beginning to feel it and made my way home by 3pm. 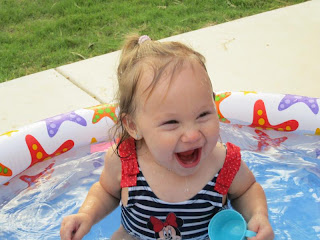 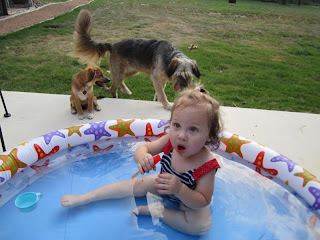 Lifeguards Maggie and Gracie stand by as Mya eats a Popsicle
Amazingly, by early evening, I felt well enough to jump on the mower and work on the lawn a bit while Eva and Mya splashed in a little blow-up pool on the patio.  Eva didn't actually get in the pool, but she did splash Mya who did swim around for a while.

Unfortunately, by about 9PM on Friday night, Eva was feeling whatever I had felt before, and she made a quick retreat to bed.  And then, how to put this delicately, got up several times during the night.

Saturday morning, I didn't feel all that hot, but I was able to load up Mya and take her to spend the day with her grandmother and great-grandmother.  We spent the majority of the day dozing on and off, her in the bedroom watching some Bio channel thing about ghosts and me in the living room watching various murder cases on a channel called ID which I was not familiar with.

By 4pm, we were up and ready to go pick up the bee, and though Eva could not bare the thought of food, I was capable of consuming the Number 5 with grilled jalapenos, sub onion rings and some cool swamp water at Whataburger. 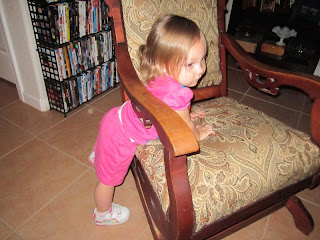 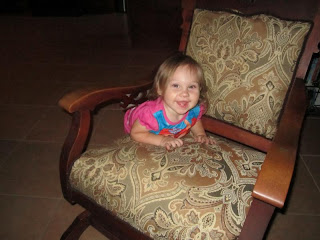 Somebody is stuck!
Thankfully, whatever we got, didn't get the bee.  She is a little pistol, for sure!  By the way, that is the platform rocker Eva found at a flea market for $40.  The new fabric she covered it with cost more than the chair, which is usually how these great deals end up.

By Sunday morning, we were up and well enough to make the drive to Fredericksburg, the meeting point between here and San Angelo where the bee actually lives.  Eva still hasn't decided on whether or not she can handle anything besides Saltines, but I have a few suggestions from readers on "must eat" places, including Alamo Springs Cafe and Hondo's.  We'll see what looks doable once we get there.

Hope you can make it to Alamo Springs Cafe. Check out the bat cave if you can (not sure if it's open) and look for the vintage railroad embarkment. Another little "gem" that I recently discovered was the old train bidge near Comfort located the James Kiehl River Park. Work a look since you're heading back South anyways. Real nice river to sink your feet in.

For some reason I thought Mya was your granddaughter. She is a cutie.

Glad Eva and you are feeling better.

@Anon: Hope you can make it to Alamo Springs Cafe
We'll have to hit that one next time around. We ended up at Hondo's (A full report to follow). As it turns out, when we left, we took 16 toward Kerrville. It added about 15 miles, but was a nice drive.

@Ms.Belinda: No, Mya is the daughter of Eva's niece and she is also our God-daughter, and one special little Bee!

@ Stacia: I think we are almost there! Thanks.

What beautiful little backyard inhabitants you have! Guess what - one of our Atlanta ancestors (Gddy Gower's half sister, so some kind of great-great-great aunt to us) was named Mary Bee Gower. :->)

Hope you are all over the yuckies. Sounds like what I either brought off the plane or caught in Brandon. Came on very suddenly, but didn't last long, thank goodness. I spent the whole visit waving at Dad from across the room.

What beautiful little backyard inhabitants you have! Guess what - one of our Atlanta ancestors (Gddy Gower's half sister, so some kind of great-great-great aunt to us) was named Mary Bee Gower. :->)

Hope you are all over the yuckies. Sounds like what I either brought off the plane or caught in Brandon. Came on very suddenly, but didn't last long, thank goodness. I spent the whole visit waving at Dad from across the room.