I have an ongoing project of scanning in the hard copy photographs that fill boxes of photo albums throughout the house. As I was going through yet another shoebox full of pictures taken over the years, tossed in no particular order, I stumbled upon a picture of my father and I standing on a huge fallen tree at Big Trees or Big Basin, I'm not sure which, State Park in California. 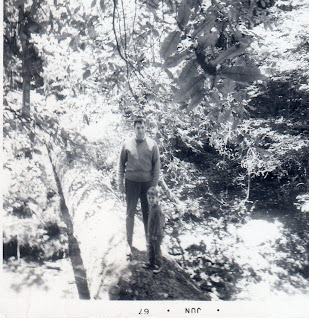 There is slightly more to the story than this image of my father standing there, and me, not quite 4 years old.  The family story, mostly exaggerated like so many urban legends, that while we were camping, something we did often in those days, I had wandered off a few feet from the campsite.  My parents heard me screaming, "He's gonna get me!  He's gonna get me!"

I could liven the story up and suggest that it was a huge grizzly bear or perhaps a rabid coyote, but as this alleged event unfolded, it was nothing more than a chipmunk, just as scared shitless as I was, at the other end of the log.  Poor little guy.  Both of us.

I know it is strange, but I actually recall standing on this huge log with my father.  I can only assume the photo was taken by one of my older brothers or sisters, probably earning a merit badge for some scouting project.  But before tonight, I had never seen this photograph at all.  My mom sent me several boxes of pictures, and as I was thumbing through a few envelopes tonight, this one just fell out onto my desk.

I was much more baby-like at that time.

Aw...you kinda look like Opie! What a great photo!

@Anon: My sister confirms - it was Big Basin.

@MMBI: Opie from Sons of Anarchy? Yea. I get that from time to time ;)