On Sunday we took a nice drive down to two small towns I had been wanting to visit for quite a while, Crystal City and Carrizo Springs (I'll post pictures and details later), and on our way back up I-35, we stopped in Pearsall to eat at the Hungry Hunter. 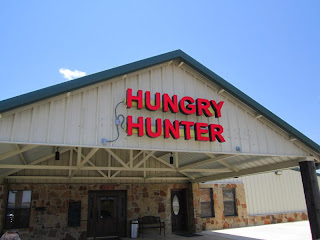 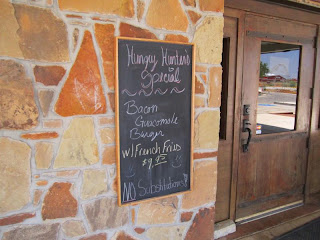 We had seen a billboard in Lytle for the Hungry Hunter back in October or November and even drove down to Pearsall to give it a go some time ago, but they weren't open yet.  But as we drove back from our short day trip to the no mans land that is that part of Texas, we were eager to give them a try. 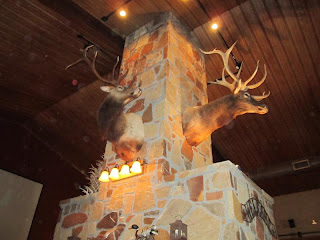 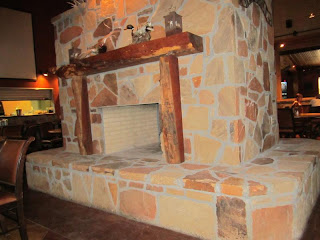 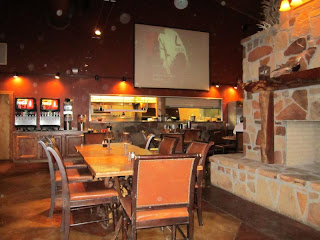 Inside, we really liked the look of the place.  Lots of Texan hunter, rustic looking tables and pictures and some good looking deer mounted on a huge fireplace.  If you have ever been to Islamorada at the Bass Pro Shops, this place looked like a slightly smaller version done on a 10th of the budget.  I suspect the targeted audience of hunters won't mind as long as the beer is cold and the steaks are big. 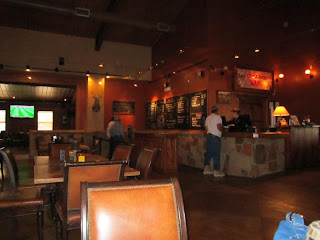 For it being a full service restaurant and bar, I was a bit surprised that they had Dairy Queen style ordering where you walk up to the register, order your vittles and pay, then get your cups for the soda fountain and a number to place on the table you choose to sit at.  I'm not opposed to this set-up per se, I was just a little surprised that they went this route.  My bill at DQ comes out to about ten bucks and features hard benches in back to back booth seating; this was not that. 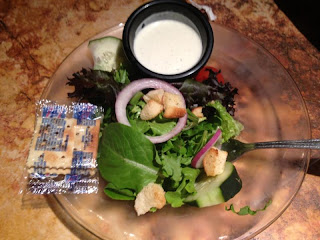 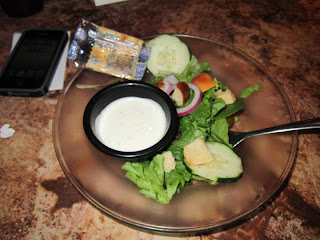 They offered a Hunter's Sirloin 8oz steak that comes with two sides for $12.00 (another $2.00 for drinks).  We both ordered that and for one of our sides, we each got the house salad.  I thought the salad was fine, served on chilled glass salad bowls and exactly 2 croutons per serving.  Instead of providing silverware with napkins, they salad came with a salad fork.  Since there wasn't a knife to cut my onions, I just dipped them in ranch and ate them like onion rings.  And just about the time my mustache was covered in ranch dressing, I realized that I still didn't have a napkin.  Not to worry.  Eventually, surely with the delivery of the steaks, our server would bring the napkins with new silverware for that course. 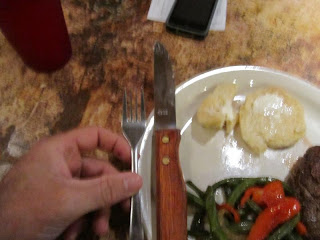 Not so.  In fact, our steaks came out with a knife across the plate but know new fork and still no napkin.  We both grabbed our forks from the salad bowls before the server cleared them away and then laughed at the huge knives compared to the little forks while the nice young lady rounded up some napkins.  Thankfully, I was able to use my tongue to retrieve the Ranch dressing fragments dripping from my facial hair. 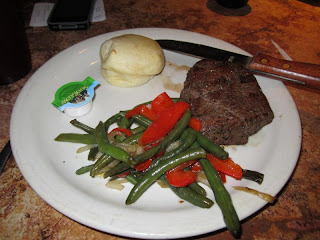 My plate was very good.  My second side was green beans.  For flavor and appearance, they added in some red peppers, and I was extremely pleased with the fact that they were both cooked enough and delicious.  The biscuit/roll served with the steak was fresh, soft and tasty.  I ordered my steak medium and it came out medium-well, but rule number one is never send anything back to the kitchen.  Frankly, it was just fine. 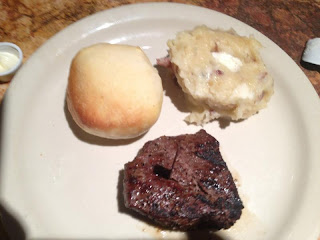 Eva's second side was some buttery hand mashed potatoes and they were very good.  She ordered her steak medium-well, and as you would expect, it was served well done.  She was a bit put off by that, but not enough to tempt spit.  The big concern was that they really seemed to over do it on the Montreal Steak Seasoning (or whatever they use for flavoring).  Initially, for both of us we found the taste to be overwhelmingly salty, but I suspect if you are hungry enough, you adjust.  After a few bites, I think we were both fine.

The Hungry Hunter has a menu full of the typical starters averaging $6 to $8.  They have fish, chicken and actual steaks (JD's Porterhouse is a 24oz hunk of meat for $37).  Additionally you can get soups, sandwiches and burgers or a $5 kids meal.  Eva left feeling like a thumbs down was in order, but I have to admit, I was intrigued by the idea of a Pulled Pork Cuban sandwich on the menu, and that might be worth a stop the next time we are down that way.