It is hotter than fat people porking out here. 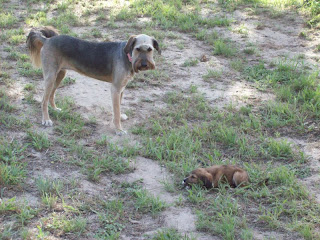 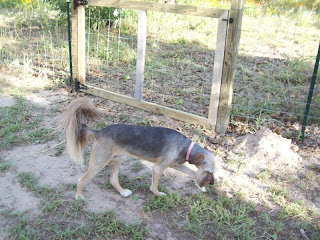 I spent several hours outside building a new gate so we could go between the house and the new lot without having to walk down the street or jump the fence.  It took me a  lot longer to construct because it was so hot.  I went through several bottled waters, a few bottles of Gatorade and a cup of iced tea.  But once you cut a hole in the fence, ya gotta finish the project.  Eventually, we will probably take down the fence between the two properties, but for now, it is too jungle like for the dogs to be venturing out there. 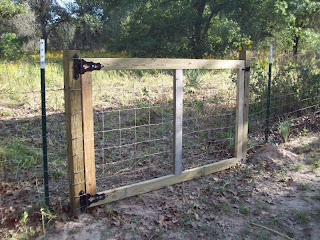 The gate is simple enough.  I just made a frame, put some metal corner reinforces on it, then nailed some field fence to one side and screwed some hinges and a latch onto the other side. We'll see if this convenience prompts Eva to walk out into the untamed wilds before the landscapers start on Tuesday.

Looks good, 'tho you might want to add a diagonal reinforcement piece or two to prevent sagging.