I had a short up and back for a meeting in DC on Thursday and as it turned out, our daughter Roxanne and I had the same flight from San Antonio to Atlanta.  We were able to get seats together and then share a quick lunch before racing to different terminals for our next flights.  So I'm not sure if we are both just incompetent, unable to read the monitors in the airport, or if it is that Delta likes to play musical gates, but we both went to gates we thought were the right ones for our connecting flights only to find they had changed.  At the first stop on the tram, we jumped off for a quick goodbye, then Roxanne got back on to go to the next terminal.  I texted her when I found out my gate was in a different terminal and she replied that hers was wrong too.  Like a scene from a movie, as I was getting back onto the tram, Roxanne was coming off and we passed once again.  It gave us both a giggle.

I heard a lot of people complain about Delta during the boarding process.  I have to admit, I prefer Continental and, don't be shocked, Southwest, but in general, the enemy of all air travel is stupid and inconsiderate people combined with the growing girth of Americans who fill the ever straining tiny seats on planes.  It has gotten to where most airlines charge an additional fee if you want the premium Aisle or Window seat.  I have an idea.  Why not increase the size of the middle seat by 2 or 3 inches so that it isn't such a nightmare for anyone who weighs over 125 pounds or has normal man sized shoulders?   I saw several big guys just stuffed like sausages in middle seats between two equally uncomfortable normal sized people on either side.  It is miserable for everyone.

The other big issue is carry-on items.  I'm not telling you anything you haven't heard before, but let's face it, this is a problem created by the airlines.  They now want to charge you $25 to check a bag, so the people who won't pay for a premium seat sure as hell don't want to pay to check the bag.  Add to that, you are allowed to bring a carry on, plus one additional item like a computer bag.  They never consider a woman's purse in that equation.  If you are in the last boarding group, there is zero chance that your luggage is going to make it into the overhead bin above your seat.

So I was seated (with my one carry on item under the seat in front of me) when a family of three adults comes on, all if them with at least 2 fully packed bags each, not to mention laptops and such.  They make the way to the back of the plane which, by now is completely full and start this unbelievable inventorying of the bins, suggesting that if they moved this piece of luggage over there and this back pack here, they could fit the first of their 6 items in this one.  Usually, it is the flight attendant who will take charge and start moving things around.  As they began rummaging through the bin above my seat, a man seated behind me started freaking out asking them to please stop and allow him to help them move his bag.  Don't get me wrong; I understand because I have had  jackasses try to force their roller-board into a bin where my laptop was sitting, and it just pisses you off.  But this guy went from trying to be protective/helpful to weirdly concerned, as if he had some nitro in his bag or something.

Long story short, it turned out that Mr. Nervous had three of his own bags up in the bin and he was just feeling guilty about taking up all the space.  The inconsiderate family finally had their items stowed throughout the length of the plane and we were able to depart for DC.  Like I say, I blame the airlines for creating this situation, but if most people are willing to abide by the rules, the airlines ought to enforce it at the gate.  When someone starts to board the plane with an ass-load of luggage, they just need to make them check it and be done with it. 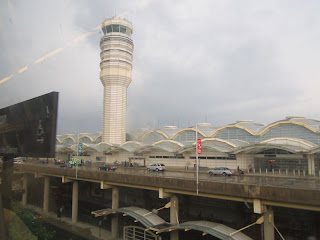 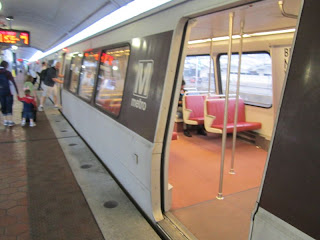 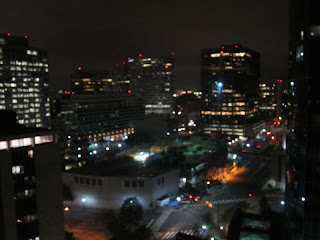 And speaking of hotels, I stayed at a Holiday Inn in Rosslyn.  The view outside my balcony at night was nice.  The only lights we see out here at night are the stars, so it was certainly an entertaining change of pace.  Frankly though, I think we'll stick with the stars.

I always have to simply suspend my imagination when I stay in a hotel.  I cannot allow myself to consider that the rooms are not totally steam-cleaned and magically sanitized from one guest to the next.  If I lay my head down on the pillow in a hotel, I want to be soothed into slumber with the aroma of bleach, just knowing that somehow or another, they are able to hose down and chemically neutralize all 4 pillows on the bed.  To think otherwise would just give me the creeps, imagining that the previous occupant of the bed was one of those really large unfortunate sweaty guys stuffed into the middle seat of the flight I was on. 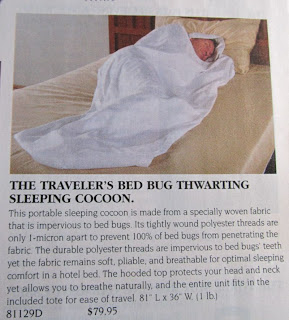 Skymall to the rescue.  Don't want bedbugs or hotel-borne cooties?  Get a sleeping cocoon.  You call it a sleeping cocoon, I call it a fart-sack.  Honestly, you should wear one of these onto the airplane because you just know those seats don't get cleaned all that often.

The good news, I made it back home and now I have a 4-day weekend to unbreathe  all the hotel, Metro and airplane air I took in.  Wish me luck.

I could not agree more. If the airlines had started charging for carry on luggage instead of checked luggage the boarding process would be faster and easier.

On the subject of airlines, if you ever have the chance (most likely if you're in Europe) take KLM. I took it from Barcelona to Oslo, with a stop about halfway in Amsterdam (each segment is about 1.5-2 hours). I didn't expect food. Well, not only did we get two sandwiches, but we had unlimited drinks, alcoholic or non, and cookies and tea or coffee. on BOTH flights. It was wild. And they were so damn polite. In fact, on most airlines in Europe they are. They just do things better... Flight attendants and staff in airports tend to be miserable in the states. Though I agree that Continental (well, now United) are one of the better ones.

I haven't been on a plane in...30+ years..not in any hurry..but I always loved southwest..

I wear a size 56 coat. Always try for a window seat. Seated on an aisle, everyone bumps against my shoulder. Middle seat is misery for everybody. Unless I must fly, I drive.