I don't think it is an exaggeration to say that we live on the edge of a desert out here.  Add to that, just living through one of the worst droughts in years, you wouldn't be surprised to hear the crack of a falling tree from time to time.  As you drive through our neighborhood, you can see that most of the properties have lost at least a tree or two.  We have been fairly lucky in that regard.  Until now.

Last night we woke up to an incredible unexpected thunder and lightning show that went on and on as if someone parked the weather right on top of us.  No complaints at all, by the way.  We'll take what we can get, even if the counting of seconds between the visual of the lightning bolt and the actual clap of thunder is entirely too short for comfort. 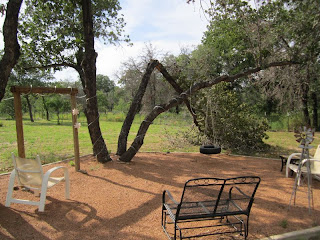 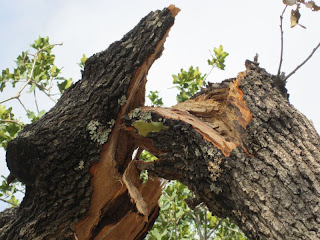 I don't think this storm would have been enough to help one of the trees on Gracie-Land, our small island with a baby swing and glider.  The weight from the top combined with the fact that these oaks seem to lean off to the side anyway; when it is just too dry, they snap.

I have no idea when this tree broke.  When I left for work one morning, it was too dark for me to notice, and we certainly didn't hear it fall.  I guess that solves that question.  If nobody is in the woods to hear a tree fall, apparently, it does not make any noise.  Either that, or our house is really good when it comes to soundproofing. 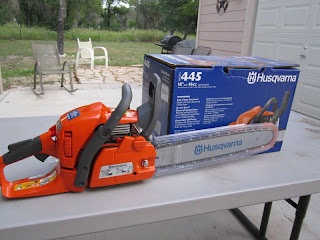 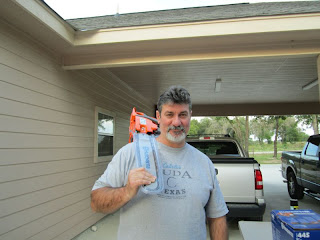 Of course, because Eva likes the show AxMen, and we have the entire property next door that will require some serious attention, she found a suitable anniversary gift that could be put to use right away.  If you are counting, this makes 5 chainsaws that we have now.  One for every occasion I suppose. 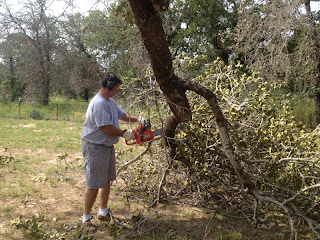 I am clearly not an ax man - just ask my foot after I managed to land a huge limb directly onto the top of it just the other day - thankfully nothing broken aside from my pride.  Regardless, with the right equipment, I can still make quick work and another addition to the firewood pile which is probably filled by now with scorpions, spiders and little snakes. 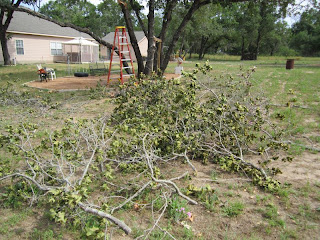 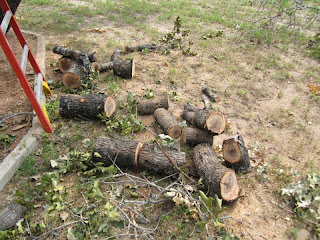 After removing the smaller limbs from the main trunk that fell, the log is cut into firewood for later use and the rest of it goes to my burn barrel.  The burn ban has been lifted, but I have learned that the wind around here is really unpredictable so for a small job like this, I just as soon stick to the barrel. 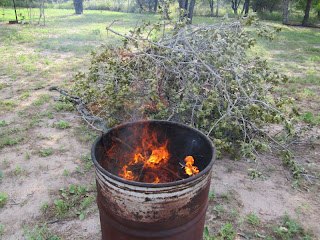 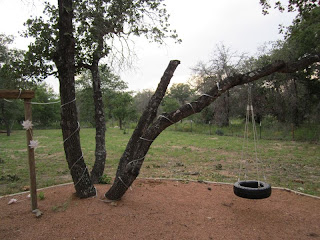 Within an hour or two, things were back to normal but our little island is not quite as shady as it once was.  Let's hope for more random storms like the one last night.  A few inches of rain here and there can't hurt, and the trees out here are really needing some love.

Be very careful with the blackjacks. Those are the oak trees with the very dark, almost black bark. They have a bad tendency to blow over easily. In fact, if you have any within falling range of your house, you should probably just go ahead and cut them down to be safe.

I've seen many, many of them blow down in storms throughout my life, and since moving to where we live now, I've had two go down across my driveway.

Yep - so we've heard. When we first moved in, we hired some guys to come out and do the initial clean-up of the property and they removed those blackjacks that might be a danger to the structure.

We have another one in the front that I am proactively dealing with because it looks dead and I don't care to have it land on the fence. If I can get it down without severely injuring myself, I think we'll be good!

We got 2 large oaks that died on my property...I think this actually affects our resale value. Such a shame.

Love the pic of you shouldering the new 'toy.' Lumberjacking it up... the beard helps too. Nice post.