So, I've been a little per-occupied recently resulting in a lack of posts, but not to worry, I usually recover quickly with some deer to post or some food to tell about.

In fact, just in case you were wondering, we did eat lunch at the new Saltgrass they opened over by Ingram Park Mall.  This is in the location of the old Bennigan's that sat next to Texas Road House. 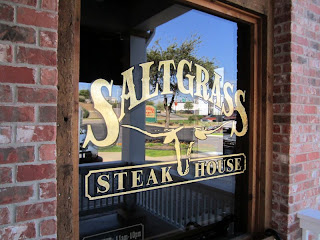 In spite of the fact that we were seated in what seemed like the middle of an aisle, causing waiters to scooch between us and a huge table of diners, it was good. 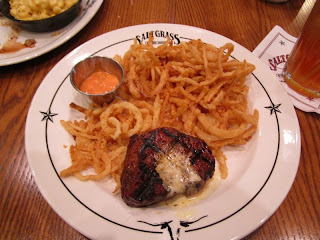 We both had steak and it was a relief that it wasn't crap.  Not as good as mine, but certainly enjoyable.  My only complaint was that I had no idea the steak comes served with onion ring like things.  So when they asked me for my side, I asked for onion rings.  What I got was a steak with a huge pile of onion rings.  Excuse me for not having a full understanding of the menu.  Anyway, it was good and we'll probably go there again.

I felt the earthquake yesterday evening as I was resting comfortably in the recliner trying to get through an episode of Tosh.0 from the DVR.  I get the humor from a 12 year-old boy mentality, but Eva thought the whole thing was quite stupid.  And she thought the earthquake was thunder.  If you have no idea what Tosh.0 is, it is a mix between America's Funniest Home Movies and The Soup.  This guy, Daniel Tosh, plays videos found on YouTube, then makes amusing comments about them.  When somebody does something really stupid, he'll invite them on the show to do a redemption (a remake) of their video with his help.  Unless you are 12, or goofy like me, don't scramble to locate this on your TV Guide. 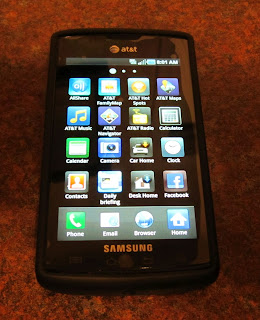 I have been having some serious issues with my Android phone as of late.  In short, for something that is supposed to be like a portable computer - (smaller than a laptop or an iPad), it has recently only been good for making phone calls and receiving text messages.  I don't like to talk to people on the phone, so really, all I have wanted to do with it is notify friends via Facebook that I have arrived at a restaurant, display a picture of a burger or occasionally post a picture of something funny I see.  If you can't do these simple things, why not just have a phone like my friend Gus, consisting of two cans attached by some string?

We ended up at the AT&T device repair center over by North Star Mall, and in 20 minutes or so, the nice lady had completely fixed the phone for free.  Oh sure, now I have to go back in and set-up all my accounts and such, it is no longer a paperweight.  My free advice to you:  Upgrade the firmware.  I guess I must have been negligent.  Plus, the free anti-virus software I loaded on the phone and the security software that works like a LoJack for your phone was actually working against the Android software.  In short, I screwed myself.  But it works now. 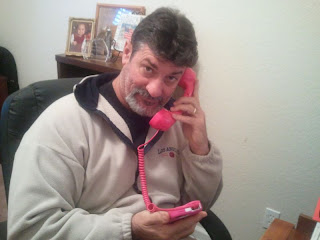 And in May, I'll swap the Android in and move to the iPhone like Eva.  Mine will be black though, not pink like her's.

While I was waiting for the AT&T lady to do her thing, we walked into Sam Ash, a music store nearby.   I am currently working on a project that will involve narration over video.  I have one of these regular $4.00 microphones used for computers but I wanted something with a little more quality.   Turns out that Sam Ash has a section for equipment like that.  We talked to a nice young man named Eduard who showed us a few microphones, but I mentioned to him that I had seen a "Podcast in a Box" sort of set-up.  A microphone complete with software for recording audio and producing a finished product. 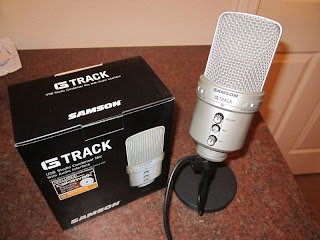 Eduard directed us to the G-Track, a quality microphone that comes complete with recording software from Cakewalk called Sonar-LE.  I had this idea that I would go home, plug the mic into the USB port, load the software and begin speaking into the microphone and have a finished product in a few minutes.  Turns out, this is not a child's toy.  Apparently, if you are not already a highly trained professional broadcaster, you have to read the instructions and watch movies on YouTube to figure out how to make it all work.  Seriously, the software gives you the option for adding violins in the background of your vocal track.  I'd be happy to just be able to record "Testing, one, two, three" and have it play back to where I can hear it as proof that it worked.  Until then, it is a very nice, $160.00 paperweight.  But at least my phone works.

So today is the big Superbowl game.  I don't like the Patriots for two reasons:  First that coach, Bill Belichick just gives me the creeps.  No offense to Patriots fans.  Also, Tom Brady is entirely too talented, too good looking, and too damn lucky to also get to go to so many Superbowls.  Therefore, I hope the Giants win.

We are going to try some recipes Eva found by watching Rachel Ray.  She hates the sound of Rachel's voice, but copied down some ideas for healthy Buffalo wings and healthy stuffed jalapenos.  We'll watch the opening acts, watch for some good commercials (though we have seen a lot of them on YouTube already) and then we'll watch whatever normally comes on Sunday nights.

So there you have it - I think we are caught up.  Enjoy the game and enjoy the day.