It has been a while since we worked on any kind of project around the house.  Planting bushes, installing additional sprinkler systems and such probably doesn't count.  Yesterday, I added some lights to the front of our garage (which technically is a shed since we have never had any intention of parking vehicles inside of it).  We do have some exterior lighting on the house, but because of the angles involved, I never felt like I had good lighting suitable for when we grill in the evening. 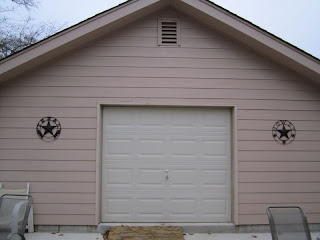 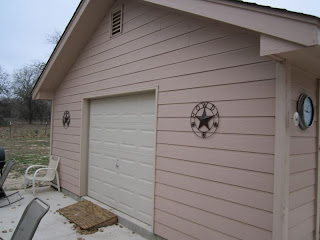 So this is what it looked like without lights.  I was really concerned about making sure that everything was installed in a symmetric manner, and thankfully, the guys who framed out the garage were smart enough, and good enough to provide correct spacing of the studs outside the garage door frame. 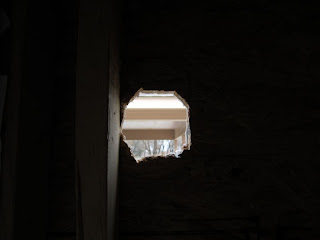 I'm a huge fan of measure twice, cut once, but in this case, I really measured multiple times hoping that I wouldn't jack it all up.  The big issue was cutting the hole through the Hardi-plank siding.  For those not familiar with the product, it is a cement-like product, so you don't just whip out a jig saw and start gutting. 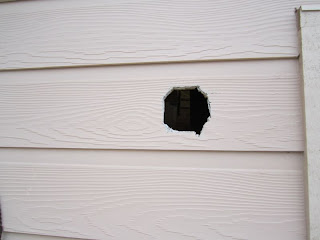 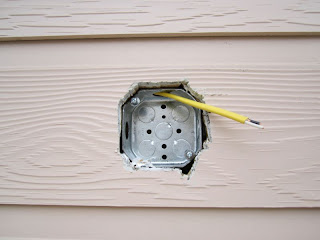 I'm embarrassing myself  by showing these pictures because I hate when stuff looks like crap, but the good news is, the plates of the fixtures cover it all.  The reason it looks so jagged is that I went through four or five really cheap Masonite blades on my saws-all, and to get the holes started, I had to drill several holes into the Hardi. Long story short, the holes were the hardest part of the project. And hopefully I didn't breath in a bunch of toxic dust into my lungs. 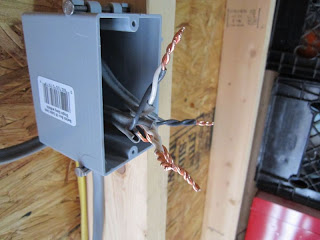 With the holes cut and the electrical boxes in place, it was time for some wiring.  Since I did all the original electrical work on the garage, I knew that I have enough open breaker space to easily add in more lighting.  I opted to connect into a separate circuit rarely used for anything else. I added a single gang box so I could run a switch to the the location of the overhead interior lighting switch, and to provide power to the two new exterior fixtures.  That's why you can see black and white wires connected together - they are going to the switch. 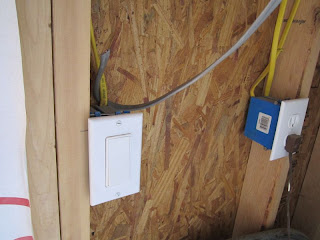 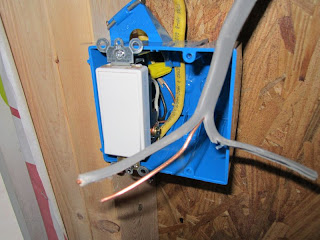 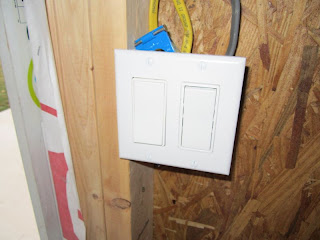 From there, I removed the single gang box on my overhead lighting and replaced it with a two gang box and wired up the switches.  I have all my receptacles set to where eventually I can sheet rock the walls and they will be flush. 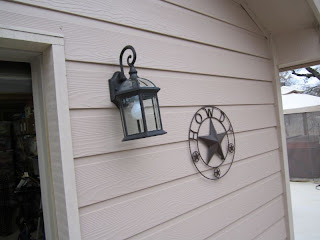 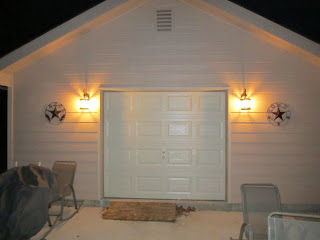 Finally, the installation of the fixtures outside.  Eva had originally wanted the design that has the star (like Texas) on them, but Lowe's was out.  Rather than drive all over creation looking for them, we opted for the second choice, and I like them.  And of course, the most important thing is, you don't see how jacked-up the holes behind the lights are. 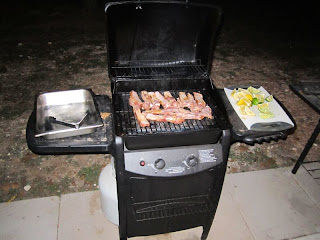 You simply would not believe the difference this small amount of lighting makes for this patio where we do our grilling.  I can't tell you how many times steak or fajitas cooked a little too much because I was standing there with a flash light trying to guess.  And just to test it out, I grilled some awesome ribs on the gas grill.  Yum!
Posted by Dave at 9:54 AM

Email ThisBlogThis!Share to TwitterShare to FacebookShare to Pinterest
Labels: Lowe's

How do you like that hardiplank? I'm thinking of using that instead of stone (to save money) for my cabin. I have installed it before on a house (habitat for humanity) and it was easy to set up, but the toxic dust...oh my.

Thanks, Sharon - and the ribs were delicious!

Hardi Plank: I love it. I had our old house re-done using Hardi siding and when installed right, it looks and works great.

If stone or brick on all 4 sides is not an option due to cost, at least use Hardi over vinyl or fiber siding and you will be glad you did a decade from now.

Just to be clear, I meant Hardi instead of vinyl. I didn't mean to imply you should first put on vinyl siding, then cover the siding with Hardi!