We are no doubt gluttons for punishment. 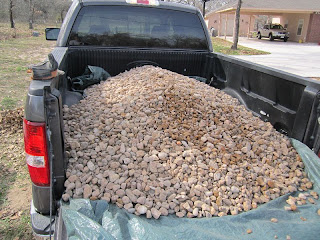 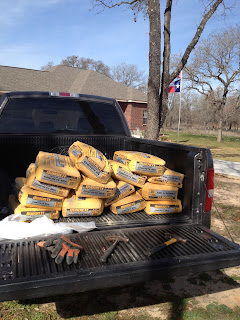 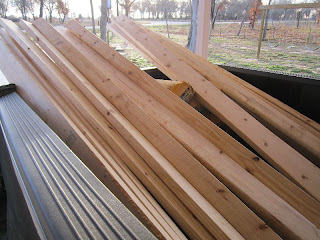 In a single day, we built 90 feet of forms, mixed 18 bags of Quickcrete, unloaded 2 yards of river rock, moved the Texas tub around several times, and ate some nachos. 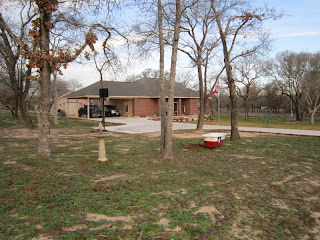 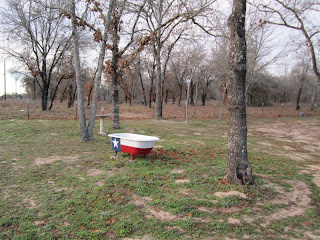 As with most of our projects, we really only have an idea of what we want, get a rough estimate of the size so we can speculate on the materials needed and once started, we just play it by ear. And that keeps it interesting.  It all starts with an empty space that needs something.  For this project, we have some trees towards the front of the yard on the side that still has no grass.  As you can see from the pictures, we threw some random objects into the yard (a bird bath and a tub) just to do something.  Of course, this just makes more obstacles when you want to mow the sand and weeds, so we needed to do something about it. 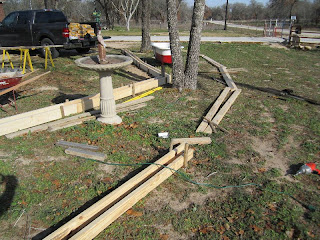 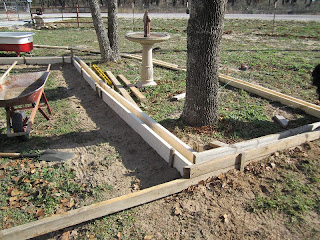 As we are huge fans (obsessed might be more descriptive) of little cement curbs, We decided to close in the area.  Eva had this vision of a higher curb on the backside of the project so the rocks on the inside could form a sort of slope down.  I'm not sure if that will be the affect we get, but I used 2X6's along the back and 2X4's in the front. 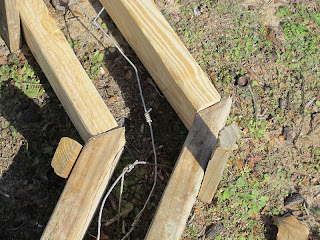 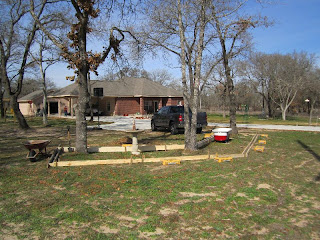 The design was fairly simple requiring a minimal number of cuts.  Based on an outline of the footprint of the trees, it actually looks like a flying wing or some sort of wide V shape.  That wire inside the forms is some old fencing we cut to use as cheap re-bar.  Nothing but the finest construction out here. 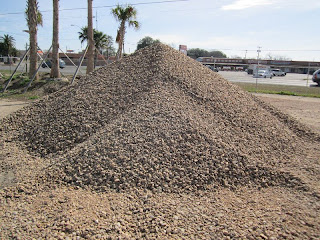 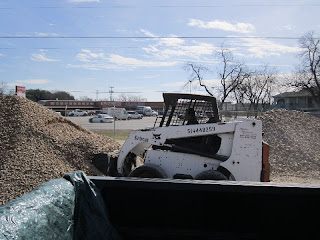 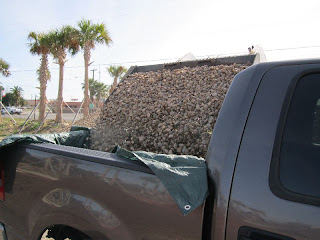 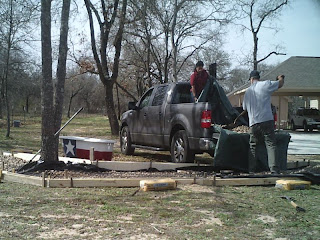 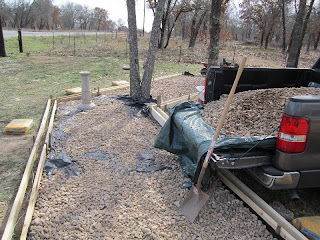 The materials place where we get rock is just a few minutes away in Lytle.  It is also the same place I get the oil changed, by the way.  Nice folks.  They close at 2PM on Saturdays, so instead of starting right away with the cement work, we decided to get the rock. We put a 4mil black plastic down to keep weeds from growing through and then shoveled 2 yards of river rock inside the framed area.  Every muscle is feeling it! 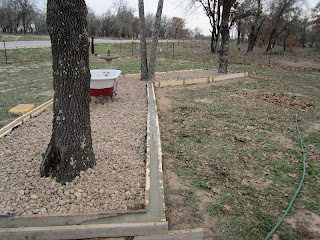 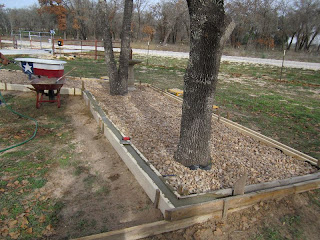 If we were smart, we would have called it a day, but we wanted to get the cement mixed and put into the forms before dark.  Eva and I have developed a system now that we have produced hundreds of feet of curb over the last year.  I mix the cement a bag at a time and shovel it into the forms, then she uses the trowel to make it look good. 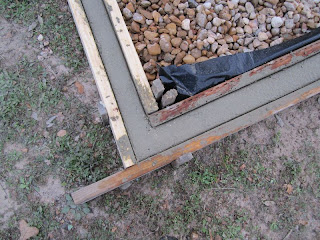 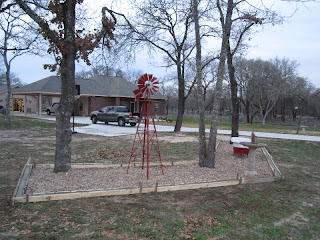 Repeat the process for the next 17 bags, and you are done.  At least until the next day when the forms can be removed. We started the project at 9AM and with the exception of breaks to go purchase the rock and a few more bags of Quickrete, we worked non-stop until almost 6PM. That's how we roll.

Of course, later today we will remove the forms then start the process of  filling the area with assorted plants and decorative clay pots and such.  Overall, this was a good project and I think it will look nice when complete.  And, it just made the weed eater action in that area a lot easier.
Posted by Dave at 8:39 AM

Email ThisBlogThis!Share to TwitterShare to FacebookShare to Pinterest
Labels: Yard

Wow, you guys did lots of work. It's okay if you eat the nachos because now you actually can burn it off:)

Glad you laid down some weed barrier before the rocks were placed. For some reason lots of people don't do that and they end up paying for it with weed problems down the line. It's such a simple thing to do.

Oh, a question...do you prefer a 4 door pickup truck like the one you have or do you wish you went with a 2 door so you can get more bed space in the back for hauling stuff?

Glad you laid down some weed barrier. Yea, we've learned that lesson a time or two at our previous house.

do you prefer a 4 door pickup truck? I definitely do. It would be different if I only used the truck for home projects, but it is also my daily driver. I have found that I can easily haul 4X8 sheets of plywood, 2X4's and such with no problem. Trying to carry 16 foot boards is a different story and takes a little more effort. But in general, and for my needs, the four door is the way to go. Eventually, we plan to buy a trailer so if I need to haul my mower somewhere, or get a huge load of lumber or materials, I'll be able to use that.

*gasp* There is not a picture of the nachos.

Nice job on the yard, though.

All this work will pay off and then you will just sit back and enjoy the view! Can't wait to go have a look!
Lydia

Next actual vacation I have, I am going to invite myself down and be a hired hand for one of your projects. This looks like so much fun, especially the BBQ part. M m m!

Sharon I have your room and vittles waitng for you whenever you decide .