We had seen the brightly colored trailer parked at a few different locations some time back, then it ended up parked with the end butted up to a small building near Brown's Grocery in Natalia.  And like a lot of the places we wait and wait and wait to give a try, every time we found ourselves driving through the heavy Main Street traffic of Natalia, we would comment on the need to stop in and see what all the excitement was about.  And now we know. 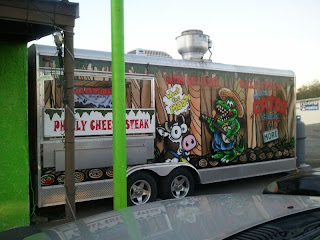 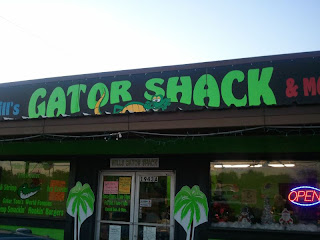 I came home from work unusually early today which threw Eva's planned dinner menu off kilter, thus the need to make alternate accommodations.  The Gator Shack it would be! 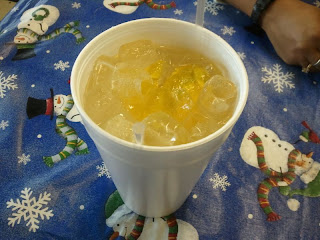 Inside, we found several tables and a handful of people who may or may not have been employees, playing a hand of cards or just catching up on the latest gossip.  Our waitress quickly offered menus and took a our drink order.  How could anyone pass up on the freshly squeezed lemonade?  Simply delicious.  Now, I feel like a cheapskate for not ordering two of the 32 ounce servings, but Eva didn't want to get bloated, so we got one cup, two straws.  Part of the treat was sitting there watching the lady make it for us. 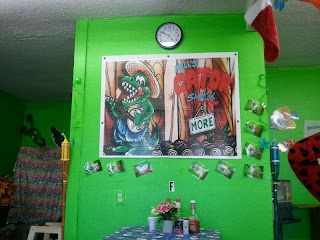 I mentioned that the place is small.  You'd be hard pressed to fit more than twenty folks at a setting, but after talking with the owners, it seems that they'll be moving locations a few doors down into a bigger place by the end of the month.  Hopefully, it will leave more room for the Karaoke Night the offer up weekly.

The menu had a selection of fried delights including gator, which the owner offered us a large sample of just so we could give it a try for our first time there.  Good stuff, obviously marinated and fried up perfectly and presented with his own dipping sauce.  Sorry, no time for a picture, but trust me, it was good. 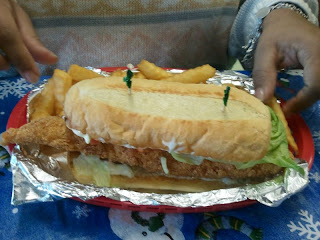 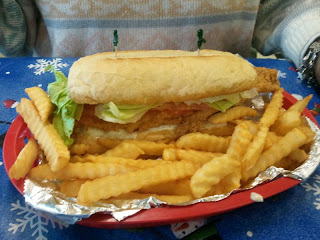 The big winner of the night was the fish sandwich Eva ordered.  Served with lettuce and such, this huge fillet was nicely fried with a lightly seasoned thin crust and served on a grilled bun.  It was supposed to come with chips, but the cook/owner completed the order with crinkle fries.  Of course I had a taste, but Eva wolfed it down just as I pulled my fingers away from danger. 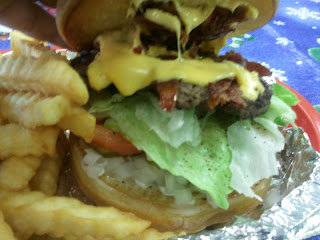 Sorry about the crappy picture, but what you can see of my bacon cheeseburger should tell you that it was made with a hand packed patty served with crispy, thick bacon and all the standard fixin's.  After I finished and told her it was great, the waitress said it would have been better with the jalapenos.  My bad.  And yes, don't tell my cardiologist, but that is some real mayonnaise slathered on the grilled bun there.  Is it a wonder I'm so fat?

As we were finishing up, we chatted with a group of just really friendly folks and talked a little about the plans for the new Gator Shack when it moves down the street.  As we were leaving, the restaurant began to fill up with people coming in for dinner, probably ordering some fresh lemonade and getting their Gator on.
Posted by Dave at 6:57 PM

Ooh now you've got me hungry! I'm jealous of that bacon cheeseburger! :P

The homemade lemonade and the gator sound scrumptious together! I'm pretty jealous, but at least I have a trip to Anaheim coming up, and at least one In & Out burger visit lined up. No better burger, for real. And leave us not forget Polly's Pies. I'm planning on disembarking in Chicago and walking the rest of the way home to new Canaan, just to work my way back to pleasantly plump.

@Jessica: It was good stuff!

@Sharon: In & Out Burger. I think they keep threatening to build some in south Texas, but I'm not holding my breath.

I'm not familiar with Polly's Pies...

I work at the Gator Shack and everything that was said was true. Our food is better than great and I can assure you that you won't go away hungry. Just wanted all of you to know that we have moved to Devine at 410 Hondo Ave (hwy 173) and share the same roof with Pat's Drive Thru. We are looking forward to seeing all of you!!!