The Brush Pile is Gone...

Well, the stars aligned, the wind cooperated, and the constant afternoon drizzle made for a perfect day to burn the pile down! 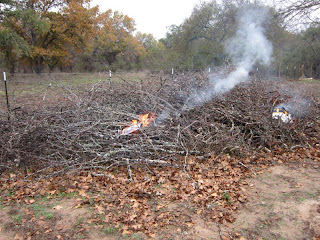 We had heard from our County Commissioner (Jerry Beck) that we could get a permit to allow burning even though the burn ban for our county was still on.  By the time Eva went to the county office to get the permit, apparently, the ban had been lifted!  So, with everything coming together like clockwork, I tossed a few matches onto some empty cardboard boxes and got the party started. 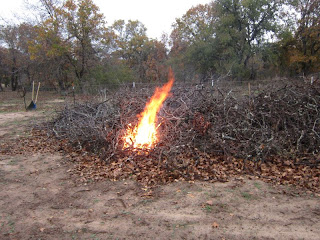 With the rain coming down fairly steady, I ended up having to grab some lighter fluid and a few dozen matches to really get things going, but let me tell you, once it starts, it would take some serious rain to really put a fire of this size out. 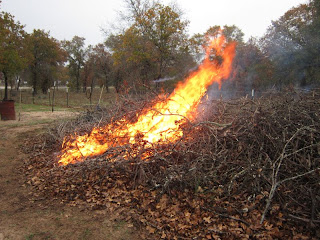 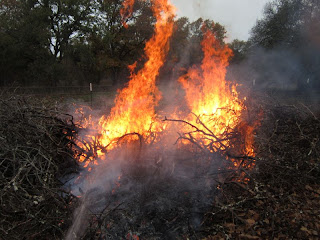 I think it was about this point when I decided I might want to start taming the edges with the water hose.  I do have neighbors, and I get the feeling that they'd just as soon not have my fire on their property. 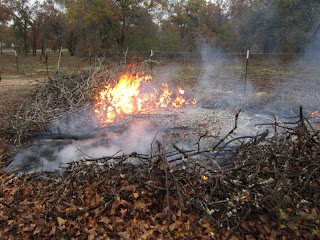 This pile of brush has caused us a great deal of anxiety for some time.  We've kept the area around it free from leaves and such fearing an errant lightning bolt might spark things, and the last thing we wanted was the rest of the place catching fire.  Of course, an errant lightning bolt could torch anything I suppose, so maybe we were just paranoid of the drought and the dry pile of branches in our yard. 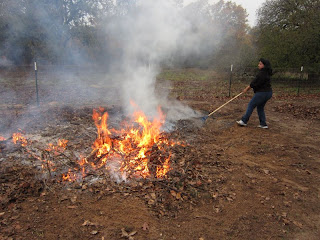 The other thing we were slightly concerned about was the possibility of a mass exodus of small critters and snakes once the fire got going.  Can you imagine Eva doing battle with retreating rodents, spiders and some snakes all freaking out?  Thankfully, no varmints were harmed during the burn, which surprised us to be honest. 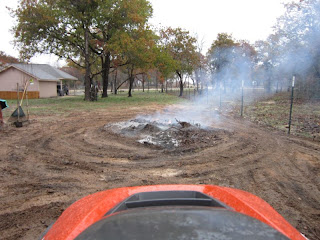 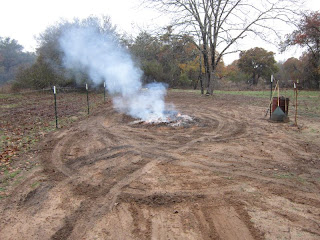 After a while, we were able to start moving the pile in toward the center to keep a good burn going.  I busted out the lawn tractor and started pushing the pile in even closer.  Eventually I will level off this area and we can throw down some grass seed and see if it takes. 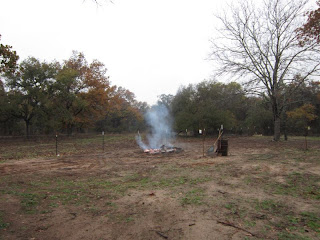 After just a few hours, the pyromaniac in me was pretty much burnt out, and we both smelled pretty smokey.  I let it smoulder for another hour then went ahead and sprayed it down for the night.  The pile is gone, finally,  and now we can contemplate the next chore to tackle.
Posted by Dave at 8:16 PM