Saturday morning we had the urge to make a few purchases at the Tractor Supply and instead of going to the one in nearby Castroville, we opted to drive right into the rain coming our way and got to the TSC in Pearsall.  Driving 25 minutes in the other direction tends to bring on an appetite, so we drove into Pearsall, the town (as opposed to Pearsall, the exit off of I-35) and look around. 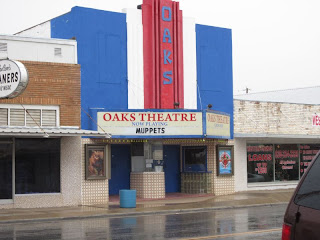 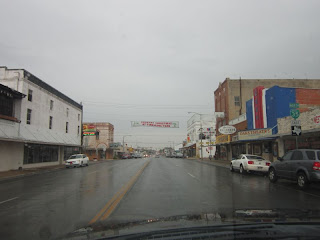 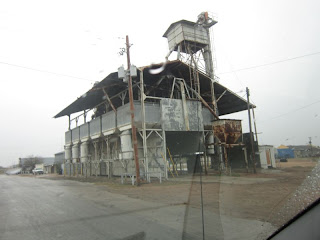 We had never actually driven into town so it was nice to see the old buildings and businesses along the way.  In spite of the rain, I could easily see some good shooting locations for a movie based upon a small town.  I love that old theater, even if I don't care for the paint job. 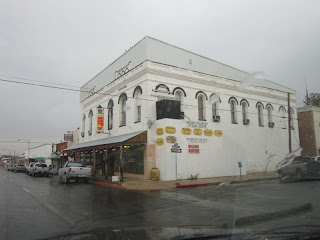 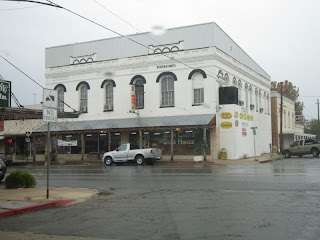 One place that really caught our attention was directly across the street from where we would dine on breakfast, and that was Brush Country Steakhouse.  If we had not already been planning on steak for dinner, we might have gone in for an early lunch like the steady flow of hunters we saw going in for a feast.  Perhaps another time. 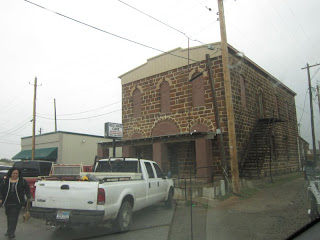 We drove around the town looking to avoid the standard taco place, though we are obvious fans of that fare, and came upon a place called the Rock House Cafe.  We probably would have stopped in, but I need a place with windows. 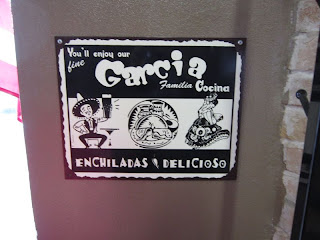 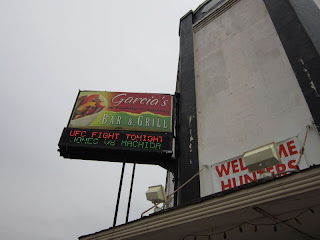 A few streets up, we saw Garcia's Cafe which is co-located with Garcia's Bar & Grill.  There was parking in the back next to what was either the police station or just a bunch of parked police cars, so I felt like it was a safe bet. 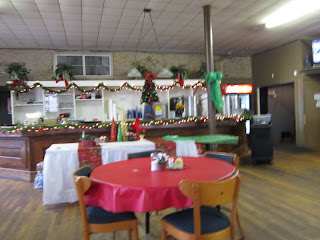 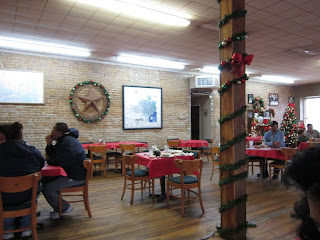 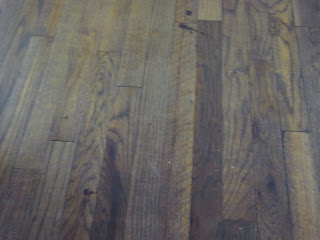 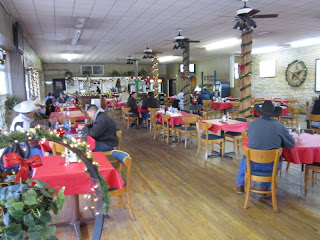 I get the feeling Garcia's is not that old, though the building has clearly been around for years.  Inside, it is wide open seating with this beautiful wooden floor and a huge oak bar at one end. On the way in, we noticed an exterior entrance to the bar upstairs and there was in interior stairwell.  I suppose later in the evening, people eat dinner then go upstairs for drinks and whatnot. 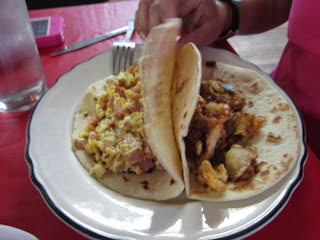 Eva ordered some tacos that turned out to be pretty good.  They offer a Spam & Egg which, everyone knows is a good snack.  She also ordered the potato con chorizo, both on flour.  There was nothing overwhelmingly special, the flour tortillas were packaged, not homemade, but the quality and taste was excellent. 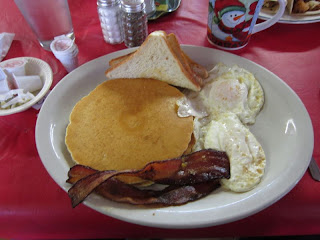 I went with the more traditional pancakes and eggs with bacon.  Awesome, thick bacon, eggs cooked over easy the way I like them and even the toast was good.  The pancakes were not that great.  Oh, I ate them, but they just weren't perfect, and they had almost a taste of corn.  Eva always puts a dash of vanilla in her pancakes, so perhaps I'm a little spoiled.

With coffee, our entire bill was under $10 which I'd say is mighty fine.  Clean bathrooms, service with a smile, and good vittles for a low price.  Not bad at all.

This seems strange to me, but I don't think I have ever been to Pearsall. It looks a lot like Nixon, though.

Interesting. I don't know that I have been through Nixon, though if I were to go, I would hope to find a statue of Chris Marrou.

I'm pretty sure they don't have one. The best thing about Nixon is the city limits sign in your rear-view mirror.

The Accidental Somebody said...

Isn't Marrou a judge in Natalie? Not nixon.

Isn't Marrou a judge in Natalie? Not nixon.

Actually, he is a Municipal Judge in the small town of Von Ormy, a small strip of I-35 that I drive through at least twice a day. I mentioned Nixon, because that is where he and his brother, Andre, a former presidential candidate (of the US, not Nixon) were born.