I'm just going to have to get this out of my system right now:  Mulholland Dr. was quite possibly the worst movie I have ever seen.  I was somehow lured into purchasing it from Amazon when a friend posted a link to this incredible scene from the movie on FaceBook.
Okay, as beautiful as that is, there is really no further reason for you to even watch the movie.  Yes, yes, we do see Naomi Watts nekkid, but if you really need that, I'm sure Google is your friend.

Look, people often laugh at me because of my taste in movies.  I proudly admit that I enjoyed Lost In Translation.  I still think that one of the most brilliant movie plots ever put together was It Couldn't Happen Here by the Pet Shop Boys.  I know what it means to have to try to read the mind of the director and decipher symbolism and all that stuff.  But good Lord; David Lynch, please refrain from smoking a pound of dope before you make a movie.  I actually had to search around the Google to find an explanation for the movie.

So let me save you some time.  The first 2 hours of the movie are a complete dream sequence.  Everybody you see is probably not who they really are.  Think Wizard of Oz here. Naomi Watts is an actress named Diane Selwyn, but for the first two hours, we know her as an actress named Betty.  Laura Harring is an actress named Camillia, but for the first two hours, we know here as Rita.  Diane and Camillia are lovers.  Betty and Rita are lovers.  There is an extremely weird homeless man who lives behind a dumpster.  He looks like Cousin Itt, and holds Pandora's box.   There is an old married couple who seem a little too happy.  A blue key opens the box, a hit man seems fairly incompetent because as he intends to kill one person, he ends up having to kill several people, and there are two LAPD detectives that seem to have solved the entire mystery, though we only see them in a single scene in the movie.

Confused?  I promise you, this is a much more coherent explanation than sitting there and actually watching the movie.

UPDATE: I got a note from Rebecca at Artsy.  She asked me to link to the David Lynch page. Check it out!

We met friends for lunch down at Luther's on Saturday.  It was a great visit and even this morning, Eva is still raving at how wonderful her bacon cheeseburger was. 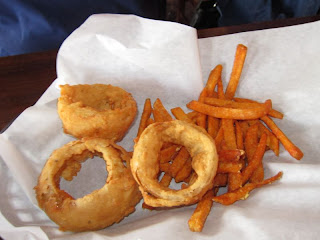 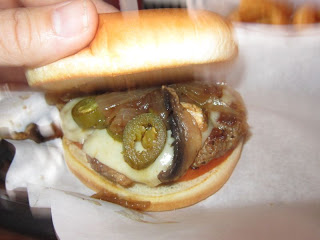 I had a mushroom Swiss burger with grilled jalapenos.  Good stuff!  And look at the size of the onion rings.

The other morning I drove down to Devine to grab some donuts and kolaches to take into work.  There is a new place that is a combination donut shop and chicken emporium.  I don't recall the name, but it is on Highway 173 just west of I-35.  Seriously fresh!

Anyway, just as I was headed back east on I-35, I was roaming through the radio stations looking for something to listen to and I happened upon something at 105.9 FM or there about.  I had never heard the station before, and as I moved closer to San Antonio, it was over powered by a Tejano station on the same channel, so I have no idea what the call letters are for sure, but it may have been KAHL.  Not important.

It reminded me of my recent dilemma, and that is, what should I listen to on my short 28 minute drive to work every morning?  I used to have this really weird rotation of 1200 WOAI, First News with Charlie Parker, then when he talks, switching over to 99.5 KISS with Lisle & Hahn, then when they play a song or go to a commercial, switching to Tejano 107.5 for the Jonny Ramirez in the Morning show with Petersworth (formerly of the Drex show on KTFM (years, and years ago).  What has upset the apple cart is that KISS-FM got rid of Lisle & Hahn, and I can't stand to listen to Charlie Parker.

I mean no disrespect toward the guy, but he sounds like an argumentative loud mouth to me.  In typical radio banter, you can disagree with your co-host (in this case, Charity McCurdy), and still make it entertaining.  When Parker disagrees with anyone, it sounds like he is really ready to get in a loud shouting match over it.  I suspect that he means no harm, but it just comes across that way.  It is actually uncomfortable to hear.

So, I have actually been putting NPR's Morning Edition in my line-up.  When I was stationed overseas, they played NPR on Armed Forces Radio, so I am certainly familiar with the program.  I totally understand why some people feel that NPR should not be funded by the government.  First off, a commercial is a commercial whether it has a funny actors trying to sell the product, or some monotone dweeb reads it from a cue card.  NPR is full of non-stop sponsor announcements.  But that is not the point.  People claim that it portrays a political sway to the reporting, you know, like Fox News, and should therefore not be sponsored by the government.

So the first morning I listen while driving into work, there is this interesting story about the first guy who figured out that the earth was not flat and in fact, it rotated around the sun.  This was an interesting discussion on all the people of the time thought it was radical and even blasphemous.  The report was very well put together, well documented and it really showed how hard it was for Nicolaus Copernicus to go against the accepted view.  As Barney Stinson might say, "Wait for it..."

Of course,  the report concluded with NPR tying the entire earth is round naysayers into the fact that today, it is so hard for progressive scientists (like Al Gore) to convince uninformed nincompoops like the rest of us that Global Warming is the result of man ruining the earth.  Just don't get me started.  Yes the earth is getting warmer.  No, there is nothing mankind can do to make it get warmer faster or make it slow down.  And when the we start to progress to a natural cooling of the environment, man will be powerless to speed that up or slow that down.  Somebody, buy me a few carbon offset credits so Al Gore can pay for his mortgage-sized electric bill this month.

I know, I hate politics too.  All this because Lisle & Hahn got canned. 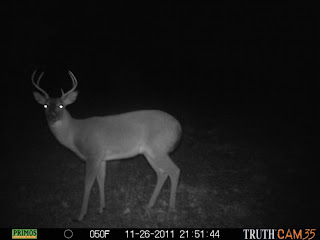 Enough rambling for a Sunday morning.  We have H-E-B Plus shopping to do and if the temperature can be globally warmed up to the 70's, I think there may be some yard work in my future.

I ran into the same problem when my usual morning radio show changed. I hate listening to arguing! I know the tone of voice you mean, and it puts me in a bad mood. That is no way to spend 35 - 40 mins. at 6:45. I started listening to books on tape (first cds from the library, now on my ipod). Now we have Sirius radio and I listen to a comedy station or something light.
Noreen

Do you remember Mason Dixon on Q105? That is my station of choice for music when I am getting ready in the morning, but I literally have to switch stations every time he starts talking about current events of any kind.
Noreen

Yes, of course I remember Mason Dixon. He is the one who told me I was not ready to be on the radio in a market the size of Tampa! I should probably thank him.

I really like the idea of the books on iPod, but just haven't made any effort to try it. I also have this I-Heart-Radio thing on my phone, so I could really just look for something else to listen to. We have Sirius equipped radios in both our vehicles, but I have never made the effort to sign up for the free trial that came with it.

Maybe I should just make a bunch of mixed-music CD's!

Pandora (should be an app) on your phone is good. You tell it who you like and it makes selections based on that. Sometimes it chooses wrong but you can skip through to the next song. The new 99.5 people start tomorrow, I think I heard. San Antonio radio blows, that is all there is to it. Dallas isn't that much better, but it is better.

On Mullholland Drive, cheesy Pete!!! The clue was the pink sweater. In the first part, it had sequins, and in the second part it didn't. Duh. I know how you feel, though. I still wake up on random nights, thinking I have the sequence of events in Pulp Fiction figured out. And then it's gone. It's that durn bandaid on the back of the drug lord's head. Did he get that before or after he went medieval on the other bad guys? Not to mention the body count in American Horror Show. Who' s dead and how do we tell? (Puliing another frustrated chunk oh hair out of my head.)

The Mullholland Drive clip is disturbing....

The Mullholland Drive clip is disturbing....

And that was one of the better parts of the movie.