We have an office in our house that allows Eva and I to sit and surf the net (do we still say that these days?) simultaneously while hearing the TV randomly increase in volume from the living room.  This is sort of a weekend ritual.  Me checking up on the blogs I follow, her checking up on Facebook friends and plowing imaginary fields on a cyber farm somewhere in the ether.

Not everything is equal in our office.  I have the larger 23 inch computer screen facing one wall (which I'm very comfortable with) and she has the smaller laptop screen, but she faces the window which provides a great view of the lot next to ours, complete with morning deer and a strict accounting of the occasional cars that pass by our house.  The surfing is occasionally interrupted by laughter - a funny comment by a Facebook friend which must be shared or a picture of some poor idiot doing something stupid caught and preserved forever on the Internet.

This morning, just as I got up to go refill my coffee, the sound of the blaring TV was interrupted by a loud, steady and firm, "GET YOUR FREAKIN' GUN!".  Of course my first reaction, having seen one too many episodes of Bordertown: Laredo, was that some members of the cartel were on our property and it was time to bust out The Judge!  In fact, it turned out that she was witnessing a gopher defile our sand before her very eyes. 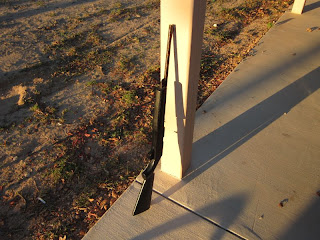 Sure as shit, the little gopher was popping up his head and if I'm not mistaken, he was looking at me.  Deciding the handgun might be slightly overkill, I grabbed the Crossman air rifle and immediately began pumping.  My goal was, one shot, one kill, of course.

Note to self: I need to spray some WD-40 on the back door hinges.  I think this may have given Mr. Gopher a clue that I was on the way.  Never the less, I arrived at the hole surrounded by a large mound and he no longer was popping his head out as freely as he was before.  For just a moment, I aimed at the top of the hole and was prepared to wait it out.  I mean, it wasn't two weeks ago that our neighbor up the street sat out in a lawn chair with a pellet gun and beer waiting for the perfect shot, so why couldn't I stand patiently for a minute or two?

Okay, I'm just not that patient.  I slowly moved into place and could see that there was a tiny flicker of sand coming from within the hole.  I shoved the barrel down and fired.  For good measure, I pumped the gun several more times and fired again.  No movement at all.  But I think this gopher is smart enough to avoid the efforts of  an impatient homeowner with new grass, so just to be sure, I decided to bring out the big guns.  No; not The Judge. 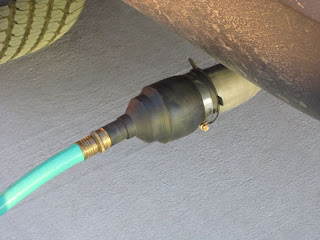 This is the device I purchased during the summer from True Value.  You connect it to the tailpipe of your car, then run a hose into the gopher hole.  I've always thought that if I were a gopher, I'd prefer this method of death over a BB to the snout. 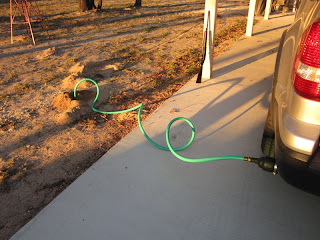 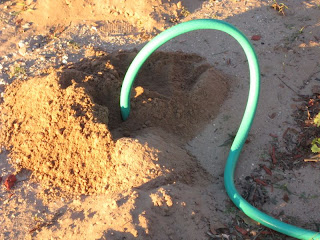 Once inserted about a foot into the hole, I packed a little sand around the hose to seal things up, then turned on the truck. Of course, as I let the magic gas do its work, I patrolled the general area, Crossman at the ready, looking for any signs that Mr. Gopher was looking for an exit strategy. 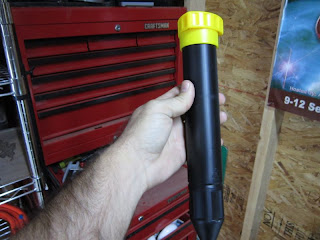 Lest you think I am a savage small animal killer, I will tell you that I have tried other options.  These little devils simply laugh at the poison pellets I drop down the hole.  My wife has been chewing mouthfuls of bubble gum, then spitting huge wads into the holes in an effort to cause the little guys to have a tummy ache.  And finally, we have installed these sonar devices that are supposed to keep the gophers from coming within 95 feet of them. 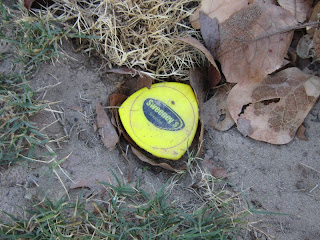 They emit this beeping sound about every 30 seconds.  The goofy thing is, you can actually hear it if you are within 15 feet of it, and of course, this makes dogs curious and want to dig it up to play with it!  Oh, and do they work?  Well, let's just say that yes, they have been somewhat effective, but we did have one pissed off gopher pop-up from its hole less than 6 inches from the thing.  So, I have succumb to BB's and tailpipe emissions to do the dirty work.

I'll let you know if I was successful or not.
Posted by Dave at 9:12 AM

Email ThisBlogThis!Share to TwitterShare to FacebookShare to Pinterest
Labels: Gopher