Probably one of the most excited sporting events I have ever been to, my son came down from OK City so we could see the inaugural football game for the UTSA Roadrunners, and it was an absolute hoot! 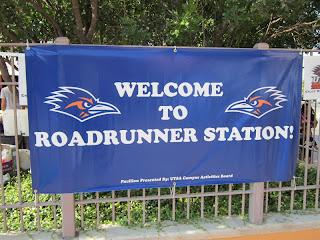 Prior to the game, we went to Sunset Station for what is being called Roadrunner Station on game days.  Lots of free stuff being handed out like it was sample day at HEB Plus or something.  We listened to several different bands, sampled sports drinks, ice cream and such, but opted to pass on the shrimp being passed out by the good folks at Sea Island.  It was pretty warm outside. 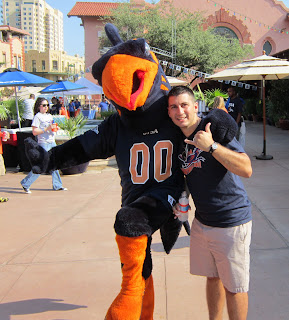 And can you imagine how hot it had to be for Rowdy?  My son, the one on the right, is a class of 2008 UTSA graduate, and loved the school even before they had a football program.  This only makes it better. 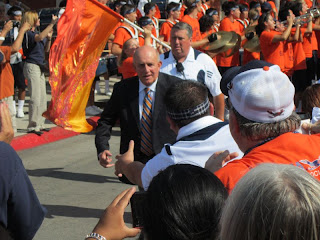 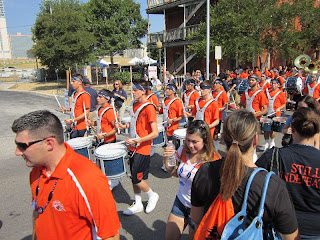 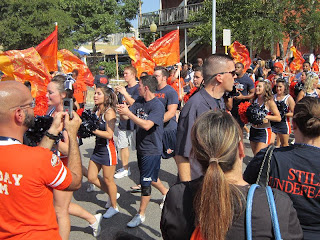 When the team arrived via bus at Roadrunner Station, they were led buy Coach Larry Coker through a huge crowd of appreciative fans, along with cheerleaders, dancers, and a huge UTSA marching band called SOSA or Sound of San Antonio. 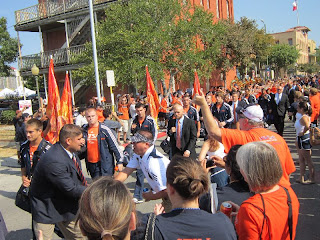 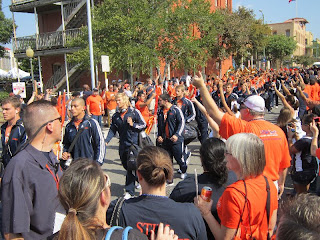 To us, the players seemed very small and honestly, they looked like they were shell shocked.  In spite of the festive atmosphere, I think the general feeling was that this UTSA team was just a few hours away from having their asses handed to them on the gridiron.  But let's not get ahead of ourselves. 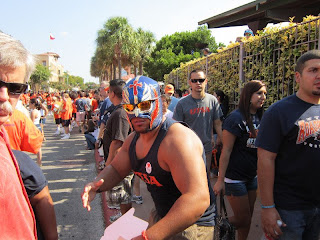 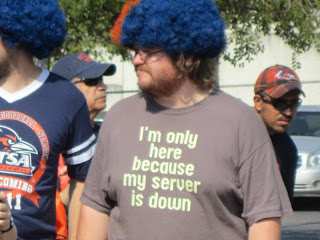 Within the crowd of excited spectators, numerous people had dressed for the event.  The Mexican Wrestler guy turned out to be very popular as we saw him several times happy to pose with other fans.  I don't know that anybody asked the blue and orange haired server guy to pose. 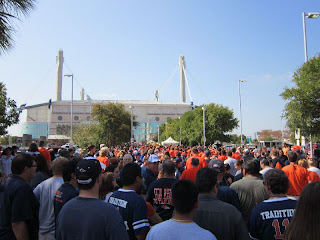 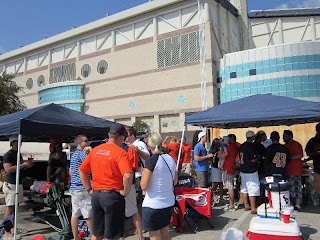 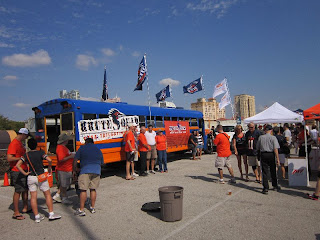 After the parade from Roadrunner station to the Alamodome, we walked over to the area where people were initiating what is expected to be a weekly event during home games - tailgating.  Two full lots were packed with happy tailgaters and several sponsored teams really went all out.  Somebody in the Alumni area gave us some awesome sausage wraps, which were muy bueno and appreciated.  I know you can't see it in the bottom picture, but posing in front of the bus is former SA Mayor Phil Hardberger.
Speaking of celebrities.  Once we were actually inside the Alamodome, we were making our way to our seats and I spotted retired Spur Bruce Bowen (a UTSA Alumn) walking with his kids.  I nodded to him and he nodded back - who knew he recognized me from this blog?  I liked the fact that people weren't trying to stop him and pester him for autographs. 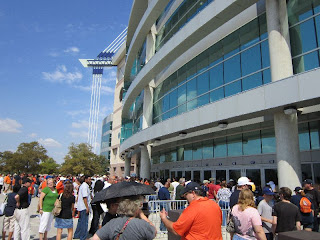 I did have one complaint about the Alamodome.  That is, they wanted people to come early to enjoy the pre-game events, but they did not open the doors to get inside in the air conditioning until exactly 11:30.  It is entirely too hot outside for that. 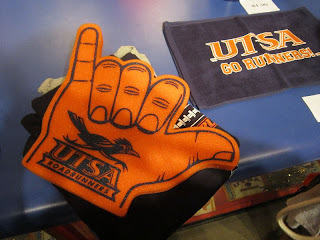 On top of that, by the time we stood in line to buy T-Shirts and souvenirs, hob-nobbed with sports celebrities, then got in line to grab a cool beer for the game, the festivities on the field were already getting started. 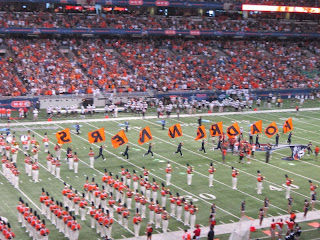 Once in our seats the atmosphere was simply electric.  People in San Antonio have waited so long for this and the excitement in the air was goosebumps-worthy. 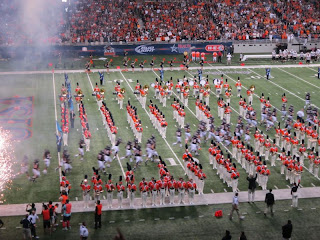 When the team took the field to explosive fireworks, the crowd welcomed them enthusiastically and the roar of cheers and applause was spectacular. 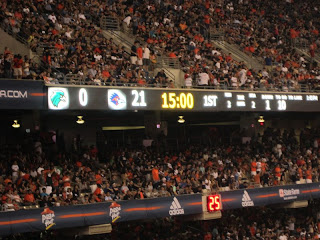 My camera doesn't do justice at any sort of distance so if you'd like to see actual pictures of the action, you can go to this UTSA page.  What I did capture was that after the first quarter, UTSA had a 21-0 lead.  My throat was and still is hoarse from yelling and cheering.  I actually mentioned to my son that we could leave then and there because the game had already been 10 times better than we could have ever expected.  The UTSA players who we seemed to think appeared small and somewhat nervous looking when they entered the dome must have been playing possum as part of a bigger strategy.  The offense scored on the first three drives, handling the crowd and cheers and the excitement of it all like pros.  On the very first defensive play, UTSA met the opposing offense in the backfield and truly dominated the Northeastern Riverhawks almost without exception for the remainder of the game.
When the announcer reported to the attendees that we had broken an NCAA opening day record for new programs with just under 57,000 fans, the crowd roared with excitement. It really was impressive to see San Antonio come out and surpass the previous record held by my now second favorite college team, South Florida (Go Bulls!) 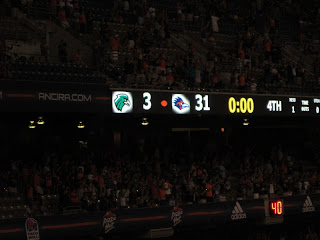 And when the final moments of the last quarter ticked off the clock, announcer Stan Kelly advised the excited attendees not to rush the field under any circumstances.  This was met by chants of "Rush the field, rush the field!" 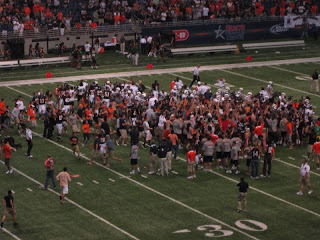 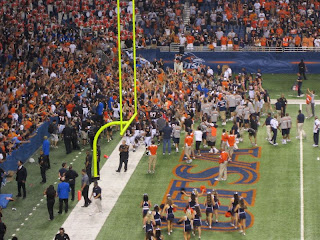 And of course, as you might expect, the student section flooded the Alamodome field in jubilation.  There were several kids chased down and arrested (or at least taken away in handcuffs) but for the most part, police and dome security allowed the celebration to happen, mainly guarding the goal post from being assaulted.  We stayed and watched the celebration for a good ten minutes before finally heading out.
Go 'Runners!
Posted by Dave at 9:55 AM

Great photo's, it really was a memorable day!

Thanks for the comment. And yes indeed; extremely memorable.

Cool, saw the Mexican wrestler today and googled to figure out who he was! He was so much fun to watch, my little ones paid more attention to him then the game!