I think it would be a good idea for one of these TV reality shows to take a bunch of blindfolded contestants and place them inside various restaurants that have had all the identifiable company logos removed and then see who can guess where they are at based upon the food.  I have come to the conclusion that all of these places, Chili's, TGI Friday's, and the ones who pay the American Picker guys to fill them up with antique or reproduction junk are all really just the same place on a different corner. 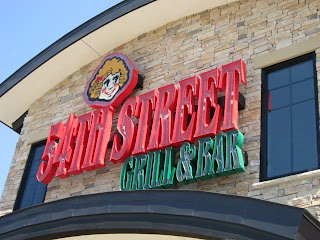 Please note: I am a huge fan of all this old junk and artwork, my complaint is that it has already be done by everyone else.  I also think it works much better when you are in a non-chain restaurant and the junk on the wall has some relevance to the town, location or family of the owner.  But enough of my little outburst. 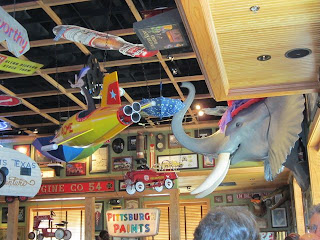 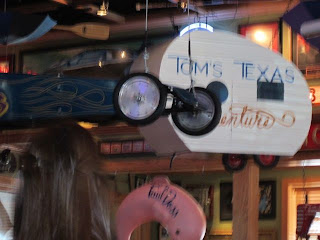 We had to run several errands in the Alamo Ranch area yesterday and since we failed to pack a lunch, we decided to stop in to the recently opened 54th Street Grill & Bar. 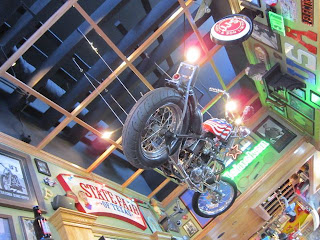 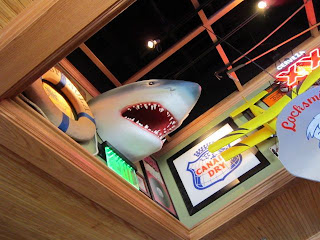 The Five Four, as they call themselves has an entertaining array of the previously mentioned collectibles protruding from every wall and shelf and numerous items including a motorcycle and race car hanging from above.
The menu was loaded with more options than you really need, and our waitress was fairly quick with iced tea refills.  These are important things.  And in spite of a very large Sunday afternoon crowd, we only waited about ten minutes to be seated and another ten minutes or so to have our food served. 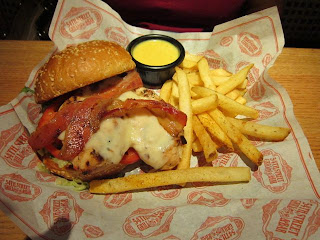 Eva had the Monterrey Chicken Grill sandwich, which according to the menu is a fire-grilled chicken breast with bacon strips and Monterrey jack cheese. Served with french fries and your choice of mayonnaise or honey mustard.  It was good and the bacon was nice and thick.  The fries were especially good because they were seasoned with something. 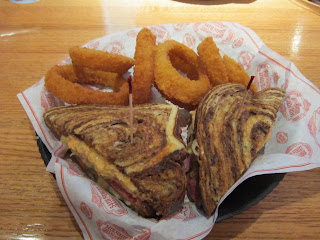 I went with the Grilled Reuben just because I love me a good Reuben.  According to Five Four's menu, it is premium corned beef thinly sliced and piled high with sauerkraut, thousand island dressing and Swiss cheese on grilled marble rye. I substituted the fries for onion rings (and pretty sure I had to pay extra for the benefit).  Stick with the fries.  My only complaint about the Reuben was the weird marble rye bread.  This isn't the first time I've been some place where they used that bread for a Reuben.  May I ask in all candor: What's up with that?  Goofy bread aside, it was an otherwise nice sammich and I'd probably order it again if a reality show left me blindfolded in the middle of the place.
One thing I noticed about 54th Street was that the bar seemed to be sealed off in some sort of glass enclosure.  My first reaction was that perhaps it was some special set-up to allow for smoking in the bar area but I'm pretty sure they are within the San Antonio city limits and there is a ban on smoking in restaurants.  Who knows? 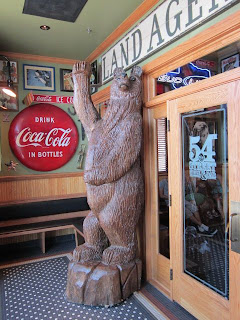 We have been to most all the restaurants in that general area and I have concluded that for me, none of them really stands out as any better or worse than the others.  I am not opposed to chain restaurants per se, but I wish that all the chains didn't seem to be exactly like the others.  The good news is, the more restaurants available, the easier it should be to get into one during the busy times, and 54th Street Grill and Bar is not a bad choice.
Posted by Dave at 1:45 PM

The other day, I had a Reuben sandwich in a restaurant in Fredericksburg, and I was a bit disappointed to see them serve it on pumpernickel bread. Don't get me wrong, I like pumpernickel, but it's not right for a Reuben. The sandwich itself was good, but, to me, a true Reuben has rye bread. Not pumpernickel. Not marbled stuff. Just plain rye bread.

And that's some good stuff, Maynard.

Albatross, try the Reuben at the Red Bud Cafe in Blanco. Amazing. best one I can find, yet. sits right across the courthouse where they filmed TRUE GRIT (the remake).

That Reuben at RBC sounds delicious - but they do serve it on Marble Rye...