I took the day off today and after doing some yard work in the morning, decided that Eva and I should take a little drive down to the town of Pearsall to grab a bite to eat for lunch.  Given our location, Pearsall is really not much more than about twenty minutes away when the traffic on I-35 is moving along. 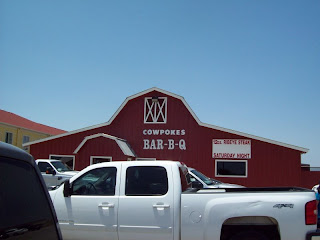 I hadn't really had a particular place in mind though on our trip to Cotulla a few months back, I bought gas in Pearsall and noticed this place, Cowpokes Bar-B-Q while we were there.  Eva was not in a mood for Church's or McDonald's, so what the hey... 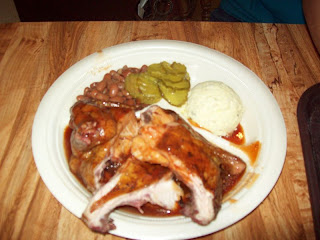 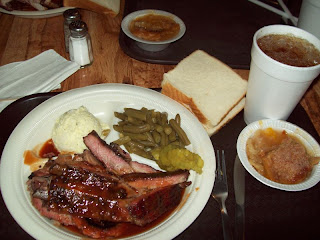 In order to try a little bit of everything, whenever we go to a barbecue place for the first time, we tend to get multiple meats and sides.  We did this time and ended up with a half chicken, some ribs and some brisket.  For sides, we had two ice cream scoops of potato salad, some ranch style beans and some green beans.  For dessert, we both got some peach cobbler. 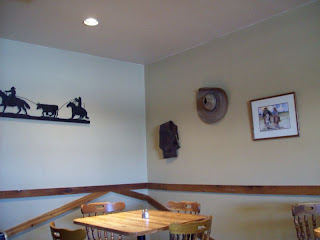 Inside, the place was very clean and the folks all seemed really nice.  As a bonus, when I went to wash barbecue sauce off my hands and mustache, the restroom was extremely clean.  Given some of the places we have visited over the years, you gotta like it when people keep the bathrooms presentable.  There wasn't a whole lot of  decor, just some standard cowboy pictures, hats and even some chaps on the wall.  Oh, I did spot a picture of George Strait who is a native son of Pearsall.  I didn't notice if it was autographed or not. 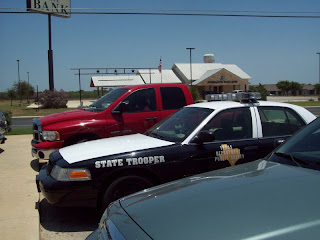 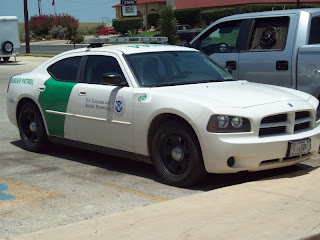 Eva got a kick out of  our dining companions.  We sat in a dining room with a group of Texas State Troopers and probably a local Sheriff at one table and several US Border Patrol officers at the next table.  We spent all day on the 4th watching Border Wars on National Geographic so she had thought it would be cute to ask if I could take a picture of them handcuffing her or something like that.  They didn't look like the kidding around type, so we skipped that.  Interestingly, as our phones began to light-up with people making Facebook comments about the verdict in the Casey Anthony trial, we were amused to see the reaction when the officers near us heard the verdict.  Yea, I think they had the same reaction most people did.
After we ate, we drove back home.

Oh, I forgot to mention how the food was.  Sorry about that.  We have leftover brisket in the refrigerator made on Saturday that I will gladly take for lunch to work tomorrow that by far exceeds Cowpokes in quality, taste, texture and whatever else you might grade in a brisket.  In fact, covered in the over watery barbecue sauce, we could not tell the difference between the brisket and the ribs once the bones were removed.  The brisket could have used several more hours slowly cooking on low temperature in my opinion.  It was hard and chewy and the taste just wasn't good.  Or that may have been the ribs.  Who knows?  Aside from the sauce, the chicken was not bad.  It was no better than what you might get at a Luby's, but the last I checked, Luby's isn't a barbecue place.
I can't say I was disappointed in the green beans.  There was nothing special about them but they were good.  Aside from the appearance, I also enjoyed the potato salad.  It was basically mashed potatoes with potato salad flavoring.  I wonder if there is a prison or an old folks home nearby; some place you wouldn't want to have choking hazards.  Again, in spite of the fact that it didn't look right, it wasn't bad at all. Finally, the peach cobbler.  Sticky, but not bad.  We should have taken it home, heated it up and put some ice cream with it.
So there you have it.  Next time you are driving through the town of Pearsall and you got a hankerin' for some good BBQ, keep on driving.  I'm sure there is some place good in the next town.
Geeze.  I hope  that wasn't overly harsh.  They seemed like such nice folks.
Posted by Dave at 5:11 PM

Email ThisBlogThis!Share to TwitterShare to FacebookShare to Pinterest
Labels: Cowpokes BBQ, I-35, Pearsall