Prompted by a conversation with a lady we met at the Rodeo, I suddenly had catfish on my mind and a recommendation for a place in Devine that has a Friday evening fish fry.  That place was called Charlie's II and we were off to find it.  The only problem was, it was Monday, not Friday, and when we found the place, it was closed.  It's funny how these things work out though, because as I was making a turn around the block, a festive colored building caught my eye and there appeared to be fish involved. 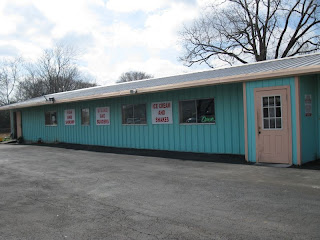 Joey's Surf N' Turf looked like a reasonable alternative for a Valentine's Day dinner and importantly, another place we had not tried. 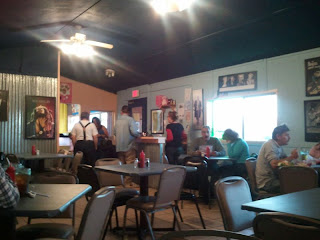 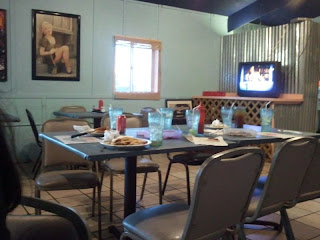 Like most of the other restaurants in this area, Joey's is fairly small.  Inside, the long room was covered in 80's posters and album covers.  A small TV was playing a Katherine Heigl movie to add to the Valentines Day atmosphere (and people seem to be watching it as if we were all sitting in the living room eating Swanson's atop TV trays) until a cook from the back came out and started flipping the channels.  Only the most romantic places for my wife. 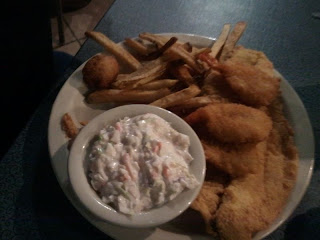 They were serving up a Valentine's special but considering that we had spent the day gorging ourselves on fried fair food, we were going to try to keep it light.  My wife ordered a fish platter that included some sort of white fish and shrimp served with Cole slaw and fries.  Both the fish and shrimp were fine, though we kept thinking that they had come directly from the frozen section at HEB.  In other words, there was nothing that would make you say, "Wow, the cook at Joey's really has a way with fish!"  The fries were okay. 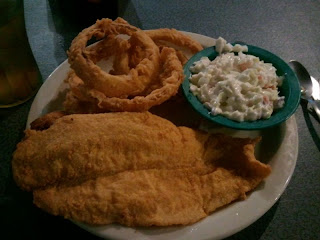 I had catfish on my mind and so when my plate arrived, I was really hoping for nuggets,but got the big huge single fillet.  Again, the taste was fine but I kept thinking that if we wanted to watch Katherine Heigl and eat "okay" fish, we could have sat at home and had some Long John Silvers imported from San Antonio.  The onion rings were okay.  The slaw was fine.

I think I need to be a more assertive diner, asking details about what I'm going to get with my order, though not assertive enough to cause a cook to want to spit in my food.  Nothing against Joey's at all, I just need to find out if I'm getting some catfish nuggets the way I like them or if they are going to serve up a plank of fish pulled from a bag in the freezer.

The good news is, Joey's menu includes burgers, and lots of 'em. The menu shows 23 different versions including things like The Dirty Chihuahua, The Big Sloppy, The Big Clucker, and The Ray Burger which is 4 pounds of pure beef and 2 pounds of fries.  Call Adam Richman, STAT!

Needless to say, we'll make a return trip to check out the burgers but I'm pretty sure we'll continue the search for a local catfish emporium. 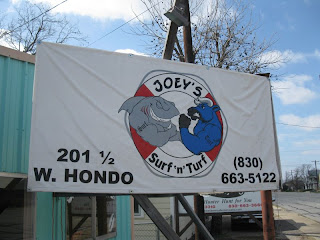 Well that didn't take long.  My wife says that my handling of Joey's was a bit harsh.  I don't think I have said anything negative aside from the fact that the Surf side of the restaurant was not remarkable.  It was not bad, just nothing to write home about.

Well, with this being a Federal Holiday (Happy President's Day everyone) I was not required to leave the house for work today.  After doing lots of manual labor around the yard, I needed some burger action and Joey's selection was on my mind.  I am so glad we went back. 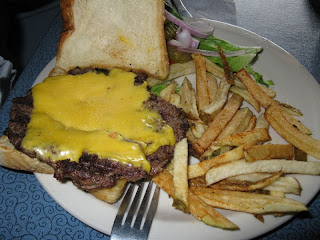 In spite of the huge selection, Eva only wanted a plain quarter pound cheeseburger.  Right off the bat, the grilled Texas toast and gooey cheese on a fresh handmade patty snapped any lingering doubts.  The mayo and mustard came in little tubs rather than packets and I liked that. 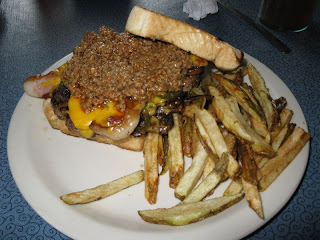 Out of all the selections (23), I ordered The Big Sloppy.  This picture simply does not do justice to the sloppiness nor the awesomeness of this half pound gut buster.  The bacon was not some processed thin little thing, it looked like there may be a pig wandering around in the kitchen missing a limb.  The burger was loaded with grilled mushrooms, yummy grilled jalapenos and Cheddar cheese and topped with some what I suspect is, freshly made chili versus out of a can.  I made several attempts at eating this thing like a regular burger, but even cut in half, I resorted to a fork to finish things.  Please don't ask for me to turn in my man card; I had a clean T-shirt on and did not want to completely soil the front with chili, jalapeno juice and bacon drippings.

This is a clear case of someone getting it right when it comes to making a burger.  There is nothing gourmet about it, just a guy in a kitchen fighting small grease fires and serving it up hot.  That friends, makes Joey's a Tasty Treat, just order up one of the burgers and skip the fish.