We took a short drive looking for a Nursery we saw advertised on a bulletin board at the Lytle HEB and after we found it, decided to take the back roads of Atascosa County to get back home.  You could so toss a dead body out in the fields along these roads probably never to be found, and that makes the drive along the winding, zig-zag turns a little more interesting.  We were never more than a mile or two off of I-35, but at times, it seemed like we were in one of those movies where the people in the theater are yelling at the screen "Turn around! Go back!"  I'm sure most of the compounds we drove by are owned by hard working folks that don't want to be bothered and there is no reason to believe they are cooking up Meth or holding a cellar full of unfortunate hitchhikers who just got into the wrong pick-up truck, but that didn't stop Eva from checking to make sure the doors were locked more than once. 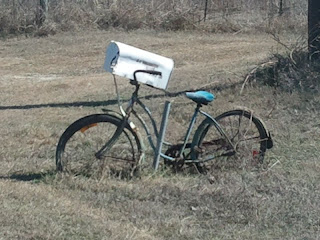 Anyway, we have identified at least a few roads we have no need to travel down again, but during the trip, we found one interesting gem.  I like the creative use of old stuff, like a bicycle for a mailbox.  And there were no signs of missing mailmen or hitchhikers, so that was a bonus.
Posted by Dave at 6:29 AM

Email ThisBlogThis!Share to TwitterShare to FacebookShare to Pinterest
Labels: Atascosa

I guess that is the consummate city slicker. I drive all over the east side without hesitation, but get me out in the countryside & I start thinking I'm in a Stephen King novel.