I was intrigued by the name and the location, but we had put off trying out the Railhead Cafe in Downtown Lytle for a while, simply because of some of the things others had written about the place.  As you might imagine, I have scoured the Google looking for new and interesting places for us to visit in this area and I really like to hit a restaurant's web page just so I can get a feel for the menu before we go in.  Several people took the opportunity to write some unflattering things about the place on the various places you can leave reviews.  I won't bother to link, but you can find them easily enough.  I'm not usually inclined to take as gospel what people write about a place, and as readers of mine have found, my opinion of a place can change from one visit to the next - probably why I would never make it as a food critic in a newspaper. 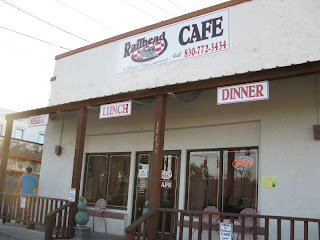 There was one thing we read about the Railhead Cafe that was absolutely true:  When you walk in, the smell of grease hits you like a freight train.  But you get used to it.  The strange thing is, the food did not seem greasy to us at all. 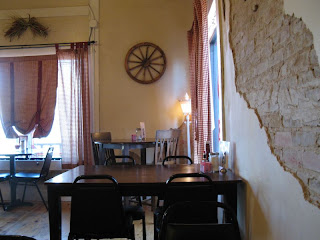 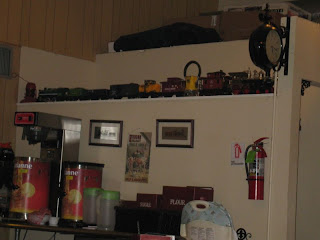 Inside, the place was filled with diners, mostly well dressed, but several as casual as we were in jeans and t-shirts and light jackets.  I liked the feel of the place with the wooden floors, train decor (obviously) and the plaster over brick design on the walls.  The cafe is not large so I can see how things could get tight during a lunch rush, but as we dined, there was a constant stream of people coming in and going out, so the service must be quick enough for people to get in, eat, and make room for the next guests. 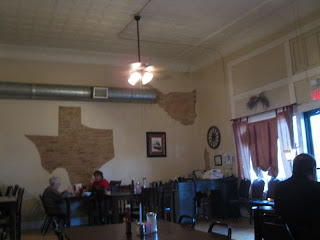 We had one serious complaint about the atmosphere, and that was the fact that it was FREEZING inside.  We had to leave our jackets on.  We could see other diners obviously cold and finally, someone got a clue (maybe because Eva loudly mentioned how cold it was several times) and extinguished the Air Conditioner that was pumping out icicles.  Let's just hope that in the summertime, they are good with cranking it the same way!
The menu offered up a wide variety of eats and I was tempted to try one of the half-pound burgers, just to get an comparison of nearby KD's.  They had different sandwiches - a BLT, a Club, and even grilled cheese available and of course, things like chicken fried steak, chicken fried chicken, steaks, and catfish.  Of course I got the catfish. 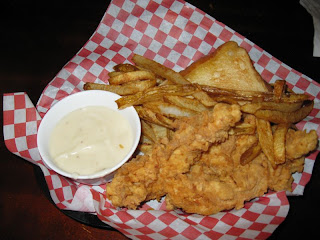 Eva ordered the chicken basket which was wonderful.  Very lightly breaded and fried, it was not greasy at all.  The cream gravy had a nice flavor to it as did the Ranch dressing our waitress brought for us.  The fries that accompanied the chicken were done just right. 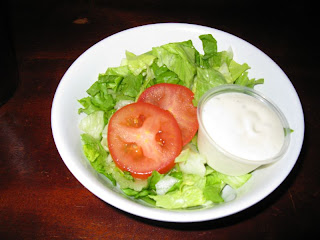 My dinner came with a side salad - lettuce, tomato slices and Ranch, and it was fine. 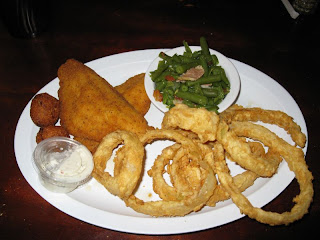 For the two sides, I selected the green beans and the onion rings.  The green beans were not bad, but nothing to brag about.  The onion rings were fantastic.  Huge, lightly breaded rings served up hot and worth ordering as an appetizer if you were so inclined. 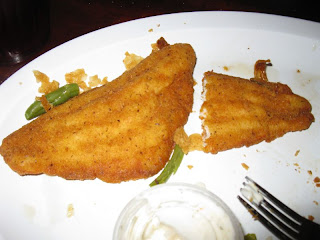 I did something today that I have never done in the history of catfish eating.  I apologize for the gross picture, but the Mrs. Gorton's-looking fish planks were simply inedible.  I don't mean to say it was not as good as other catfish I have had, but I do not leave catfish (or much of anything for that matter) on my plate.  As good as everything else was, the catfish had a simply horrid taste to it. Honestly, they should just remove it from the menu.  When the waitress asked us how things were, we said fine but I promptly asked for a to-go box for the fish.  I suspect she has seen that move before.  I'm almost embarrassed to tell you that we mixed in with the dog's food this evening.  Gracie did eat it without hesitation, but I'll keep my eye on her.
Thankfully, the chicken fried chicken basket that Eva ordered was enough for both of us and the fries and onion rings were good enough for the catfish not to ruin the visit.  We will go again and try the burgers or the sandwiches, or maybe even breakfast.  Aside from the disturbing catfish situation, we actually like the place.
Do you have a catfish horror story?  Have you smelled something greasy?  The comments button below (if it works) is waiting for you.
Posted by Dave at 8:03 PM