Several folks have asked us what we did with the tub.  It is safe and sound sitting between some trees while we wait to find the final location for it. 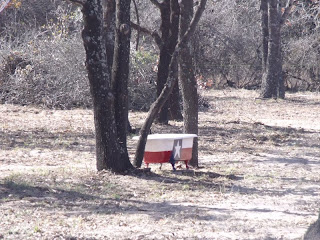 This isn't like a piece of furniture that you can move around the living room every time you get the urge for a change; the thing weighs a ton, or at least a lot.  The problem is, at this point, construction on the house isn't complete and we need to have it out of the way of cement trucks and lumber deliveries. Once the garage is in place we will have a better idea of the proper placement.  I doubt we will need to consult one of those fing sway people; we'll just know.

We made a trip into Jourdanton and Pleasanton Saturday afternoon to purchase a bunch of field fencing from Tractor Supply. We had planned for fencing to be an immediate thing but after the first few days out here, our prissy little  house dog, Gracie was pretty good about staying within the general area of the house.  But with the sand spur population reduced somewhat by Manuel and the guys at River City Tree Service, she has suddenly decided that our lot is not big enough and she needs to see what the properties next to ours have to offer.  This is a big no-can-do.  I know we may have joked a little about coyotes and such, but now that we are here, it ain't a joke.  Not only do we need to install the fence ASAP, but I'm taking the dog out at night on a leash.

Just this morning,we took a little walk and when we got to the front up by the gate I heard what sounded like a large animal walking through the thick woods across the street.  Gracie stopped and listened for a bit and when the cracking of branches stopped, she sniffed for more information.  The movement continued for a second or two then stopped again.  This was not a gopher or a skunk but something a lot bigger.  The beginning burnt orange glow of the sun was only starting to add to the light of the street light on the corner of the cul de sac across from us, so it was still too dark to even think about seeing what it could be, and I think that was enough for Gracie to decide to go back closer to the house.

When the sun was up enough for us to see everything, I decided it would be okay to let her out by off the leash.  Big mistake.  Eva walked out back with me and we looked toward the cul de sac and into the sun where the clear black silhouette of a fairly huge deer stood.  As we looked to the east, Gracie bolted to the south toward a much smaller deer that was minding its own business about 250 feet away from us.  I know, we probably would make crappy hunters since we have no skills of observation.  But the foot chase was on and the white tail deer took off and we watched Gracie in hot pursuit, running through the heavy brush trying to keep the pace.

I went back in the house and grabbed my jacket and the leash and took off after.  Thankfully, the properties are all fenced in at the street, but the internal boundaries are not.  So the worst that would happen is I would have to wander around in the woods for a while trying to track her down.  The deer would easily jump the 4 foot field fence and move along but Gracie would be confined to one of the neighboring lots.  I caught a glimpse of her at one point and thought it would be easier to get to her by reversing direction toward a clearing.  Little did I know, she gave me the slip and as I was wandering around the property behind ours, she had made her way back into our yard. 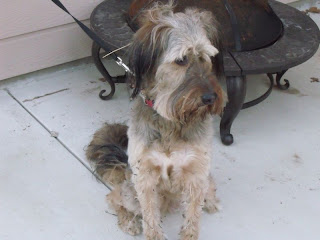 This is what she looked like after a fun little deer chase.  I wonder what she would do if she could catch it?  I suspect she just wants to be friends.

So anyway, the fence is a must because I would rather open the back door and let the dog out without actually having to go wander around the yard to accompany her or traipse through the sub-division following deer and dog tracks to find her.  And we have decided to tackle the job ourselves.  Everyone has told us that it is fairly easy.  We bought enough fence and maybe half of the posts needed to complete the rest of the property. That's a start. 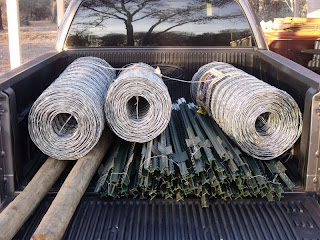 We had really great customer service at the TSC on Highway 97.  This guy named Paul helped us sort out the different options on fencing and then, when we were all sorted out, he got us all loaded up.  The truck really, not us. 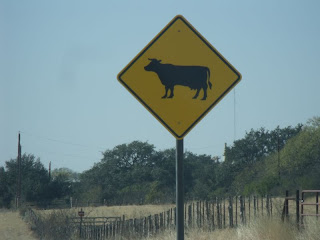 Oh, like most of this part of Texas you will frequently see deer crossing signs, but we really enjoyed this cow sign on the way to Devine yesterday.

If it was a coyote, you probably wouldn't have heard it. They know how to slink.

One armadillo can make as much noise as a herd of cattle. Deer can also make quite a bit of noise when they're grazing.

Good luck on the fence. I just want to remind you to stretch the heck out of it. We have seen MANY neighbors move out here and put up a fence to only be leaning in a year.
You may already know this but just wanted to make sure since I've seen it happen so many times.

A very reliable source reported the deer-chasing incident a little differently but I can see why you'd want to leave out the part where you were "in your jammies" whilst chasing Gracie. I get that.

So much for those rumors about us runnin' around nekkid out here. Too thorny!