Sand vs Dyson, Construction, and Spiders...

We were warned by several folks about the sand.  Actually, as soon as we started looking at houses south of Highway 90, we were hearing about the different soil types found on the desert side of San Antonio, concerns about foundations and so forth.   You hear these things and I suppose it is like hearing about what to expect when you deploy in the military.  You want the information and good advice from those who have deployed before you, but things change over the years, and that information isn’t always current.  I’m here to tell you; the sand is still here.

The first casualty was our beloved Dyson DC25 Animal.  Between the dog tracking in sand on her paws and in her spur covered coat and the fact that you cannot stomp your shoes enough to shake all the sand off before entering the house, the tile floor seems to have a constant grit to it.  After a day of running in and out of the back door, tracking in buckets of the outdoors in, sweeping the kitchen with a broom results in a small beach needing only the smell of Coppertone an old fat guy in a Speedo and some annoying flapping seagulls to complete the scene.

The Dyson was apparently built for dog hair, not a sand dune.  Somehow, the switch would not stay on, so we called the service number to find out where there might be an authorized repair place nearby.  Strangely, they were not open on Christmas.

The good news is, I did register the Dyson when we bought it, and a call to their toll free number resulted in a short trip to Powell’s Vacuum Cleaner and Allergy off of SW Military Drive and in under 10 minutes, the switch was repaired and the Animal was back in service at no charge.  Take that, sand!

We have figured out that in addition to floor mats on the outside of the doors to wipe your feet on, we need them on the inside to give a second wiping once in the house.  Perhaps we can have a lady stand by the door with a tub full of bleachy water to ensure we dip our toes each time we enter, sort of like gym class in school. 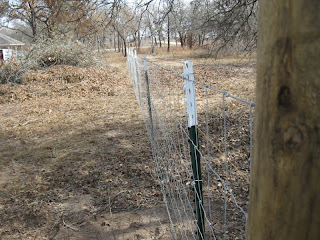 Our fencing project slowed over the Christmas weekend.  We drove around in the rain – yes, rain – on Christmas Eve trying to find a place to purchase the right type of fencing posts.  We finally ran into the Tractor Supply in Castroville on Sunday to grab some so we can finish up.  Oh, important note about trying to be a good citizen and shop the local stores. 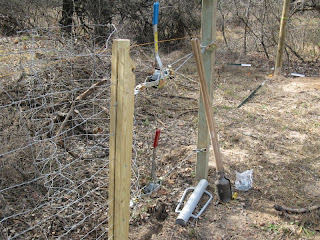 You really have to stretch the crap out of this field fence or it will look pretty bad.  I purchased a come-a-long for $44 at the True Value in Lytle.  Tractor Supply had the same one for $15.  I’m all for a little mark-up, but that’s sort of like paying $9 for a beer at a Spurs game.  I won’t ever do that again.  So far, we have about one third of the fence up.  Gracie is already feeling the walls close in! 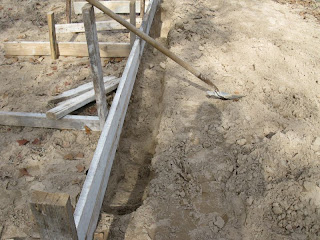 The big construction project began on Monday.  The foundation for the new garage and the slab for our patio were supposed to be poured on Wednesday but the rain sort of put a damper on that.  I think next Monday is looking like a better bet.  As we continue to unpack the occasional box and settle inside of the house, things on the outside won’t be quite right until we can get the big Pack-Rat container out of the driveway and the Jacuzzi moved from under the carport.
------<<<>>>------
What is with the incredible amount of spiders?  I’m not talking about the standard spiders that you find around any house, I’m talking about huge tarantulas that want inside and simply wait on the porch for you to answer their tiny knocks at the door.  And when I say huge, I’m not saying it in the “it’s so cute to over-exaggerate the size” kind of huge, I mean huge as in, “put up a poster because someone lost their small dog with a bunch of extra legs” huge.

My mom tells a story about staying with her grandparents at their gas station on  Gower’s Corners in Pasco County when she was a little girl and how there was a huge momma spider that lived in the corner directly above her bed.  As scared as she was of the spider, it never attacked her in the middle of the night and she just let it be.  That is heartwarming I suppose, but I also suspect they didn’t have a can of Raid back in those days.  At any rate, I’m not a fan of spiders or eager to sleep with one spinning webs above my pillow, but I do understand that they serve a positive role in the circle of life out here.  So, learning from my mother that it is possible to co-exist, my inclination is to let them enjoy the outdoors so long as they promise not to spin webs and wait for me to walk into them as soon as the sun goes down. 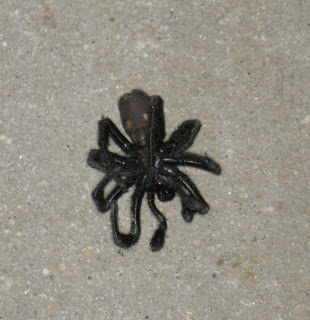 My wife on the other hand does not have a heartwarming story about spiders from her mother’s youth to guide her feelings about sharing the environment with all of God’s creatures.  She was immediately looking for a blow torch, rounds for a .22, large shoes, a long handled spatula, a Louisville Slugger and any other weapons that might assist in the battle to take back our front porch.  At one point, she grabbed the walkie-talkie from the charging station to call in an Agent Orange strike on our front yard.  I don’t think I’m overstating the fact that the woman does not care for large fury spiders.

Just wait until spring when the males all run around in the open looking for mates.  It is going to be like a Hitchcock movie out here.
------<<<>>>------
Oh, and just in case you wondered - we are back on the Internet after a long arduous ordeal, the depths of which I will not discuss further.  Twenty-four days.  I feel like I should qualify for some sort of pin.

Email ThisBlogThis!Share to TwitterShare to FacebookShare to Pinterest
Labels: Construction

Welcome back to the net. You get a medal!

Okay 24 days really Dave ..Don't let him fool you fans .. he went over the the local McDonald's or front entrance every chance he got to log in and write or check in with you all. I on the other hand went once to the McDonald's and only went via phone when on the road. While he was driving of course. If he gets a pin I get a Medal :)

Wives can be such snitches...

Get back to your FarmTown, it looks like it needs some fertilizer!

Has anyone warned you about the scorpions?