As we signed one document after another on the day of closing, the gentleman from the title company commented on the fact that we were accomplishing the task with some speed.  He said, “I guess this ain’t your first rodeo” and I had to laugh, thinking about the TV commercials for “The Hammer”, the lawyer who will “Fight for you!” (pronounced “ewe”).

We have moved before and we are all too familiar with the minor frustrations associated with establishing a new residence.  We laughed mightily, for instance, when the U-Haul trailer got stuck, half on the drive-way when trying to maneuver around one of the Pack-Rat containers sitting in the drive-way.  And we giggled up a storm when the truck pulling the U-haul trailer got stuck in the sand (trying to find a different way around the Pack-rat container sitting on the drive-way).  These are all things that just happen and you simply can’t sweat it.

Going into the move, I learned a few days before that when AT&T installed the phone line on Friday, they would not be able to install the DSL service for at least a few days after the line had been established.  This is the price you pay for moving out in the middle of nowhere.  But, thankfully, with our Blackberry’s (from Verizon), we would still have access to e-mail and, like I am doing now to post this blog entry, we could hit the free Wi-Fi at McDonald’s.  You would think that with all the work to be done, there would be little need for much more access to the outside world than all of that, right?

It didn’t hit us that we have no cell coverage in our new house until our tree guy called trying to get directions to the place.  I ended up walking to the front gate, standing in the middle of the street on one leg and holding the phone due south before I could get a bar and a half of the red map Verizon keeps showing us on their commercials. Let me tell you something, that map could have 99% of the country in red, but if you just bought a house on the 1% of white, you are now the proud owner of $200 a month matching paperweights shaped like Blackberry’s.

I had all of these ideas in my mind about walking to the neighbors house half a mile up the road and not asking to borrow his phone, but his cell coverage.  We did all sorts of little experiments, like walking onto different pieces of the property to see if we could get an extra bar or two.  I seriously thought about climbing up on a telephone pole like The Douglas’s in Green Acres just to make a call.  But, not to worry.  We would be getting the AT&T landline on Friday and at least we would have a link to the outside world!

I thought about going into great detail, the efforts that I made to confirm that AT&T would be installing my landline on Friday, but suffice it to say, I got two confirmations on Friday that the installer would be there by 8PM on Friday.  I even explained my crappy cell phone service and let them know I would be checking my messages (one leg, middle of street, facing due south) so by all means, have the technician let me know if there was a problem.  Long story short, no AT&T on Friday and know messages explaining why.

On Saturday morning, I drove into Lytle and sat in the parking lot of McDonald’s to get all the e-mails that my paperweight won’t receive out at the house.  I also made numerous calls to AT&T’s automated phone service that uses interactive voice to route your call to the most convenient way to hang-up on you.  I spent half-an hour calling over and over to try to trick the computerized voice into letting me talk to a real person, but it just wouldn’t happen.  I could seriously feel my blood pressure going up, not because we didn’t get our phone, but because it was so frustrating trying to outwit the stupid phone tree.  I guess that says something about me.

The other issue in the back of my mind was that, the longer it takes to get a landline at the house, the longer I have to wait to get the DSL going.  I am so seriously considering other options at this point.

Later, we had gone by my mother-in-law’s house and I used her phone to go through the entire routine again, but this time, instead of telling the computerized AT&T guy that I was a customer, I told him I was an employee needing assistance.  This got me through to an actual person.  I explained to him my dilemma and he was kind enough to tell me the truth:  There was nothing he could do, but he would connect me with someone who could help.  He then put me through to a very nice lady who was equally concerned about the fact that she could do nothing for me, but she was going to connect me with the dispatcher who could get to the bottom of things.  Unfortunately, the “dispatcher” was the AT&T computerized voice guy who helped guide me to the most convenient way to be hung up on.

I seriously thought I was going to have a heart attack.  I don’t mean that in a “I was so mad I could spit” way, but seriously, “somebody hand me a baby aspirin and call 9-1-1” way.  It was time to just let it go.  We are not getting phone service over the weekend so I had to just let it go.

My son and his wife were in town, so while the ladies were out doing baby shower activities, he and I ran to do some errands.  I had calmed down enough to go into an AT&T wireless store to beg someone for a secret number to a real person, but even they say that whole thing is a myth.  There is no secret number to where they have an actual person who can assist you.  Only the computerized voice who reminds you to go to att.com for better service.  I’ll tell that to my Internet Service Provider.

We did go into the Verizon store.  Why not?  If I’m going to drop dead from stress, I ought to be able to blame two phone companies, not just one.  Turns out that if you do a *228 on your Verizon phone every 30 days, it does some sort of cell tower update.  That’s great.  But I still don’t have cell phone access at my house.  The real kicker is, my daughter-in-law walked into the house with her iPhone from AT&T and had 5 bars.  Salt in the wound.

So, I know we can’t be the first people in the history of cell phones to move to a place where one provider doesn’t work at all and another provider does.  Is there a way to get some sort of roaming deal where I can pay a little extra and use AT&T’s tower?  I already know that I would have to pay some outrageous fee to get out of my Verizon contract.  The Verizon guy told me they sell a device for $249 that connects to the Internet and is supposed to enhance your cell coverage around your house, but I have read mixed reviews. 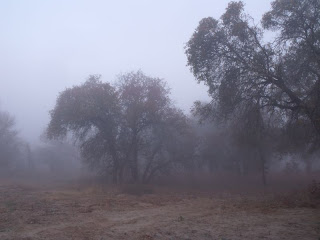 The first morning we woke up to the view from our bedroom window.  The fog was just beginning to lift leaving the trees in a misty haze. 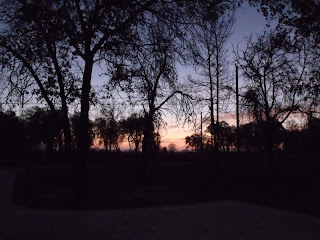 The view from our front drive-way looking East as the first hints of sun peer through the trees and oddly enough, telephone lines.

It is so quiet out here that only the sound of a train in the distance reminds us that we aren’t a hundred miles from everything.  We have so much work to do but it is good work.  Work that takes your mind off cell phones and Internet and landlines.

You should be able to get released from the contract due to them not having coverage where you live. Good luck on that one, though. If you've got enough land, maybe you can cut a deal with Verizon to put a cell tower somewhere on the property.

I am so far out that I can't even get DSL service. I have Internet America. Just another option for ya.

Dave;
Looks like you might be in Rock Solid Internet's service area. I've had them for going on 3 years and love it.
http://www.getrsi.com/osb/showitem.cfm/Category/7

Not affiliated, just a customer who spent years and $$$ on crappy satellite service and prior to that *shudder* dial-up.

Oh yeah, I forgot to mention to Eva that we couldn't get our brand new cell phones to work in Great Oaks subdivision of Natalia. It was a nightmare that I suppressed from my mind. I also couldn't get service on my way to work in Jourdanton or in the town of Jourdanton. I had a blowout once and was lucky to get an Ingram Readymix truck to stop and help me. I'm so glad that we moved back to San Antonio. That was years ago, like 6 years! ha ha
Lydia