It will not always be like this.  When my parents built our home in Florida, I remember the excitement of all the activity that takes place when a new development goes up.  Coming home from school every day to find a new foundation poured or the cinder block walls of a house going up.  We thought we lived out in the country, and we did, sort of.  I have fond memories of the woods that surrounded our sub-division in Brandon; riding bikes on the trails, shooting BB guns and climbing trees.   But years later when our sub-division was built out, the woods surrounding it would become valuable property for new home builders.

It is rare that I can get back to Brandon but when I do, I drive by that old neighborhood.  Not necessarily our old house, but the houses that occupy those woods, and I swear I can recognize sections of trees that represent landmarks from my youth.

What I liked best then and what I love about this place is the morning.  I suspect my days of setting up a tent and camping are behind me.  I don’t miss the feel of sleeping all night on uneven ground or an air mattress attempting to replicate my Tempurpedic, but the mornings where the air is a bit hazy from the fog and the sounds of nature are things that make an uncomfortable night in a tent worth it.   And we have that out here, without the discomfort of a root poking through the thin tent floor.  There is rarely the sound of traffic, but maybe you can hear a deer rustling in the nearby brush on a path through the area.  That’s some traffic I can live with.

It will not always be like this but even when the place is built out, the fact that these are not your typical postage stamp-sized lots, there are still trees and there is still room to breathe.  We may not have the view on all four sides of the house in 10 years that we have now, and perhaps the coyotes won’t come as close as they dare to today (this morning in fact), but I suspect things will still be quiet.
------<<<>>>------
Being a whiner is generally an unbecoming characteristic and I suspect it wears thin if all you want to do is read a few blogs and see what is happening out here.  I promise, if you indulge me for just one more segment of bitching about not having access to the Internet, I’ll do my best to let it go.  I may have to seek out a Yoga Master to teach me the art of releasing the bad energy, but I won’t speak of it here, again. 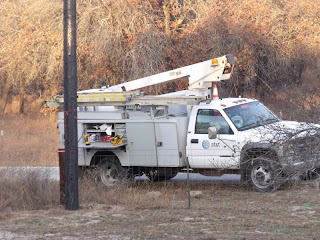 Importantly, we do have phone service.  I can’t even begin to convey the frustration involved in getting to the sound of a dial tone only 11 days after the scheduled start time, but that isn’t important.  Nor is the fact that we still don’t have Internet, after all, McDonald’s hasn’t seen this much of me since I was a 16 year-old working at one.   If we are lucky and the stars align, perhaps by New Years Eve…

The Verizon phone service is resolved.  This is sort of interesting if you care to hear about it.  Let me caveat this by saying that we have always had good service with Verizon and even when we got some bad phones, they worked with us to easily resolve things.  I remember that stupid Chocolate phone I had.  Worst phone ever!  And when both of our Blackberries crapped out on us, they replaced them, little to no questions asked.

I had called weeks ago to initiate an engineering study on why we don’t get fabulous phone service out here when, if you see their commercials, they have coverage everywhere.  I called back a few days ago and they had completed the study.  I asked what the result was, and the lady read the notes and the result was that they could not locate my house, so they closed the study.
Everybody, say it with me: WTF?

So I spent 20 minutes on the phone with a Google map in Satellite view trying to guide the Verizon lady to where my house was.  That was the easy part.  The hard part was convincing her that Interstate-35 and a specific exit is the closest landmark I could give her short of saying, “turn left at the house with the brown horse”.

Anyway, throughout this process, Verizon people have offered to give us this home cell tower that you connect to the Internet for free.  It normally runs $249, but to get the matter resolved, three different people I talked to offered to send it out overnight for free.  Each time, I explained to them that I don’t have Internet.

Finally, on Wednesday, they called me and said they were releasing me from the contract,  14 months early because they could not provide us with the service.  I asked if we needed to send back the phones (they were just replaced less than 2 months ago), and they said not at all.  Wow.  I was shocked.

When I got home, we talked about it and my wife suggested that we ask them to at least try the little cell tower that connects to the Internet, since, we assume that someday, we will once again have access to the Internet.  So Thursday, I called Verizon.  Told the lady that we were willing to go back into our contract and give the little cell tower Internet thing a try.  She asked if that would be cash, check or charge for the $249 and I nearly blew a gasket.  I explained to her all the offers from people to send it out for free so we could resolve the “engineering issue”, but she was having none of that.  Let me get this straight, I said to her.  You want me to pay $249 dollars so I can connect to Internet that I am paying for so I can have the privilege to pay $200 a month for service that you can’t otherwise provide?  She said with what sounded like a straight face, “Yes.”

So, we have been released from our Verizon contract and sometime in the next few weeks we will go to the AT&T store and get new phones.  Perhaps I’ll bundle my cell service with my home phone and Internet, though I’ll probably have to go online to make that happen.
Okay.  Whining is done.  Thanks for your patience.

------<<<>>>------
We’ve started the fencing project.  Our daughter is home on leave and staying with us so we got her and my nephew who loves to visit out here, to help get started putting it up. 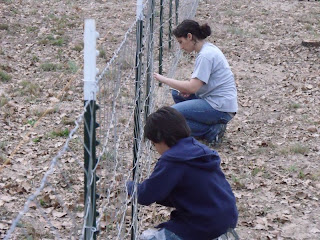 We are regular ranchers.  Hopefully this will keep our herd of one dog in the yard.

Well, having a phone is a good thing. Now you can call from a cell phone instead of standing on one leg in the street to ask why the heck your internet hasn't been set up yet.

With luck, you'll get lucky on the land, too. Poteet isn't really that built up; it surprised me to find that when I moved back here, given that even La Vernia now has a bunch of commuters & a Sonic.

The early mornings out in the country are what makes living in South Texas worth the 100-degrees-plus summer temperatures. That and all the stars you can see at night.

I figure after you get the internet set up and have your AT&T cell phone, you'll begin looking into raising chickens or getting a couple of beef. SMILE