...I am a glutton for punishment.

If I had access to the Internet, I would quickly Google that quote about “Insanity” being defined as “banging your head on the wall repeatedly expecting a different outcome each time”, of course, without Google, I have no idea what the exact quote is for sure.  For all I know, I just defined being a glutton for punishment.

At any rate, I trust many of you have returned to find out just how thankful we were to get our phone installed, Internet connected and our cell service restored to full capacity.  Perhaps your return is just a tad bit premature.

On Monday, I called AT&T from work to figure out just what the heck was going on.  I was frankly pleased with the honest answer that it could be a few weeks before we would have service. 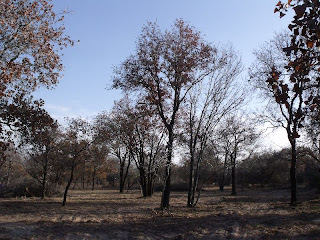 In fact, if it had ended there, I would be sitting here telling you about the wonderful landscaping action that has transformed our overgrown land into a beautiful park-like yard in a matter of five days.  Oh sure, I’ll get to that, but first, you simply must read about Carlos and Miss Lisa.

Carlos is the guy from AT&T who called me on Wednesday, completely unprompted by me, to tell me that he would have a guy out Wednesday afternoon to run the wire from the street to the house followed by a guy on Thursday morning or at the latest Friday to hook up the phone lines.  Sweet.  For a brief moment, I thought that the corporate leadership in Dallas had been doing random Internet searches looking for disgruntled customers only to find my small blog and, upon reading my displeasure, provide me with excellent customer service.  I was so excited about it, I asked Carlos about my DSL status.  Carlos was not aware that I had ordered DSL, but not to worry, I could go to Best Buy and get a modem, and by the time the guy finished installing my phone line no later than Friday, I would be online Googling irrelevant quotes and deleting Spammed e-mail messages announcing that I had won the Yahoo.com Lottery.

When I called my wife and left a message on her cell phone announcing that an AT&T employee would be at the house before long, she quickly ran into the middle of the street, stood on one leg while facing due south and called me with crappy cell service to announce that there had been no sign of any AT&T people all day.

And so it would go on Thursday and Friday.  On Friday afternoon, I decided just for fun to call the computerized AT&T phone voice just to see how many different ways I could be hung up on, but in fact, after only a few short prompts, I was speaking to Miss Lisa from 12 degree weather in Indiana.  Miss Lisa told me she is 54 years old and that is simply too old for 12 degree weather.  She is also a Virgo, likes long walks on sandy moonlit beaches and is partial to bourbon, neat, during her afternoon break when nobody is looking.  Okay, some of that stuff I made up, but the point is, Miss Lisa was a very friendly lady, and she and I developed the type of quick phone relationship that promises quality customer service.

So about quarter till 7PM, I put on my pink furry slippers and headed out to the middle of our street with my Verizon Blackberry to do battle with the AT&T Computerized Voice.  Here is a little tidbit you may not know:  If you are expecting someone to show-up by 8PM and the computerized voice tells you that the technician will arrive by 8PM, in spite of the fact that it is already dark, you do not have any option to speak to a human without first being hung-up on and calling back.  On my second call, I entered my ticket number and convinced the computer that I needed to speak with the dispatcher.  It was still 6:50PM according to the people at Verizon, but the AT&T dispatcher who closes shop at 7PM was apparently joining Miss Lisa at Happy Hour, because I got the automated hang-up again.

I did call the number for emergency service and was told that my wait could be up to ten minutes.  Hey, it isn’t like I was gonna go in the house, make a few calls and surf the Internet, so why not stand out in the middle of the street like an idiot listening to staticky Muzak and hints on how I can pay my bill online?

Unfortunately, Verizon thought otherwise and instead of being hung-up on by AT&T, I was nailed by Verizon’s lack of coverage in my area.  It’s just as well.  I have decided not to even think about it this weekend.  If someone shows up and we get phone service; great.  If not, I’ll start looking into the several options that others have suggested to me on Monday.

I do appreciate the suggestions and the comments on my previous posts.  I promise, once I’m actually online for more than the time it takes to go through the drive-through at McDonald’s I’ll respond to the comments.

That quote is from an American author named Rita Mae Brown. She wrote it for a character in a book, and that character may have been written to be insane as well, for all I know.

I cry about it here.

This is why we told ATT to go **** themselves and went with TWC. Insane waits for bad service should not be rewarded, unless you're at a Spurs game. Apparently, ATT still thinks they have a monopoly and act accordingly.