We took a short drive into the small town of Natalia today.  The population is only about 1,600 or so but the place seems smaller than that.  I had called the post office ahead of time to ask what paperwork I would need in order to get a mailbox set-up.  The place we are moving to uses those mail box clusters so we will need to get a box assigned and some keys. 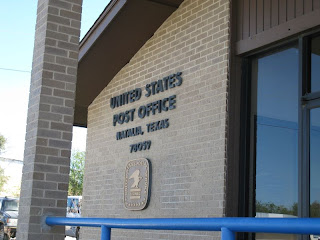 When we walked in, the older guy behind the counter reached for a card and started to hand it to me before we could even explain what we were there for.  He said, "You called about an hour ago, right?"  Holy crap!  This guy not only knows all 1,600 residents, but he can even tell what people look like over the phone.

Wow, you did move out to the middle of nowhere! I'm almost jealous. (Too much of a city girl in the end, though.)

You've never lived in a really small place before? I grew up in a place like that. I really like living in Louisville now for 41 years. SMILE

How I remember that post office! The guy there offered me a job when I walked in saying I needed to come in at 4 in the morning or one of those ridiculous times in the morning! I would be paid about $5 an hour for about 3 hours handling mail! I said, no thanks, I have a real job in the city. ha ha ha!
Lydia

I wouldn't be too surprised that he remembered you called, it was probably the only phone call he got the entire week!